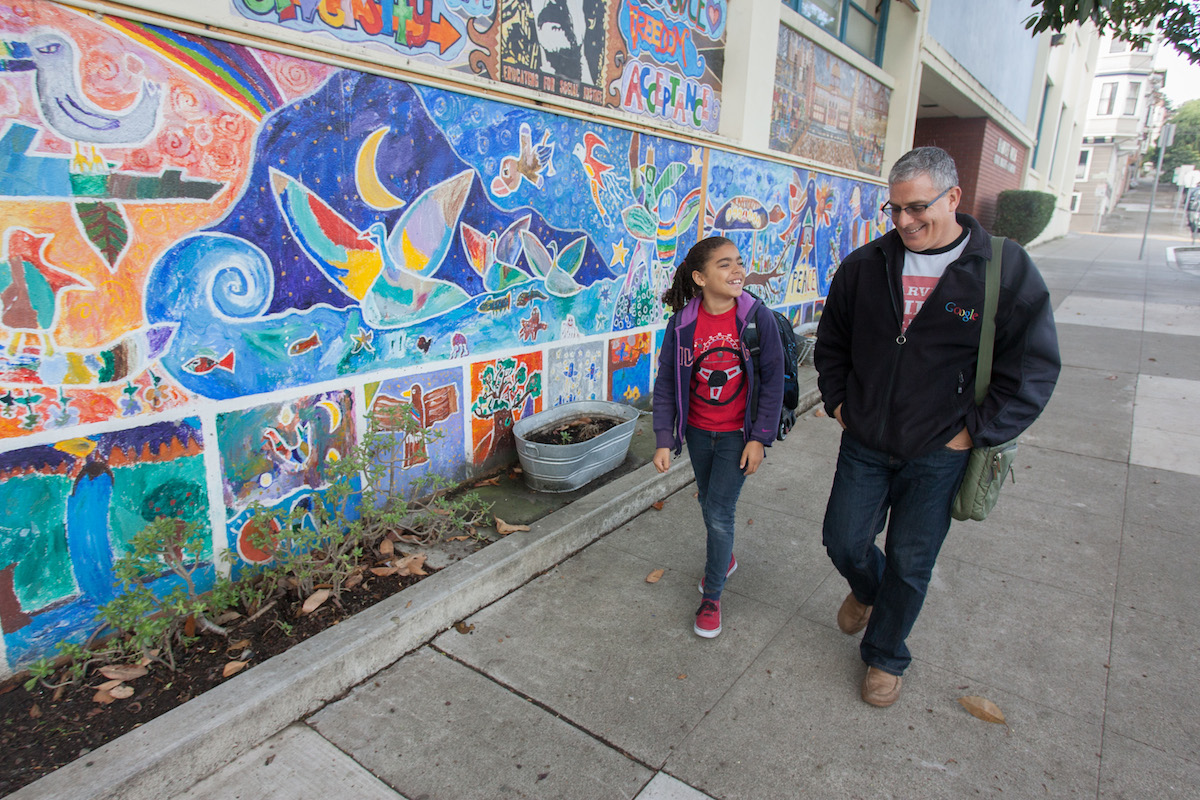 Part of a special report on education inequality in San Francisco. A version of this story ran in the winter 2014 print edition.

Ana Hernandez and Barry Schmell come from very different backgrounds, but they have at least one thing in common: They both lead their schools’ parent-teacher associations — Ana Hernandez at Junipero Serra Elementary in Bernal Heights, Barry Schmell at the Harvey Milk Civil Rights Academy in the Castro.

Once upon a time, PTAs held bake sales to pay for field trips and annual gifts for the teachers. Those days are gone.

Parents at some schools have personal wealth and other advantages, such as better language and organizational skills. Fundraising has become an essential part of public-school finance in San Francisco — and that is triggering far-reaching changes in the culture of the schools. Barry Schmell’s daughter, Jonesy, attends fourth grade at Harvey Milk Civil Rights Academy, which raised more than any other elementary school in the district in 2011 — but in subsequent years lost funding. Schmell is divorced from his adopted daughter’s other father, and works from his home in the Castro as Google’s senior technical instructor and course developer. The job gives him flexibility to be deeply involved in his daughter’s life and education. Schmell was raised in Baltimore, the youngest of five in an Orthodox Jewish family, and studied at the Applied Physics Lab at Johns Hopkins. “I grew up in a home where my mother was the PTA president,” Schmell said. “I grew up stuffing envelopes in our living room, and so I kind of feel like that’s part of school. I was surprised that public schools in San Francisco required so much fundraising.” Ana Hernandez, seated second from left, is PTA chapter president at Junipero Serra Elementary in Bernal Heights, where her daughter Jasmine (far right, next to her big sister) goes to school. Hernandez emigrated from Guatemala in 2004, fleeing poverty and a society shattered by 50 years of civil war. Today, she supports the entire family working 42 hours a week as a cook in Burlingame. Her husband, Byron, lost one of his fingers in an accident on his job as a laundry mechanic, and as a result he is out of work. Despite her inflexible and demanding schedule, Hernandez said she stays involved with the PTA because it gives her life meaning and community. But for the family to make ends meet, she needs a second job. If she succeeds in finding one, she said she would have to quit leading the PTA. During “morning circle” at Harvey Milk Civil Rights Academy, Schmell shows off invitations to a roller-skating party fundraiser. He and members of the Parent-Faculty Club aim to raise $50,000 for supplies, field trips and arts programs this year. “It isn’t just the fundraising — this is my community,” Schmell said. “I have amazing relationships and experiences through the school.” The families are diverse, and Schmell and daughter Jonesy know others who are like theirs: multiracial, with gay parents and adopted children. Ana Hernandez serves food at a monthly dinner party hosted by Junipero Serra’s PTA. She first got involved by working on the school’s food bank, distributing food to hungry families. This school year, the PTA aims to raise around $7,000 to support field trips, buy computers, get gifts for the teachers and underwrite the fifth-grade graduation project. The PTA also sets aside part of that fund to support Junipero Serra families facing economic emergencies. Because almost all the school’s families live in poverty, their financial contributions tend to be modest. “They can help with one dollar, two dollars,” Hernandez said. “Even when they have no money, people help in different ways.”

3. Building Community in a Time of Budget Cuts Schmell shows off the school library to a group of parents who are considering sending their children to Harvey Milk Civil Rights Academy. By giving tours and organizing frequent “fun raisers,” Schmell is working to revitalize a school that has struggled around issues of funding equity, race and social class, as well as management. A nonprofit organization, Friends of Harvey Milk, was one of the top fundraisers in the city, spending $380,000 a year, almost exclusively on before-school and after-school enrichment programs. But that collapsed in 2011 after key supporters withdrew, leaving the school with little fundraising infrastructure. “If we had everyone at Harvey Milk give $250 for the year, then we wouldn’t have to do severe fundraising,” he said. “I’m very concerned about technology. I’d love for us to have a computer lab, and we need to do a targeted fundraising campaign for that.” After years of cuts, the Junipero Serra library now has an annual budget of just $500. Many parents said the library was actually improved in recent years, thanks to book donations and volunteer efforts. Even so, the shelves feel underpopulated, and the room under-used. With a limited budget, Principal Evelyn Cheung had to make hard choices, so she prioritized the computer lab and technology training for the kids ahead of other costs. Hernandez supports Cheung’s priorities, and the PTA has been able to buy computers for the lab. “Some people think the government pays for everything at school, but it’s not like that,” she said. “I try to explain to the parents: We have to make fundraising, because that is how we can help the school.” Harvey Milk Civil Rights Academy is named after California’s first openly gay elected politician, honored by a shrine in the hallway. Milk briefly worked as a teacher and made his name successfully campaigning against the 1978 Briggs Initiative, which would have required California schools to fire gay and lesbian teachers. Though the school named after him has experienced internal divisions and incidents of homophobia (Barry Schmell was once forced to delete anti-gay comments from the school’s Facebook page) today it is a key institution for the Castro’s diverse families and is a financial beneficiary of the annual Castro Street Fair. When the school was vandalized, neighborhood businesses and residents donated $15,000 through its well-designed website to help repair the damage and buy school supplies. A Central American indigenous dance troupe from the University of California, Berkeley, leads a “friendship dance” at Junipero Serra’s annual fundraiser, which this year netted $3,000 — almost half the PTA’s budget. Most of Junipero Serra’s students are immigrants or the children of immigrants, mainly from Latin America. So all gatherings are conducted in both Spanish and English; parents and staff said bonds between immigrant and native-born communities are strong. Parents in both groups make a conscious effort to build community across cultural and linguistic barriers, Principal Evelyn Cheung said. “These are not isolated groupings,” she said. “They work together and they’ve built trust.” “I waited tables in college, and I hated pooling the tips,” Schmell said. This memory makes him reluctant to support a system in which San Francisco schools would share the money raised by parents and redistribute some of it to lower-income schools. His connection to Harvey Milk Civil Rights Academy and to the Castro is strong, and that is what motivates him to give. The same is true for Castro businesses that support the school. They might not give as much if they thought their money was going to children in other communities. “But maybe it would be better for us,” he said. “If other people are able to do more, then we’ll benefit from that as well.” Sometimes, at the Italian restaurant where Hernandez works, a customer comes to the kitchen to give a tip directly to her, in appreciation for a delicious meal. She always shares the tip with the other line cooks. “Everybody’s working hard,” she said, “so we share.” Waiters also pool their tips, she said, because “the bus boy, the person working at the bar, the cooks, they are all working hard.” All the families at Junipero Serra Elementary School work hard, she added, even if they make very little money. If schools shared, she said, everyone would benefit. “I think it’s good, because you give opportunity to all the kids.”

Luke Thomas is a photographer and publisher of <a href="http://fogcityjournal.com">FogCityJournal.com</a> an online news organization founded in 2006 and committed to delivering coverage of news and politics in San Francisco and the greater Bay Area, with a focus on local issues that have a broader impact, and broader issues that have a local impact. Thomas, a former computer consultant from England, was naturalized a U.S. citizen on September 11, 2001.

Tearsa recently graduated from San Francisco State University with a bachelors in photojournalism and a minor in international relations. She hopes to travel visually documenting world issues and humanitarian efforts. Immigration reform is her area of interest and expertise.