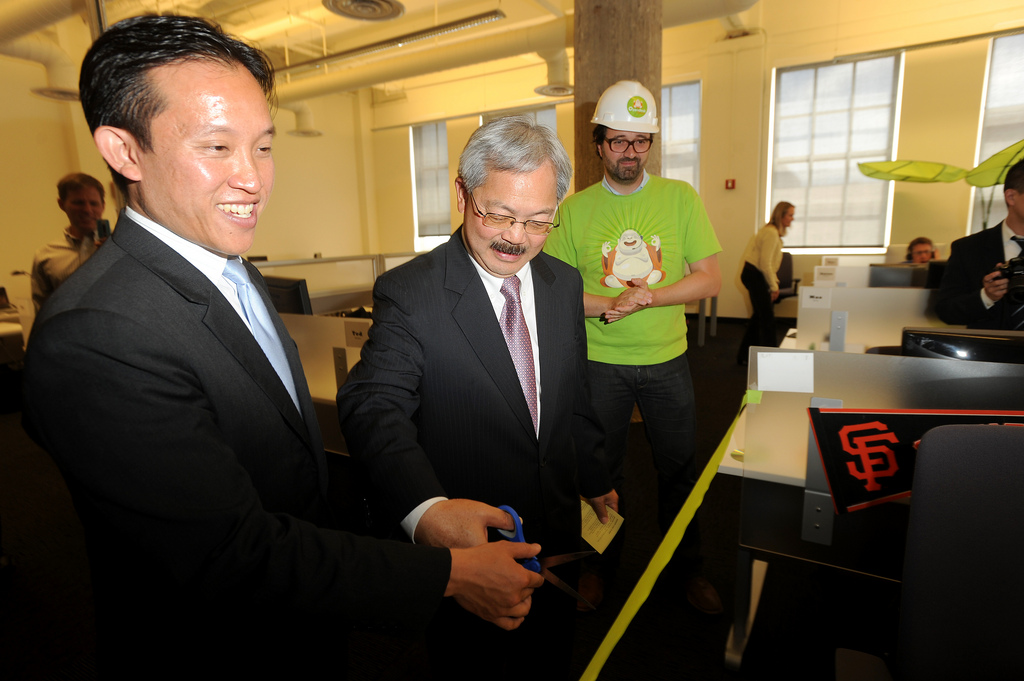 The largest of the firms settling in mid-Market signed extensive community agreements, but critics call them toothless

Last year, 14 San Francisco technology companies received $1.9 million in tax breaks for setting up shop in the mid-Market Street area. Supporters said it was a good investment, bringing economic development and jobs to an economically depressed strip in the core of the city.

The zone is certainly coming back to life, and the companies that benefited now employ more than 2,700 workers. But it is less clear that the deal resulted in entry-level jobs for residents of the hardscrabble neighborhood — one of the goals most sought by skeptics of the tax break.

The largest six of the companies promised a list of community benefits that included an effort to identify qualified job seekers in the Tenderloin and mid-Market area. But the agreements are vaguely worded, the companies have been slow to report their progress to the city, and most were unresponsive to direct questions about employment practices.

But the City Administrator’s Office requires compliance with only 80 percent of the memorandums’ provisions. While “binding,” the documents call for a “good-faith effort” by companies to follow through on their community obligations.

One provision asks the companies to “partner” with a program that identifies entry-level jobs for local residents. But signatories — many of whom were late in filing quarterly reports to the city this year — are under no obligation to report whether that resulted in any actual jobs.

Supervisor John Avalos, a skeptic about the tax breaks, said the loose wording means tech firms got something for nothing. He said their promises to the community in exchange for reduced taxes were “barely worth the paper they’re written on.”

Within three months of taking office in January 2011, Mayor Ed Lee worked with the Board of Supervisors to pass a payroll tax exclusion law for technology businesses in the mid-Market and Tenderloin areas. It allows the companies to avoid payroll taxes on new hires for six years. Under the subsequent deal on community benefits, companies with payrolls of more than $1 million get the tax break only if they enter a community benefit agreement with the city.

“The community really had high hopes for what the agreement was going to do, but I think, frankly, it isn’t the strongest,” said Blitzer, who until this year was a senior project manager at the nonprofit Tenderloin Neighborhood Development Corporation, and has since taken a government job.

The agreements call on companies to use the First Source Hiring Program, which was set up in 1998 to funnel “economically disadvantaged” city residents into entry-level jobs. The program is primarily geared toward major city-funded contracts, public works and business activities needing building permits or planning approval. The community benefit agreements ask technology firms to “partner” with First Source.

Representatives from some of the biggest tax break recipients — Twitter, Zoosk, 21Tech and Yammer — declined to comment on the status of their agreements. Zendesk, a customer service software firm, and One Kings Lane, a home decor company, did respond to questions. Both said they had not hired any employees through First Source.

Raquel Redondiez, a legislative aide to Avalos, said one of the problems is a lack of follow-up by the city. Until this year, she said, First Source had no budget for a dedicated enforcement staff.

The Board of Supervisors created the payroll tax exclusion after Twitter indicated it was considering moving its expanded headquarters out of San Francisco. The breaks applied to any business within a tax zone area straddling Market Street from Sixth Street to Van Ness Avenue, including some side streets.

The idea behind the community benefit agreements was to mitigate gentrification as tech expansion raises rents for neighboring businesses, residents and public amenities.

The companies are required to report the status of their agreements quarterly to the City Administrator’s Office. Incomplete provisions must be carried out the following year, said Bill Barnes, the office’s project manager.

But Avalos said the community benefit agreements were weak because the city created them after passing the tax exemption. That left little room for negotiation with technology firms.

“It could have been stronger if we were building our tax breaks contingent on stronger community benefit agreements,” he said. “If the agreement comes afterward, then obviously it’s not going to be as strong as it could have been.”

The requirements should be sharpened, said Dina Hilliard, executive director of the North of Market/Tenderloin Community Benefit District, a nonprofit group providing beautification and safety services.

“The existing agreements clearly are not utilized in a way that is customized to each company’s strengths,” Hilliard said. “Unfortunately, we can’t mandate them to hire locally, because the neighborhood might not have the skilled candidates these companies want.”

For many low-skilled neighborhood residents, the education and experience qualifications for entry-level jobs may be too strict. Some neighborhood job candidates lack regular access to computers, hampering the online application process.

The Central Market and Tenderloin Area Citizens Advisory Committee, which advises the mayor, Board of Supervisors and the city administrator, agreed that a strict hiring mandate would be impractical, because Zendesk requires highly skilled workers, said company spokeswoman Tiffany Apczynski. She said most office jobs require advanced degrees and years of experience. In any event, First Source would not help with neighborhood hiring, since it is available to all city residents.

Instead, Zendesk decided to fulfill its “obligation to the neighborhood” under its agreement by offering two paid marketing internships for clients of local nonprofit groups such as the Vietnamese Youth Development Center.

The company also pledged to work with TechSF, a citywide workforce training initiative, to host networking events for employment trainees. It has invested $15,000 in community event sponsorships, and says it is on pace to spend about $120,000 in the community this year.

One Kings Lane has identified entry-level positions in customer service that could be filled locally, spokeswoman Stephanie Pettinati said.

But Avalos sounded frustrated by the paucity of job opportunities for locals. He said he would push for an overhaul of local hiring laws.

“As far as we’ve heard, there’s never been any kind of penalty for someone who doesn’t follow the First Source Ordinance,” Avalos said. “There is this belief that if you support big businesses, then the benefits will trickle down, which doesn’t actually do much for the community.”

Hilliard questioned whether community benefit agreements were even good ideas in the long run: “I want the city to sit down with the company and come up with a customized plan on how they are going to provide community benefits.”

Brightline Defense Project, a nonprofit organization based in SoMa that promotes environmental, economic and social sustainability in low-income neighborhoods, is pushing for reforms to require more than just “good faith” efforts to make local hires.

In 2010, Avalos sponsored one such successful effort. The ordinance mandated that an increasing percentage of city residents be hired for city-funded construction projects.

Joshua Arce, Brightline Defense’s executive director, said the city has been “rolling out a red carpet” for technology companies through special tax treatment.

Hiring programs, he said, should require “job guarantees and a track record.”

“We’re seeing the beginning of a renaissance,” San Francisco Mayor Ed Lee said. “People want to be here.” On Monday, Lee led journalists on a tour of Central Market, pausing in front of businesses newly moved in, or under construction. He pointed out that office vacancy rates in the area have fallen to 8.5 percent, a 60 percent drop since 2011. “We are now seeing 5,500 housing units being built,” Lee said, strolling the street with a couple dozen people in tow.

This story is part of a special report on workforce development in San Francisco.