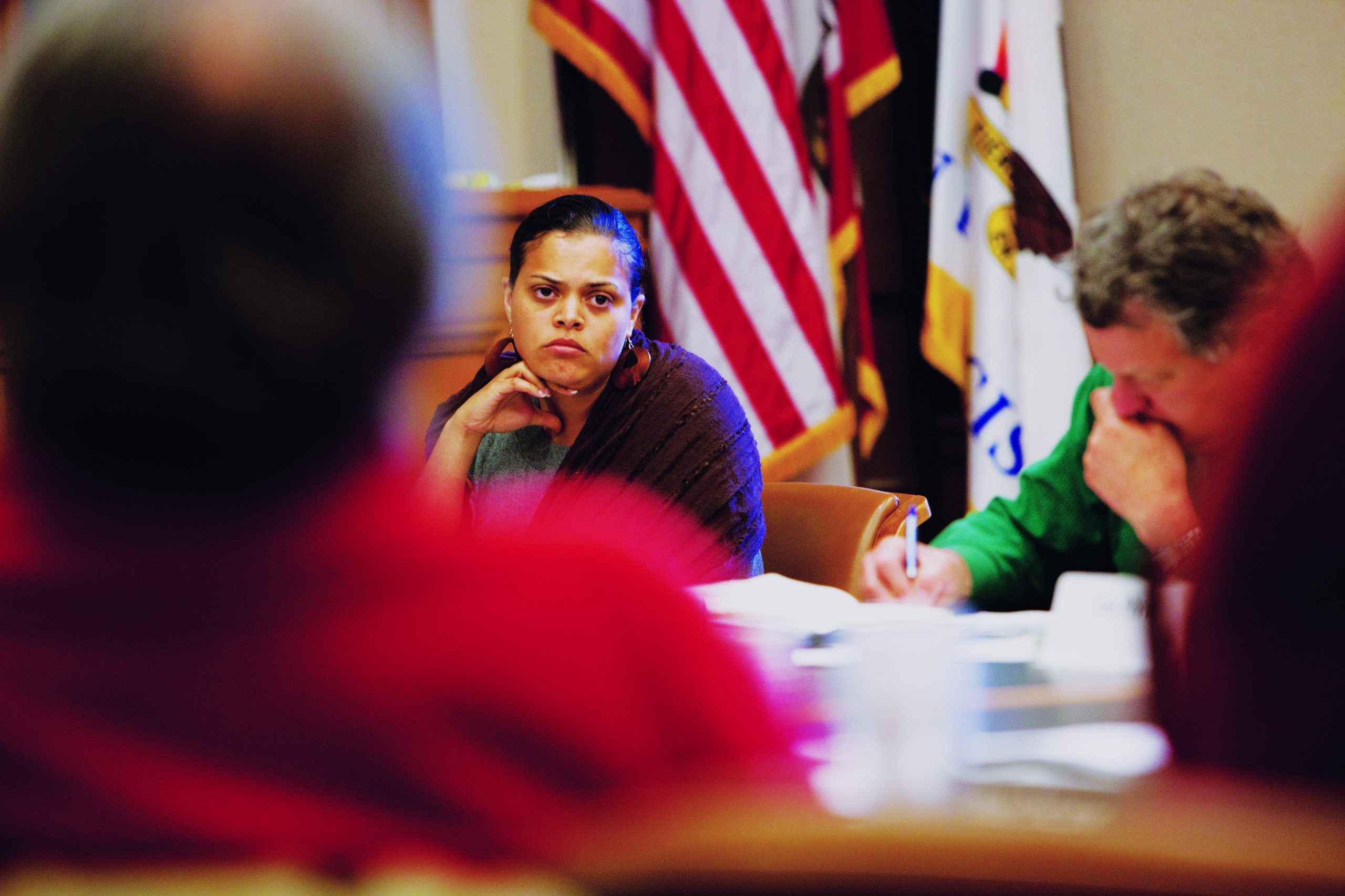 Laura Shipman is a member of the Community Advisory Board for the Treasure Island project and an advocate for the formerly homeless and low-income residents. Photo by Monica Jensen/SF Public Press.

Residents of Yerba Buena and Treasure islands are divided on the relocation plan city officials have presented to the public. While many Yerba Buena residents expressed concern over maintaining their quality of life through more than a decade of construction, Treasure Island residents tended to express more support.

Joanna Luddington lives on Treasure Island. She endorsed the redevelopment and the relocation plan after a community meeting sponsored by the Treasure Island Development Authority Thursday.

“I’m looking forward to it,” Luddington said. “I’m not too worried.”

But Nate Yeakel, an eight-year resident of Yerba Buena Island, had questions about the phasing of the construction, and suspected that it might get bogged down, making the relocation of residents premature.

“We’ve really developed a sense of community,” Yeakel said. “I find it a little sad that that community is going to be dispersed.

We’re being forced to move without a lot of transparency and due process.” The process of relocating the residents has reached its early stages. The authority has begun to inform residents of about 1,000 households about their relocation options and transition benefits.

Residents making both interim and longterm moves are eligible for moving assistance funds from the Treasure Island authority. Residents whom the redevelopment forces to make long-term moves can choose one of three housing benefits options. The rental housing option would allow residents to lease one of the new units in the Treasure Island redevelopment project at a subsidized rate, and rent-control protections. The unit purchase assistance option would give residents down-payment assistance for one of the redevelopment’s new units.

Residents’ third option would entail an in-lieu payment, requiring them to move off the island. City officials estimated the in-lieu payment at $5,101 per adult tenant with an additional $3,401 payment for residents over the age of 60, with disabilities or with one or more minor children.

The total cost for the relocation benefits program depends entirely on how many tenants remain residents on the island over the next eight years, and which benefits options residents end up choosing, Sylvan said. He said he was unable to provide even a rough estimate for the comprehensive relocation budget.

Sylvan noted that all of the Treasure and Yerba Buena Island households have been aware since the beginning of their residency that relocation for development projects was highly likely. “Everyone has known since the day they moved onto the island that a redevelopment project was happening,” Sylvan said.

Some residents at the Thursday meeting expressed concern about what the new housing units and residential area would look like. Sylvan said the authority cannot provide more detailed descriptions of the new structures until the project is officially approved.

“We can tell people what the overall look and feel of the buildings will be, but we don’t know,” Sylvan said. “The truth is, six years from now, we can’t project exactly what that building is going to look like. Folks are looking for information and they’re looking for certainty, and it’s hard to provide certainty right now.”

Katy is an executive editor for the student newspaper at Williams College, where she is a double English and History major.