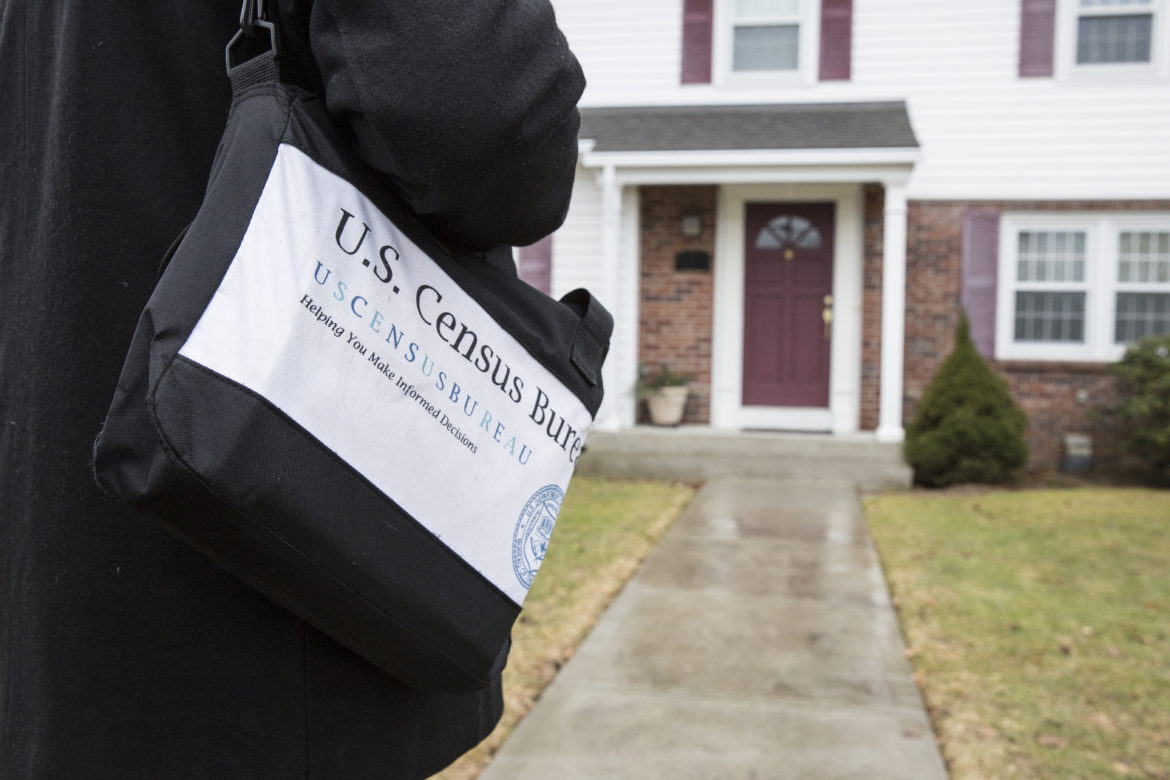 President Trump has issued a directive that would erode the wall between the U.S. Census and the executive branch. In a July memo, Trump instructed the Census Bureau to exclude undocumented immigrants from the census numbers used to apportion representatives. The census is a constitutionally-mandated tally that is supposed to include every resident of the United States. At a recent congressional hearing, Census Bureau Director Steven Dillingham evaded questions about the memo and whether and how it would, or could, be implemented. Several states filed lawsuits against the directive, and judges could issue a ruling blocking its implementation by the end of August. The possibility that the memo might be put into action plays into deep fears in vulnerable communities, like those with many undocumented residents as well as homeless people, people with disabilities and low-income seniors.

The count from the census is used to determine how many seats each state gets in the U.S. House of Representatives. And according to the Project on Government Oversight, California can also expect to receive more than $170 billion in census-guided federal funding over the next ten years, and this funding is distributed based on the population tallied by the census. But past encounters with well-meaning government agents have made homeless, poor, undocumented and otherwise marginalized people skeptical that being counted will benefit them, said Lisa “Tiny” Gray-Garcia, an Oakland-based advocate, self-described “poverty scholar” and co-founder of POOR Magazine.

Gray-Garcia and her mother became homeless when she was 11.

“I had to drop out of school and enter the school of hard knocks, where I’m proud to say I graduated with a Ph.D. in poverty,” Gray-Garcia said. “But you know, not glamorizing that at all. We were constantly criminalized.”

When a social worker saw Gray-Garcia and her mother living on the street, she said, she was separated from her mother and placed in foster care. Her mother was deemed unfit and had to fight to get Gray-Garcia back. She said she knows other homeless parents who fear contact with any government agent could mean the same might happen to their families, or simply bring unwanted attention from other government agencies.

“You’ve got indigenous refugees, migrante folks who cross these false borders and are now here working for, you know, barely a living wage, who can’t afford rent. It doesn’t help to count Indigenous, and, you know, refugees. It doesn’t help to count children,” Gray-Garcia said. “Because if families are seen on the street, we get incarcerated more. You know, families are immediately criminalized when we’re seen on the street. That’s what me and Mama’s situation was.”

Sonny Le, a partnership specialist for the San Francisco Bay Area with the Census Bureau, responded to that concern by emphasizing that the personal information collected by the census is not shared with other branches of government.

“Nobody has access to the Census Bureau,” he said in early March. “Not law enforcement agencies, not the planning department, not CPS,” a reference to Child Protective Services.

Mobilizing to count everyone

The census is frequently referred to as the country’s largest peacetime mobilization, sending enumerators out in massive numbers to try to ensure everyone is reached and counted. About 63% of the population has filled out the census online and as a result of early outreach efforts.

Households that did not respond to the census online have other options, including responding by phone or mailing a paper form. Failing that, enumerators will visit. But the schedule for in-person counting has been repeatedly delayed by the coronavirus pandemic. Census takers have just this week begun knocking on the doors of 56 million households nationwide. And concerns raised at the beginning of this year are starting to come into sharper focus now.

In addition to uncertainty about the inclusion of undocumented residents, there is uncertainty about how and when people who don’t have a fixed address will be counted. The dates for enumerators to reach out to people living in congregate settings or in informal gathering places like under bridges and in encampments have been moved to September, and all counting operations are slated to conclude by the end of that month. For homeless people, Gray-Garcia said, the only thing that would make being counted feel safe would be anonymity.

“I haven’t seen the fact that my information will be protected. And if you’re talking about making people feel safe to engage in a count in a time like this, when we have this federal government administration — let me not go into that rabbit hole — you need to make that really front and center,” Gray-Garcia said. “Because there’s absolutely no way I know that me and fellow poor mamas on the street who I work with and live with every day would engage with any kind of counting like that right now.”

Anonymity is not something the Census Bureau can promise. The census asks every person for their name, address and age. However, personally identifiable information, said Le with the Census Bureau, is not released to the public until 72 years after it’s collected.

At the time of Le’s remarks, the presidential memo ordering the exclusion of undocumented immigrants hadn’t been issued. But when pressed on what would happen if the executive branch decided to exert pressure on the Census Bureau, Le expressed confidence the agency’s data would remain secure and private.

“You have to consider that it requires both houses of Congress for that law to pass, or to be changed,” he said. “And it cannot be changed through executive order.”

He described the agency as a steward of information rather than a broker. “Census data is free, because the taxpayers pay for it. And because it belongs to the public, not us,” he said. “The Census Bureau is only responsible for collecting and safekeeping the data. It’s not our data.”

Distrust in an imperfectly inclusive system

Even for people who don’t have immediate fears of being targeted, there is still a base level of trust that those who are supposed to get counted need to have in order to be convinced to participate in the census. Jessica Lehman, who directs the San Francisco advocacy group Senior and Disability Action, said that’s a hard sell for many seniors and people with disabilities — who are also overrepresented among the homeless. Past negative experiences with agencies that promise to help, she said, make it difficult for someone who is struggling with daily tasks like finding shelter or food to go to the effort of completing the census.

“I always worry, too, just the tremendous ableism and ageism in our society makes people think that, or really is the idea that, disabled people and seniors just don’t matter,” she said. “So I don’t think it’s at the top of everyone’s mind that we have to make sure that seniors and disabled people get counted. Even though frankly, we rely on a lot of the programs that we’re talking about and we’re an incredibly important part of our society. But if people don’t have that in their heads that we need to be reached, we need to be counted, we need access, then it’s going to be easy to kind of ignore us.”

The onus to find and count those who have been left out is on the Census Bureau and its enumerators.

“It’s often hard to reach isolated seniors and isolated people with disabilities,” Lehman said. “It’s just a question of: Do the agencies and organizations that are doing census outreach know how to reach, particularly, disabled people? And so, will that happen to the extent it needs to?”

Scott Blanks, senior program director at San Francisco’s Lighthouse for the Blind and Visually Impaired, saw the online count as an opportunity for improved independence.

“The census being online is exciting because it does present the possibility that someone who has requisite access technology like screen magnification or a screen reader to complete the survey independently,” Blanks said. “If it’s an accessible experience, a number of blind and visually impaired folks will have an autonomous independent experience for the first time with the census.”

The online census, Le said, meets federal standards for accessibility to people with disabilities. Software compatibility alone will not determine how well people with disabilities are included, however. The counting process began in mid-March with a printed invitation mailed to every household, inviting members to fill out the census online. As Blanks pointed out, people who are not able to read print independently must rely on someone else to interpret that invitation. If they don’t do that, at some point an enumerator is supposed to come knocking.

In the past, “Someone coming to your home to fill out the census was the norm,” said Blanks. “That experience was one in which a blind person could participate. Though again, sitting with somebody who might be completing a document on your behalf is not necessarily an independent experience,” he said. “And you don’t know if the information that you’re providing is being entered in an accurate fashion.”

It’s another example of why people with disabilities, people of color and immigrants ought to be engaged in designing public policies and practices, Lehman said.

“We need people to be designing our programs and our systems and not just trying to make sense of them afterwards, because it’s hard to catch all of these things after they’re out,” she said.

This is the first story and episode in a series of reports on the impacts of the digital divide on getting a complete count in the 2020 Census. This series is made possible by funding from Renaissance Journalism.