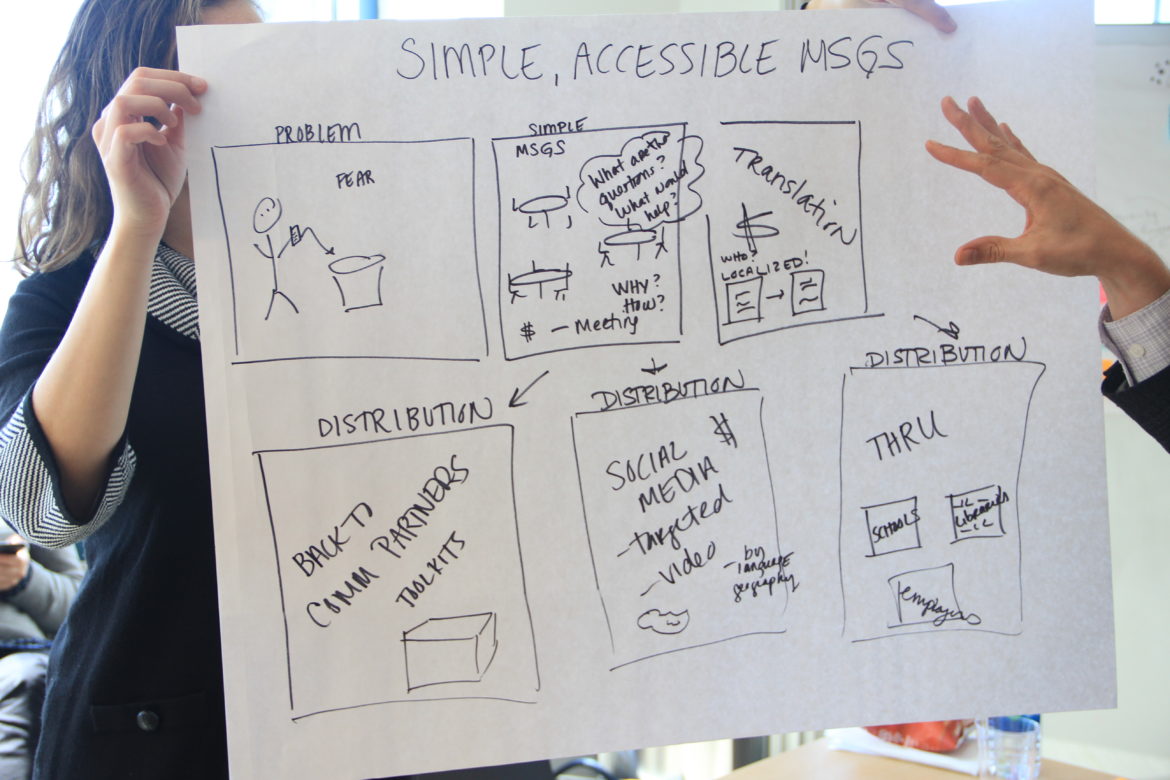 A census solutions workshop hosted in Seattle in 2018 by King County and Seattle Foundation.

The 2020 census is well under way, but a timetable muddled by the coronavirus pandemic coupled with attempts by President Trump to make disruptive changes have set the stage for the spread of misinformation that threatens a complete count.

Local nonprofit organizations have been working to get correct and timely information to people often labeled “hard to count” to avoid that outcome. California has invested heavily in efforts to raise awareness of the census and disseminate current and correct information about it, often through partnerships with community-based organizations.

The stakes are high: The census determines the allocation of $170 billion in federal funds for the state over the next decade, which funds services like MediCal as well as nutrition and housing assistance. Incorrect counts of the populations that benefit from those programs could paint an inaccurate picture of the need. And even with a complete count, California is expected to lose a congressional seat after this census.

“There’s a tremendous danger that the people who will not be counted are the people who are most in need of being counted in terms of needed services,” said Laurie Sanchez, who works at the digital access nonprofit Community Tech Network. “So, then we create a false picture of what our residents of the country are. And then we reinforce stereotypes of not needing to feed people, not needing to provide housing, all of these things.”

“You exclude all the problems from the count, and then you can say there are no problems,” she added.

The less knowledgeable people are, Sanchez said, the more susceptible they are to being misinformed. “So, this, again, becomes the education campaign.”

News about the census changes by the day or even by the hour, and someone who isn’t online much may fall out of the loop. Simply keeping up with the flood of information requires a number of skills: English proficiency, access to technology, and an education that includes critical analysis of the news, Sanchez said.

This is why community-based groups have been working to disseminate accurate information, acting as what the Census Bureau calls “trusted messengers.” Among them is Self-Help for the Elderly, a nonprofit that works primarily in Asian communities in San Francisco. While much of their efforts earlier this year concentrated on in-person assistance, Self-Help for the Elderly’s Emma Yicheng Wu said outreach efforts also included social media and messenger applications.

Self-Help for the Elderly has an officially verified WeChat account it uses to push out information about the census to an audience of all ages.

“I will say that all Chinese, even including some that are born here, they will start using the WeChat app since it’s so functional and accessible,” Wu said. Users ages range, in her estimation, from “maybe like in their elementary school or middle school up to like a very, you know, 80-, 90-, 100-year-old seniors, reach out every single day. They use it to chat with their families. They publish their story of the day with their friends.”

WeChat, with 1 billion Chinese speaking users worldwide, is owned by a Chinese company and monitored by the Chinese government. For groups hoping to disseminate accurate information and battle misinformation, that institutional control is a big hurdle, said Hong Mei Pang, director of advocacy at Chinese for Affirmative Action, a nonprofit group in San Francisco.

“The most credible accounts are the ones that are official, but also that there are very strong regulations from the Chinese government that aim to censor issues that revolved around human rights,” Pang said. “The software catches phrases. They’re bots that the government sends out to capture phrases and deactivate accounts that might be misaligned with state propaganda.”

That meant extra hurdles for organizations trying to use the platform to communicate with immigrant communities in the United States, like Chinese for Affirmative Action has for years.

“This has been a barrier to be able to institutionalize and get that credibility in our community through social media, because it has been gatekept transnationally,” Pang said. In January 2019, Chinese for Affirmative Action was able to get an official WeChat account, and is now able to facilitate information sharing through private WeChat groups.

Adding to the confusion, Trump this month threatened to ban WeChat in the United States. It’s unclear if and how such a ban will be implemented. For now, Chinese for Affirmative Action continues to answer questions on its WeChat account.

On other social media platforms, too, misinformation or incorrect information can circulate. In March, Facebook announced it would delete hundreds of ads from the official Trump re-election campaign that prodded viewers to click a link to a campaign survey by suggesting the ads led to an “official census.” On Twitter, a hashtag briefly circulated last year encouraging a boycott of the census. A national spokesperson for the Census Bureau confirmed receipt of questions about partnerships with social media companies but ultimately did not provide responses.

What users end up with is a maelstrom of content, said Pang at Chinese for Affirmative Action.

“We are being oversaturated with different brands, differently branded information, different kinds of factsheets and all of this stuff that is floating out there in census universe,” Pang said. “It’s better to reach somebody three times than to not reach them at all, because we know that the census is important. But what ends up happening is that, you know, directly impacted hard-to-count communities have to sift through all of that.”

By early March, fears still lingered that the census might include, at the behest of Trump, a question about citizenship. The Supreme Court decided in late June 2019 that the Census should have no such question. But the possibility had made people nervous, and community groups were still working to address immigrants’ fears.

“It does feel like we are in this kind of narrative space where we’re being constantly bombarded with information,” said Pang. “So we have to kind of cut through the fear and really reiterate that this is about being, you know, a resident In a democratic society, and in a democracy, we have rights. And part of that right is to be able to be seen be heard, and be visible and to matter.”

“Part of what makes it even scarier is that all of this is shrouded in mystery, where people don’t really understand what census is,” she added.

In late July, Trump sent a memo to the Census Bureau saying he wants undocumented immigrants not to be considered in the count that will determine how congressional representatives are divided among states. In testimony before Congress July 29, the Bureau’s director, Steven Dillingham, did not give a definitive answer as to whether or not his office would, or even could, carry out that directive. Lawsuits by several states challenging the directive could result in a ruling by the end of this month.

In early March, Sonny Le, a partnership specialist for the Census Bureau working in the Bay Area, said the personal information collected by the census is not shared with other branches of government. As a Vietnamese immigrant himself, he said, he understands that the prospect of the government coming knocking is seen as threatening in some immigrant communities.

“In those countries, if the government comes to you, that’s not a good thing. You want the government to have very little on us,” Le said. “But we keep reminding people what we do with the census data in America. And, at the Census Bureau, it’s not our data. It’s your data. We produce that data for you.”

It would take legislative action to change the protections on census data, he said.

“You have to consider that it requires both houses of Congress for that law to pass, or to be changed,” he added. “And it cannot be changed through executive order.”

More than half a million enumerators are being deployed this week to reach the roughly 56 million households nationwide that have yet to complete the census. But the Census Bureau is scheduled to conclude its count at the end of September. Those who are most likely to be left out if counting ends before enumerators can reach everyone are renters, people of color, immigrants and people who live in rural areas. As of mid-August, just 61% of San Franciscans have been counted.

This is the last in a three-part series of multimedia reports on the impacts of the digital divide on the 2020 Census. Read or listen to the first part here and the second part here. This project was made possible by funding from Renaissance Journalism.