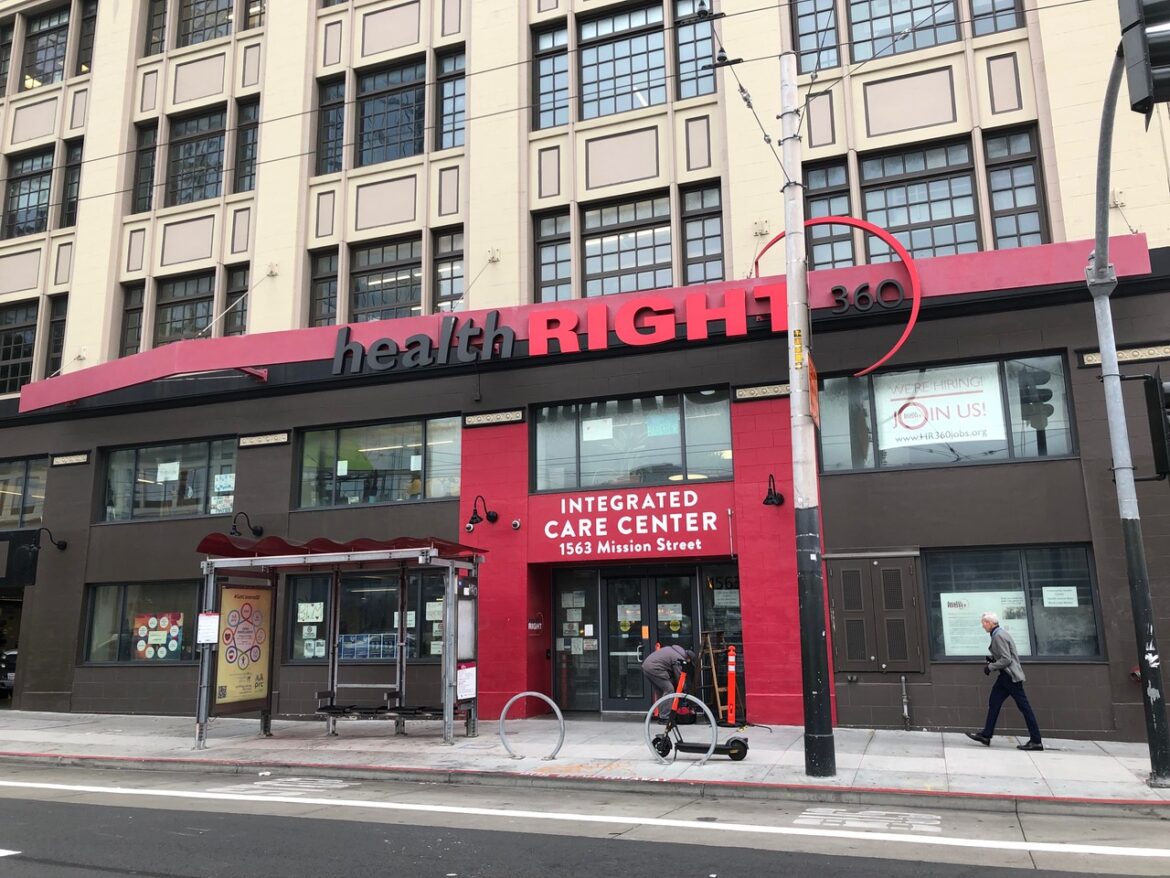 Overdoses in San Francisco spiked in 2020. HealthRIGHT 360 is one of many organizations in the city that provide substance use disorder treatment services.

This article is adapted from an episode of our podcast “Civic.” It is the first in a two-part series examining factors contributing to recent increases in drug overdoses in San Francisco and ways to mitigate the problem. Click the audio player below to hear the full story.

These figures are troubling, even without counting nonfatal overdoses and other suffering associated with this crisis. While fentanyl is often cited for the rapid increase, many factors contribute to this trend both in San Francisco and nationally.

Dr. Hillary Kunins, director of behavioral health for San Francisco, said the trend that culminated in the 2020 spike in overdose deaths began two years earlier. Although numbers have declined since then, they have remained higher than in previous years.

Until recently, communities struggled to address overdoses effectively, Kunins said. Social stigma contributes to misunderstandings about the disease of addiction, and what might lead a person to develop such a condition.

“What has happened in the last few years across the country, including in San Francisco,” she said, “is a willingness to expand the approaches that we know to be effective scientifically, try new and innovative approaches that have the potential to be effective, and continuing to invest in and really ask all of us — community members, health professionals, government — to take every step we can to change the trajectory of this epidemic.

“What we are increasingly, I think, facing, both here in San Francisco and nationally, is the extent to which addiction and substance use really has underpinnings around a lot of what we call social determinants of health, particularly around income inequality, inaccessible access to living wages, discrimination — racial and otherwise — resulting trauma from racism, from other kinds of life experiences.”

Dr. Dan Ciccarrone, a clinician and a professor at the department of family and community medicine at the University of San Francisco, California, Medical Center, who researches the public health aspects of drug use, described the 20-year trend of opioid overdoses as a triple-wave epidemic, with a new fourth wave emerging in 2021.

“The first wave are overdoses due to opioid pills — that peaked around 2010,” Ciccarrone said. “And as we became aware of that wave, we started a number of programs — for example, prescription drug monitoring programs, guidelines on prescribing opioid pills. That brought that wave to come down slightly.”

But increased opioid pill use was complicated by an overlapping increase in the street use of heroin, he said, “where people, often patients, migrated from medical care with opiate prescriptions to street-based pills and heroin. And that led to ‘wave two,’ which was a heroin overdose wave. It started picking up steam around 2011 peaked around 2014.”

This was followed by “a very unfortunate and very deadly wave where heroin became adulterated, contaminated with, poisoned with synthetic opioids such as fentanyl. That wave is still with us,” he said. “It’s still growing.”

About 70,000 Americans have died from synthetic opioids, including fentanyl, in the last 12 months, Ciccarrone said.

He said the fourth wave of the overdose epidemic is driven by stimulants, which include cocaine and methamphetamine: “People are using them both independently, but also in combination with heroin and fentanyl.”

Fentanyl is a synthetic opioid that is powerful and fast acting, and is regularly used in medical settings during surgery, in anesthesia and during childbirth, Ciccarrone said.

“We like it because it’s potent,” he said, “so, you can take someone who’s in severe pain out of severe pain.”

“Imagine that you’re in the childbirth setting where you use this powerful opioid,” he said. “You want it to wear off quickly — so you have control over it, and the mom and the baby can be kept safe.”

But fentanyl used on the streets is manufactured illegally with unknown levels of purity and potency. Most of it is produced in China, with some arriving directly and some coming across the border from Mexico and Canada.

The overdose crisis is complicated by people taking multiple drugs — sometimes unknowingly — that interact in powerful and surprising ways. In mid-March, San Francisco’s health department sent out a press release noting that three people had suffered a fatal fentanyl overdose (and nine people suffered nonfatal fentanyl overdoses) who reportedly had intended to only use cocaine.

Tracey Helton Mitchell, author of several books including “The Big Fix: Hope After Heroin,” is an addiction specialist and a person in recovery. She said the physical response to an overdose can vary depending on the drugs involved.

“There’s lots of different types of overdoses,” Mitchell said. “And also, what we see a lot in San Francisco is people using multiple substances at the same time.”

“Even if people are buying fentanyl, which is the main driver of overdose right now, they don’t know necessarily what the potency is,” Mitchell said. “So, there are people who are buying cocaine that’s somehow been cross contaminated with fentanyl. And then they are having an accidental overdose.”

Some organizations that work to prevent overdoses specifically use language that does not pin this overdose crisis on opioids alone.

“Opioids are an incredibly useful and crucial, essential medicine,” said Eliza Wheeler, director of the Remedy Alliance for the People, which works to ensure that harm-reduction programs across the country have access to the overdose-reversal drug Naloxone. “And there’s been a lot of objection to the term ‘opioid crisis’ among harm reductionists and folks working on drug policy work, and really wanting to shift the focus to ‘overdose crisis’ and ‘supply crisis,’ and kind of thinking about the way in which drug policy and prohibition have in fact created the overdose crisis, not the drug opioid itself.”

Wheeler said COVID-19 exacerbated preexisting conditions that contribute to overdose risk, citing “wealth inequality, folks being unhoused, having lack of access to resources, the impact of law enforcement and city crackdowns on folks who are unhoused, separating groups that were taking care of one another. People being isolated.”

“You see the huge spike right around the time that the pandemic began,” she said. “And the drug itself, fentanyl has not necessarily changed since 2015. But the conditions under which people are using have changed.”

Some overdoses in San Francisco happen on public streets, and so there is a tendency to conflate homelessness and drug use.

Laura Guzman, senior director of capacity building and community mobilization for the National Harm Reduction Coalition, said about one-third of people who become homeless have been affected by drug use.

“We know that there is a subset of people who, due to what we call chaotic drug use, may have become homeless,” she said. “But the majority of people who have gotten chaotic relationships or coping relationships with drugs have been as a result of their homelessness.”

Guzman also noted that people who have experienced homelessness often have trouble getting into housing again on their own. She also said that as in so many other areas, COVID-19 really intensified existing disparities.

“What we’re seeing is that, right now, as we talk generally about an opioid crisis, this particular moment, the disproportionate impact is on people who have been already impacted by health disparities, by the lack of health access culturally, linguistically competent, by the lack access to both actually mental health and substance use treatment,” she said.

“Those things kind of get combined. And COVID was really pivotal to see how those numbers continue to be increased. So, in San Francisco, the ratio of overdose-related death is 6-to-1 on Black folks over white folks, even though they’re, what, 5% of the population of San Francisco.”

This combination of problems is particularly visible in the Tenderloin, which has a reputation. Elgin Rose lives and works there — he’s director of outreach for Code Tenderloin — and saw some of the COVID-19 safety measures backfire a bit. Joel Yates is a case manager at Code Tenderloin. Both are in recovery, and neither is surprised that the Tenderloin is seeing such a huge number of overdoses.

Rose said the pandemic brought some attention to the neighborhood and got some people who were living on the streets into temporary housing. But with the focus on COVID-19, many underlying issues were not addressed.

“They put folks in hotels and all these things, you know, these cosmetic fixes, in the name of COVID, but didn’t dare touch the person or address what was going on with that person individually,” Rose said. “So, I would say that COVID, I think, almost was a bigger distraction for the core problems in the neighborhood.”

He said he sees people suffering on the streets in front of the buildings where he lives and works.

“We do want to scream to the top of the heavens that this place needs some support. That the overdoses shouldn’t be at the level that they are on, and just, the drug flow shouldn’t be here,” he said. “And so, until it’s actually responded to as an emergency, the people are gonna just be constantly be in trouble. So, bring the help.”

“I put it simply: It’s just a lot of people dying slowly,” Yates said, adding that he had never seen a situation like this before he moved to the Tenderloin. “Then, the victims of it were my friends. They’re just people in a neighborhood who I could see fall apart over the years. When you, like say, put a face to it, you don’t forget it. If you don’t believe the news, just come see it.”

Use the player at the top of this story to listen to the full episode for an extended conversation on these topics and others related to overdoses, including why people who lack housing might use drugs, how social isolation during the pandemic may have contributed to the increase in overdoses, and myths linking homelessness and fatal drug overdoses.

We will continue this discussion in an upcoming “Civic” episode examining what measures have been taken to address increasing overdoses, how people who use drugs are reversing overdoses themselves, other harm reduction efforts, what treatment and recovery can mean and how activists, volunteers and the city are trying to help people find their way there. (Part II: “Harm Reduction Critical to Addressing Overdose Crisis, Local Experts Say”)