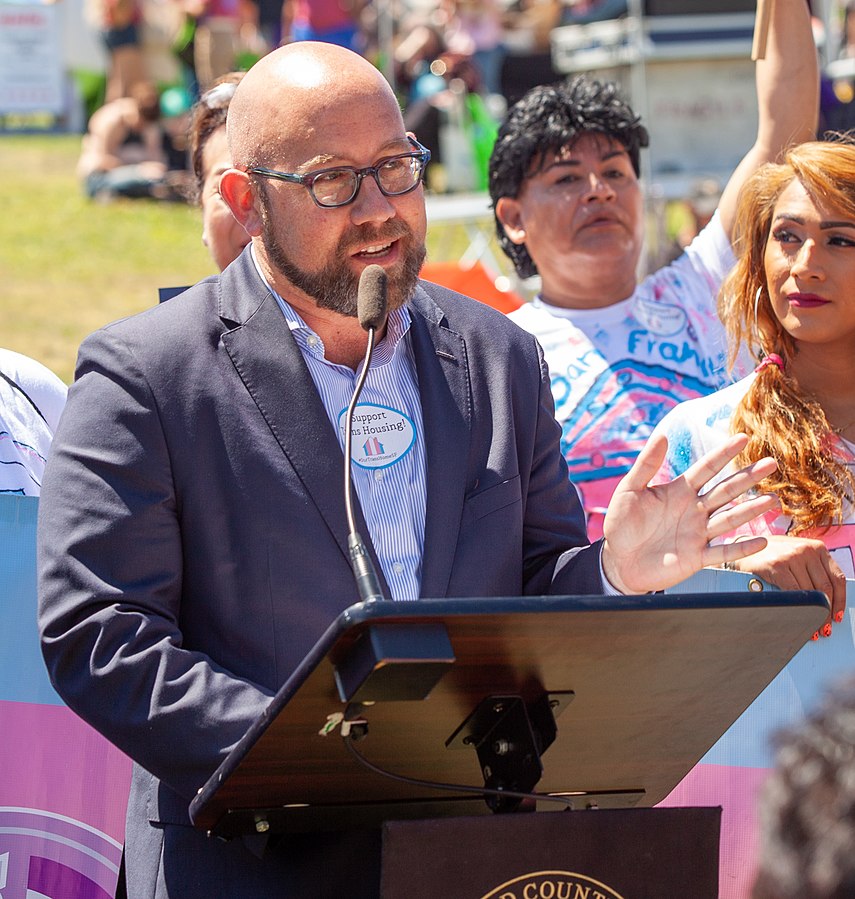 District 8 Supervisor Rafael Mandelman plans to introduce a resolution asking the Board of Supervisors to support sanctioned homeless encampments, to prevent the spread of COVID-19 among unhoused residents. Pax Ahimsa Gethen / Wikimedia Commons

One San Francisco Supervisor is pushing the city to designate up to five public sites for sanctioned homeless encampments in an effort to protect unhoused residents from COVID-19.

Rafael Mandelman, who represents the Castro, Noe Valley and Glen Park, said he will introduce a legislative resolution today urging the city to begin establishing the sites, which would include toilets and handwashing stations. They would also be laid out to allow sufficient space for homeless residents to follow social-distancing health guidelines. Mandelman has said Everett Middle School would be suitable for a sanctioned encampment, and other potential sites include Kezar Stadium and the Department of Motor Vehicles. The concept has backing from at least one neighborhood group in Mandelman’s district.

“There’s a public-health imperative. Housed people are going to extraordinary lengths to limit their social contact with other people,” Mandelman said. “But unhoused folks just generally do not have the opportunity to social distance.”

Government-managed encampments would make that possible for the many homeless people who would be unable to obtain hotel rooms through the city’s latest initiative. The Board of Supervisors last week voted unanimously to acquire 8,250 hotel rooms by April 26, 7,000 of which would be for homeless people. The city’s most recent point-in-time count, conducted in 2019, tallied more than 8,000 homeless people. The National Law Center on Homelessness and Poverty has called this and similar one-day counts “severely flawed” and said they likely underestimate the total homeless population because, for example, surveyors will miss the people who intentionally reside in hidden places to avoid attention from police.

Sanctioned encampments were once unthinkable in San Francisco. In 2017, Jeff Kositsky, then-director of the city’s Department of Homelessness and Supportive Housing, went so far as to say that some self-managed camps in Portland, Ore., and Seattle had “failed miserably.” Kositsky now manages the Healthy Streets Operation Center, a multi-department response to street homelessness.

But the coronavirus pandemic has changed everything. Kositsky this month told the San Francisco Examiner that the option was on the table.

Other cities have made similar about-faces on camps, suddenly warming to the concept to help homeless people socially distance. This month in Los Angeles, the U.S. Department of Veterans Affairs set up an encampment for 25 veterans — though department staff denied that it was a campground, calling it a “services center” instead. Officials in Portland, Ore., are opening three sites with 45 tents each. One site will prioritize LGBTQ people, another will prioritize people of color and the third site will be open to all with an emphasis on older occupants.

Mandelman said he has been working in the political background for weeks, laying the groundwork for this policy approach by speaking frequently with Kositsky and other city officials about its feasibility.

“I have been having a set of increasingly hopeful conversations with the people who have to actually do the administrative and logistical work that would make this happen,” he said.

Mandelman called the site of Everett Middle School, in the Mission, near the Castro, a “natural” initial location for a sanctioned encampment. Its large parking lot — now empty, because the San Francisco Unified School District has closed campuses for the rest of the school year — would make it easy to set up many tents with at least six feet of distance between them. Nearby residents have told Mandelman that they support the idea, he said, in large part because homeless people are already congregating in the area.

Carolyn Kenady, chair of the Dolores Heights Improvement Club, said she supports the idea, while the eight-member board supports “alternatives to people sleeping on our sidewalks.” She has been involved in discussions with Mandelman’s office about sanctioned encampments.

“The city’s de facto policy has been — and maybe it’ll change with the pandemic — OK residents, you’re going to house the people on your sidewalks,” Kenady said. “And that’s something that everybody in the city is frustrated about.” Everett Middle School might be a microcosmic example of this, Kenady said. It is already home to tent dwellers, and Mandelman’s proposal would merely regulate the environment.

“What I’d want to see is toilets, showers, meals and some services in there, just some basic services to help people,” she said. “It’s not going to be easy, but that’s better than what I see in my neighborhood, which is literally one tent up against the next tent, up against the next.”

Mandelman isn’t the only supervisor to express interest in the approach. Dean Preston, who represents the Haight and Western Addition, said that by today he would endorse a location for a sanctioned encampment.

Making Kezar an encampment site would save the city money because it has bathrooms and showers, negating the need to set up temporary handwashing stations, said Kelley Cutler, human rights organizer at the Coalition on Homelessness.

“Ideally, it’d be good to have different sites spread around the city, just where people are,” Cutler said. There are prevalent homeless populations in the Haight, Mission District, Bayview, Tenderloin and South of Market, she added.

In a Coalition on Homelessness policy paper, the organization has prescribed the essentials for a homeless encampment based on examples in other cities. Camping areas should include bathrooms and showers; access to drinking water; weekly garbage, recycling and compost service; and cooking facilities.

Mandelman said the sites would need to have bathrooms — “that’s top of the list.” Ideally, they would also provide showers and meals, as well as electricity and internet connectivity “to keep people from having to go look around for entertainment.” But he said quickly getting the sites operational was more important than securing all desired amenities.

The Board of Supervisors is expected to vote on the resolution next week, Mandelman said. If it passes, he would like to see the city bring online an initial two to five sanctioned encampments in May.

When the shelter-in-place order is lifted, Mandelman said he would be interested in transitioning residents of the sanctioned encampments to different sites, rather than disbanding them.

“When the school needs the property back — presumably it starts again in the fall — how are we going to arrange an orderly transition, so there’s a place for them to go, that is not just the sidewalks?” Mandelman said. “That’s important to me, and important to the neighbors, I think.”

CORRECTION: This article has been updated to show that the board of the Dolores Heights Improvement Club supported alternatives to sleeping on sidewalks, not sanctioned encampments.