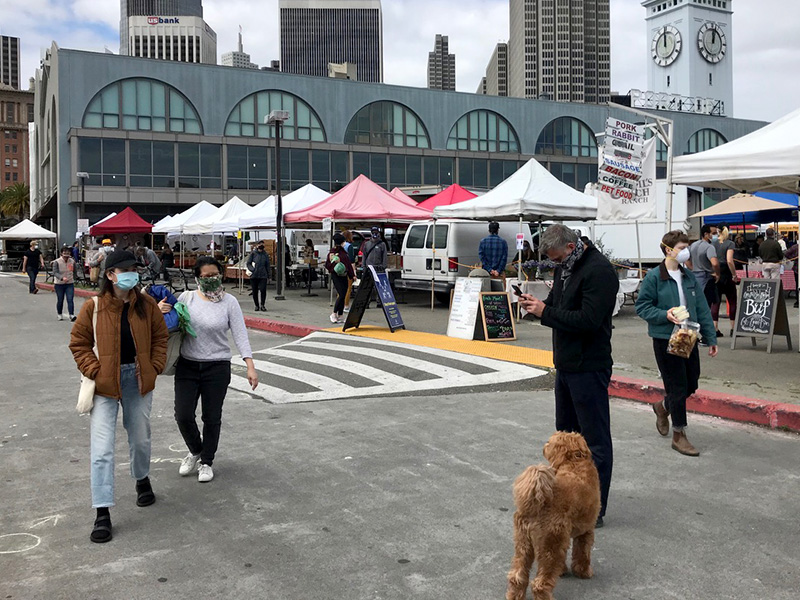 Farmers markets are able to reconfigure stalls and have the advantage of often being open-air, but they are also adapting to social distancing health orders by increasing access to fresh produce for low-income customers. Shoppers who use CalFresh, the state’s food assistance program, have been receiving additional assistance at some farmers markets during April — markets generally match up to $10 worth of CalFresh benefits with tokens for produce, but some have been doubling that figure for the month.

“I’ve definitely seen an increase in usage of EBT and also people who are new to the system and who are new to learning that farmers markets are also a place for them to utilize their benefits,” said Christine Farren, executive director of the Center for Urban Education about Sustainable Agriculture, which runs some San Francisco farmers markets.

Markets across the nation are reshaping their layouts and changing shopping procedures, while farmers, vendors and advocacy groups grapple with decreased foot traffic and at times inconsistent government guidance. Some states and cities have issued conflicting directives as to whether markets may remain open.

“I think that that’s one of the things that the markets are really suffering from is that they can’t necessarily breathe a sigh of relief when they hear that, you know, their city or their state is deeming them an essential service,” said Kelly Verel, senior director of programs and projects at the New York nonprofit Project for Public Spaces. “Markets are really key destinations in our neighborhoods. And we love that, we want that. But they are serving other benefits that are super important, especially right now, like public health, food access, local agriculture, small business entrepreneurship.”