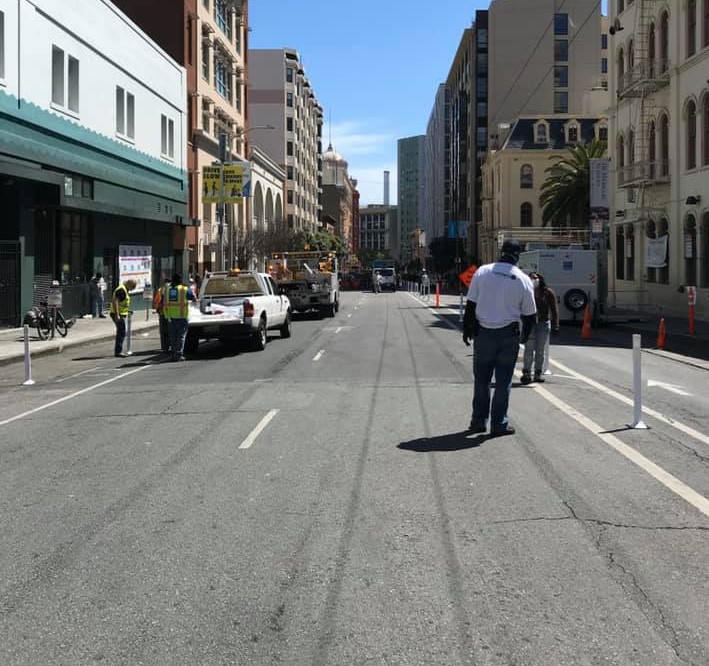 City agencies agreed to close the 100 block of Golden Gate Avenue after repeated requests from community members and Supervisor Matt Haney, who represents the Tenderloin. Courtesy of St. Anthony Foundation

Noah Arroyo, Assistant Editor |
LikeTweet EmailPrint More
San Francisco is closing several streets as part of an extension of the stay-home order, in a move that addresses some criticism of a street-closure plan announced last week.

This is in addition to the multiple street closures that the San Francisco Municipal Transportation Agency’s Slow Streets Program will implement in coming weeks. The program drew fire from city supervisors who found the street selections inadequate or confusing.

“That’s a great start, but it’s not enough,” said District 6 Supervisor Matt Haney on April 21 in response to the program’s announcement. “We need to make an expansion of the space that people have in the Tenderloin.”

Haney and neighborhood organizations had been pushing the city for weeks to close the 100 block of Golden Gate Avenue to enable social distancing for the throngs of people standing in line every day for take-out meals from area soup kitchens.

“We need more space,” St. Anthony Foundation Executive Director José Ramirez told the Public Press. At the time, he said there was “not adequate social distancing” because clients were crammed into sidewalk space alongside pedestrians, tent dwellers and occasional bicyclists.

On April 23, city agencies finally complied. The street is now closed to through traffic from 6 a.m. to 3 p.m., with exceptions for emergency vehicles, bicycles and vehicles delivering clothing donations.

Organizations along Golden Gate Avenue, between Jones and Leavenworth streets, have seen elevated demand for prepared meals, produce, hygiene kits, clothing and other services since Breed issued a mid-March order to close nonessential businesses and require residents to shelter in place.

The St. Anthony Foundation, which operates on that block, has experienced about a 50% surge in demand for meals since the crisis hit. It now consistently serves about 3,000 free meals daily, up from about 2,000 prior to the order. The organization has also paid out of pocket to provide handwashing stations to clients and personal protective equipment for staff.

That elevated demand is likely to be the new normal for many weeks to come, now that Breed has extended the shelter-in-place order through May.