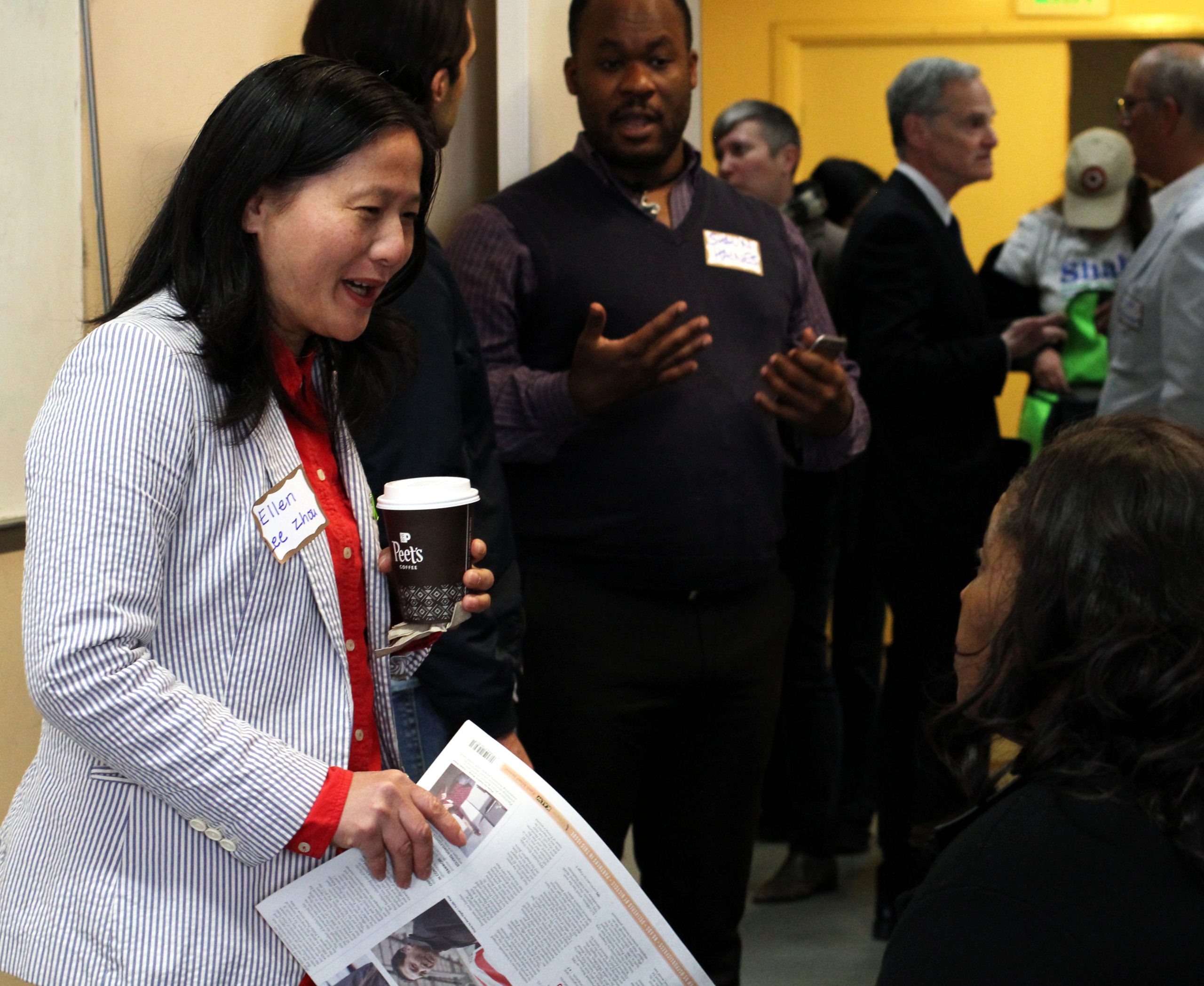 Mayoral candidate Ellen Zhou at a May 5 election forum, hosted and moderated by the Public Press, that focused on issues affecting the African-American community. Photos by Noah Arroyo // San Francisco Public Press

Sixth in a series analyzing the mayoral candidates’ records and pledges on housing and homelessness.

Ellen Lee Zhou has a plan to end San Francisco’s homelessness crisis. And it could involve you.

Zhou, a public health worker who is competing against some political heavyweights to be the next city mayor, said that if elected June 5 she would pay homeowners monthly stipends to house and mentor some of the city’s estimated 4,353 unsheltered residents. Zhou argues that many homeowners would jump at the opportunity to help someone.

“Nobody wants to see homeless die on the street,” said Zhou, who has been a psychiatric social worker at the San Francisco Department of Public Health for more than a decade and frequently works with homeless people.

“If you talk to any average people who have a home, who have units, they love to help people. Because when you help people, you feel good,” she told the Public Press in an interview after a candidates’ forum in May. “Many of the homeless people, they need support. Like a mentor. Like a person who can coach them — not only does the job and not only a rehab counselor — but a person really give them love and support.”

Her proposal, which she would pay for by trimming the budget elsewhere, resembles San Francisco’s forthcoming “host homes” program, though the city’s is aimed only at homeless youths between the ages of 18 and 24. Pregnant, minority and LGBTQ youths will get priority. A January report estimated that the program could house 30 youths with members of the community for periods of between three and 24 months, at a total cost of about $350,000.

The city is working with the U.S. Department of Housing and Urban Development to iron out a contract, with federal funding, for a host-home program that is to begin by late summer or early fall, said Ali Schlageter, youth programs manager at the city’s Department of Homelessness and Supportive Housing.

The Public Press examined the host-home concept as one of several potential solutions to the homelessness crisis in a fall 2017 special report.

On their campaign websites and during debates, Zhou’s competitors have advocated a different approach for quickly housing many of San Francisco’s unsheltered residents: expand the Master Lease Program, which rents thousands of rooms in single-room occupancy hotels to low-income tenants at subsidized rates. In his pledge to end street homelessness by 2020, Mark Leno has said he would move people into the roughly 1,800 rooms in privately owned SROs that the Public Press revealed last fall to be vacant.

But Zhou said that SROs would be unsuitable for many of the people on the streets. Rooms can be cramped and dilapidated, and many of the buildings lie in areas burdened with blight and open drug use. A tenant’s worst vices might be just a brief stroll from the front door.

Besides that, homeless people “do not want SROs,” she added. “They want a regular, normal apartment, just like everybody else. A roommate, or somebody supportive, a counselor, or somebody who is mentoring them to get out of those negative impacts that draw them, urge them to go back to something that is not good for them.”

But if vacant SROs are used, she added, they should go only to the most high-functioning, formerly homeless people “who have self-control.”

Zhou pointed out a major flaw in City Hall’s approach to clearing encampments: There is not enough available housing for the displaced. She proposed persuading the state or federal governments to fund the construction of a triage center within city limits to temporarily house people while they’re being evaluated and queued for other services and/or housing.

“If they’re homeless, then we pick them up,” she said.

Zhou has no lack of self-confidence, which was on display at a May candidates’ forum focused on the African-American community. She began responses to several questions with what has become her trademark, laugh-inducing phrase: “You are talking to the right person.”

Zhou touts her experience and being well connected in her community. When she was a teenager, she and her family immigrated to San Francisco in 1986 from Taishan, in the southern China province of Guangdong, and she has been active in Asian-American affairs for more than 25 years. A born-again Christian and Sunday school teacher for two decades, Zhou also has been a union representative at Service Employees International Union Local 1021 for more than a dozen years. She recently served two terms on the city’s civil grand jury, examining the workings — and shortcomings — of City Hall at various levels.

Small Property Owners Reach Out to Her

It is through her community connections, she said, that she has encountered many small property owners who have told her they hold rooms empty to avoid burdensome city regulations and litigious tenants.

Zhou said she gets many calls from landlords who don’t speak English, asking for guidance on how to handle a lawsuit from a tenant. Last year, she got 15 such calls regarding lawsuits for millions of dollars, Zhou said.

Zhou said that in her conversations with small property owners, she has seen a trend of lawyers persuading tenants to sue their landlords, sometimes over fabricated scenarios. If elected, Zhou would scale up mediation services to solve problems before they escalate. And she would provide free legal counsel to small property owners when lawsuits could not be avoided.

This could make landlords more willing to rent out their vacant rooms, increasing the available supply and ameliorating the housing affordability crisis.

In a video interview published by NTD Television, however, Zhou struck a different tone. She appeared to oppose the key mandate of Proposition F, which would provide free legal counsel to tenants facing eviction. “We will do mediation,” she said. “If they want to do lawsuit, the tenants should pay for their own legal fee. No legal help.”

The Pitch to Owners on Hosting Homeless People

Exactly how many rooms or units property owners are keeping empty has defied quantification. A 2014 report by SPUR, a San Francisco-based planning and urban research think tank, used U.S. Census Bureau data to estimate that about 30,000 housing units were vacant in the city, most commonly so that they would remain available for seasonal, recreational or occasional use.

To Zhou, these numbers represent an opportunity.

She made a mock pitch. “Would you like to shelter a person? And this person is not that bad. It’s just that they need a little help. I’m going to give you $2,000” per month. “Your contract’s about six months, and I want you to help in the transition of this person, to stay away from drugs and help him, or help her, have a job. And we’ll work with you. Would you like to help us?” Case managers and medical workers could visit the tenant on-site.

She said that she owns a house in Potrero Hill, “but I don’t have any extra room to rent.” If that changed, she added, she, too, would host and mentor someone who was homeless.

Despite Zhou’s suspicion that there are many thousands more unsheltered homeless people than the city’s latest count of 4,353 people, she is certain that enough homeowners would participate to theoretically house everyone. “I have hope, I have faith,” she said, adding that this would allow the government to engage homeowners in helping to solve the homelessness crisis, sending the message that “we are in it together.” Many people might need intensive medical or social services in preparation for these living environments, she said.

Zhou is confident she could find fat to trim off the Department of Homelessness and Supportive Housing’s budget to pay for this new initiative. “The city policy fails us,” she said. “If you calculate the total budget and the number of homeless that we serve, it’s minimum $6,000 per homeless per month. We can give them $6,000 to live in a fancy hotel, do you understand?”

Actually, this math does not bear out. The city’s 2017 official Point-in-Time count estimated that a total of 7,499 homeless people were living in San Francisco. Dividing the homelessness department’s budget for fiscal year 2016-2017, $275 million, by that population yields an average per-person, per-month expenditure of about $3,056. But Jeff Kositsky, the agency’s director, said in February that the city actually serves 20,000 people annually.

Though it is a convenient metric, a per-person average cost does not account for the wide variance in services that different people receive — a 90-day stay in a temporary shelter is cheaper than a multiyear tenancy in supportive housing, where medical treatment and other services are provided.

Asked to clarify how she arrived at her $6,000 figure, Zhou did not answer the question directly. “The best answer and the most accurate estimate is to ask the mayor’s office for exact budget for all related [expenditures] to homeless programs,” she wrote in an email. “It is way more than $6,000.00 per a homeless, per a person, per a month. The biggest cost is personnel, the people who provide services to homeless people.”

Zhou’s program would require the formerly homeless tenants to get and keep jobs. “Because we want them to have a second chance at life. This way they can have a clean role model to look into,” she said. “At the same time, give them case managers and doctors and nurses to follow them.”

“They have to pay 30% of their income,” Zhou wrote in follow-up correspondence with the Public Press, without clarifying whether that money would go to the landlord or to the government.

If elected, Zhou said she would alter many of the city’s policies to push back on the homelessness crisis. For example, she would try to discourage transients from coming to the city by tightening the eligibility requirements for people to receive homelessness services. And she wants to stop the Department of Public Health’s plans to set up supervised injection sites in August — the first in the nation but against federal law — which are intended to reduce overdoses among intravenous drug users and curb the volume of used needles littering the streets. Zhou said that injection sites will just encourage drug use, and that the health department should lean more heavily on programs designed to help people off of drugs.

She criticized the city’s general policy approach as being too liberal, by focusing assistance on “people who are on welfare, who are non-working people, who are not functional because they depend on drugs, they’re selling drugs, or they’re mentally incapable of living on their own.” She said City Hall should “retrain the homeless people to be independent, so they can live a life with dignity, they can have a job, they can make their own money.”

Zhou realizes that these would be dramatic shifts for the city.