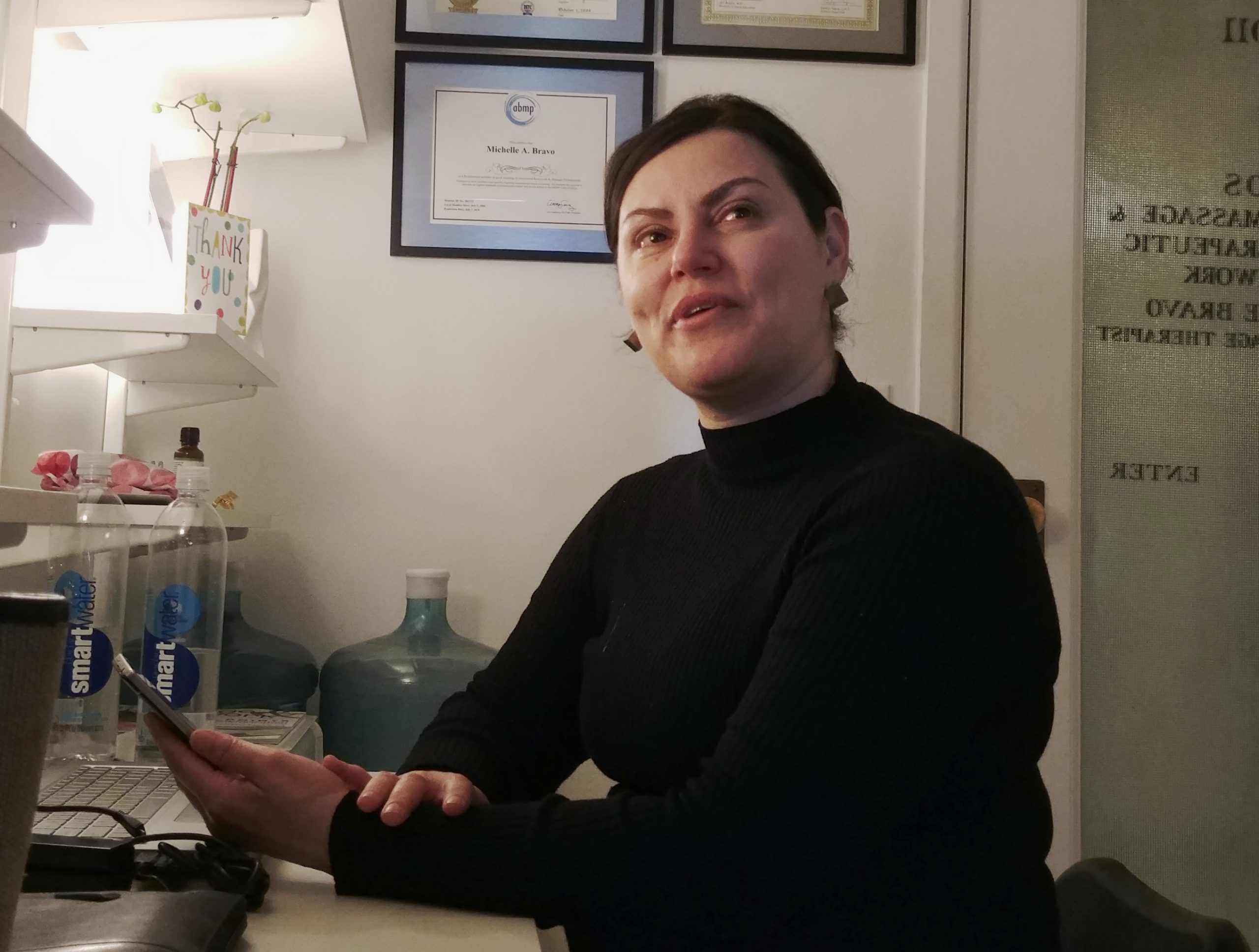 In addition to “doing this mayoral run mostly for the experience of it,” holistic-health practitioner Michelle Bravo says she is trying to influence broader policy discussions, exposing seasoned politicians to concepts foreign to them. Photo by Noah Arroyo // San Francisco Public Press

San Francisco mayoral candidate Michelle Bravo wants to win, but that is not her first priority.

A political neophyte, the holistic-health practitioner admits she has much to learn — in fact, her main reason for entering the race was to get a crash course in the local issues. Many of her proposals are driven by her “gut” about what would make San Francisco a better place, she said, rather than by any deep knowledge of, or data on, key issues and the workings of government.

She has no policy proposals for fixing the housing-affordability and homelessness crises, and no experience with either issue. She would prioritize affordable housing for city workers and redirect some homeless people from jails to a new holistic-health facility. She has no estimates of how much either would cost.

If elected, she said she would hire expert consultants to help her understand and grapple with those problems. She would also conduct performance audits on City Hall departments to locate inefficiencies.

Public Workers Would Live in City

Bravo’s primary housing agenda, as such, is to increase the number of public workers living in the city. She would require developers to set aside 20 percent of affordable housing, beyond current levels, specifically for city staff. Doing so would, in essence, further strain the unmet — and escalating — demand for affordable housing, likely crowding out low-income residents.

By her reasoning, city employees have a greater ability than other residents to improve how the city works. But they need to live in San Francisco, and experience City Hall’s malfunctions firsthand, to be galvanized to change life for the better.

First responders — police officers, firefighters, medical and other emergency workers — have elevated importance to Bravo among the approximately 30,900 full-time city workers. Disaster could strike at any time, so the public-safety workforce must be present.

Bravo also said that police officers should live in San Francisco because, being a part of the community, “they may be more prone to having our values or actually caring about the people they’re serving,” and other residents might trust them more. Those who do not live here have “no connection to the community in terms of safety and care.”

“Their hearts and their minds and their votes go to people in other little towns that they live in,” Bravo said. “They come in, they punch in, and then they go back home.”

San Francisco consistently ranks among the most expensive cities in the nation, and different types of public workers have vastly different capabilities to afford it. The annual salary for a public-school teacher in his or her first year, with minimal work experience, was $55,225 for the 2017-2018 school year, district documents show. Many first responders earn much more.

The annual salary for entry-level officers at the San Francisco Police Department was $84,682; for firefighters, $76,388, and for paramedics, $69,992, according to data for the most recent fiscal year from the San Francisco Department of Human Resources. Promotions, contract pay steps and overtime can boost those salaries to between $200,000 and $375,000.

The median income for a one-person household in San Francisco was $82,900 in 2018, according to the Mayor’s Office of Housing and Community Development.

Bravo said she wants 50 percent of first responders to live in the city by 2025. When asked if she knew of any studies documenting the connection between residency and professional effectiveness, for any type of government position, Bravo said she did not.

About 24 percent of San Francisco’s police officers, and 29 percent of firefighters, live in San Francisco, based on documents from the city’s Human Resources Department. Those rates are higher than almost any other Bay Area county; only San Mateo has more police officers who are also residents, about 27 percent.

A Holistic Response to Homelessness

Much of Bravo’s agenda for how to address homelessness in San Francisco revolve around holistic-health treatment approaches, which try to address the emotional, mental, social and spiritual causes of illness.

If elected, she said she would establish a “holistic wellness and mental health institution.” She would also sponsor legislation redirecting homeless people from jails to this new facility in certain scenarios. Staff would be on hand to administer more mainstream, or “Western,” medical practices as appropriate, she said. Complementary treatments would also be available, such as herbal remedies, acupuncture and massage. If a client did not want to be touched, he or she might be given aromatherapy or music therapy.

Bravo offered no comprehensive understanding of the city’s approach to treating homeless people, and provided no evidence that a holistic approach would be effective with this population.

“I don’t really feel that what we’re doing is enough,” Bravo said. “If it were, they would all be off the streets by now, right? We’ve got a heck of a lot of money going into these programs and they’re not necessarily working.”

The homeless population in San Francisco has grown slower than in the state as a whole in recent years. Jeff Kositsky, the director of the city’s Department of Homelessness and Supportive Housing, said in February that he would need $750 million, or about triple his budget, in order to get everyone off the streets and into housing.

Bravo said that, in addition to “doing this mayoral run mostly for the experience of it,” she is trying to influence broader policy discussions, exposing seasoned politicians to concepts foreign to them. If they hear about holistic health approaches, she said, “maybe they will get the idea and integrate even a portion of what I’m telling them.”