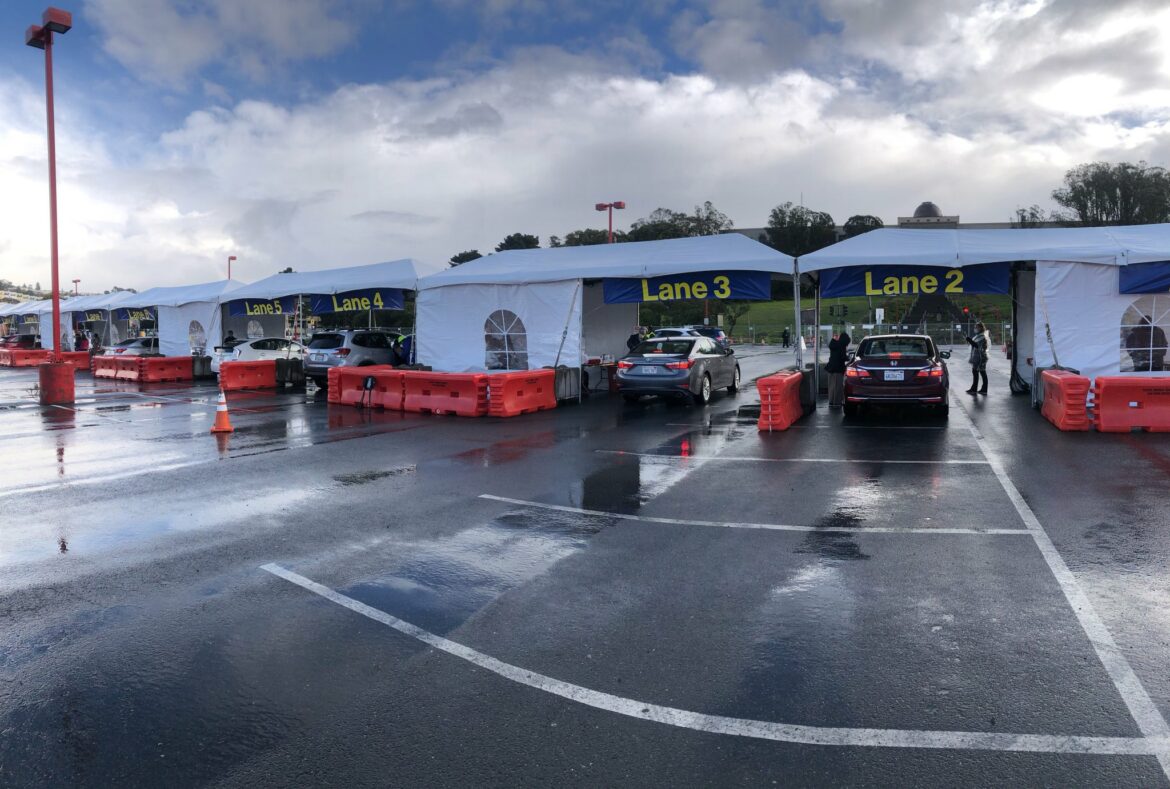 A mass vaccination center opened Friday on the campus of City College of San Francisco.

San Francisco health officials have set an ambitious goal of vaccinating all 900,000 people who live and work in the city by the end of June, and took a step toward that goal Friday by opening a mass vaccination center at City College of San Francisco. The site was announced this week, amid confusion and frustration with the city’s notification system and vaccine rollout.

“In many cases in recent weeks, they were told by our county that they should go talk to their doctor or provider, who then turned around and told them that they should go back and talk to the county,” said Supervisor Matt Haney at a hearing he called this week to answer outstanding questions about the city’s vaccination plan. “Some waited five hours on the phone only to be told that they couldn’t be scheduled for an appointment. Others have been able to get no clear answers at all.”

The city’s health officials and several representatives of private health care providers presented their plan to the supervisors at Wednesday’s hearing. The main problem, they said, was not having access to enough supply of the vaccines. At the hearing, several also cited California’s recommendation last week that one batch of Moderna’s vaccine not be administered because of reports of unexpectedly high rates of allergic reactions. By Friday, the state had reversed that recommendation.

Roland Pickens, director of the city’s health network, which includes community clinics and two hospitals, said the city will be using a three-pronged strategy to work toward the June 30 goal.

The first prong is mass vaccination centers, which the city plans to open at Moscone Center, City College, and the Wholesale Produce Market in the Bayview. Friday’s opening, Pickens said, would serve as a test run of 500 doses injected. Moscone Center and the produce market site are due to open by Feb. 1.

Pickens said the city plans to use mobile and community-based distribution methods, including vans going out to people who have no health care provider and can’t get to the mass sites. Long-established community clinics run by organizations like Healthright360 and Mission Neighborhood Health Center would also be involved, Pickens said.

Private health care networks have been receiving vaccine doses from the state. Groups like Kaiser, Sutter and UCSF are considered “multi-county entities” and receive allotments of vaccine from central hubs. The interactions between those entities, the state, the county and the clinics, has complicated this process, officials said at the hearing.

“The MCEs get their allocations from their corporate motherships, as we call them,” Pickens said. “It’s very much out of their control for our local MCEs. UCSF doesn’t get to decide how much of the UC allocation they get, it’s given to them by their mothership.”

That pits local branches of these entities against their counterparts in other regions, like Southern California. And neither municipalities nor private companies may procure vaccine doses on the private market.

“It’s important to remember none of us can do what we usually do, which is go out on the open market and by our suppliers and pharmaceuticals. That’s not an option here,” said Pickens. “You only get it one way. You get it for free and you get it from the federal government.”

At the mass vaccination sites, Pickens said the city would be responsible for providing the venue while private providers would provide the vaccine and the personnel. Friday’s test run was to vaccinate only UCSF patients, because the city does not yet have a centralized scheduling system and the site is initially using a UCSF scheduling system, Pickens said. Ultimately, however, the mass sites will be open to anyone, regardless of insurer.

Private insurers have also been making some of their doses available to non-members, but non-members may need to take more steps than members to access them.

“I wouldn’t say we’re de-prioritizing or prioritizing, but certainly a member is going to have an easier experience with it,” said Ron Groepper, a regional senior vice president with Kaiser Permanente, when supervisors pressed him on non-members’ ability to access the vaccine through Kaiser.

Pickens said the city also plans to work with pharmacies. Walgreens and CVS have submitted applications to be state-approved vaccine entities, which would allow anyone to get coronavirus vaccines in the same manner they would a flu shot. It’s unclear when that would become available.