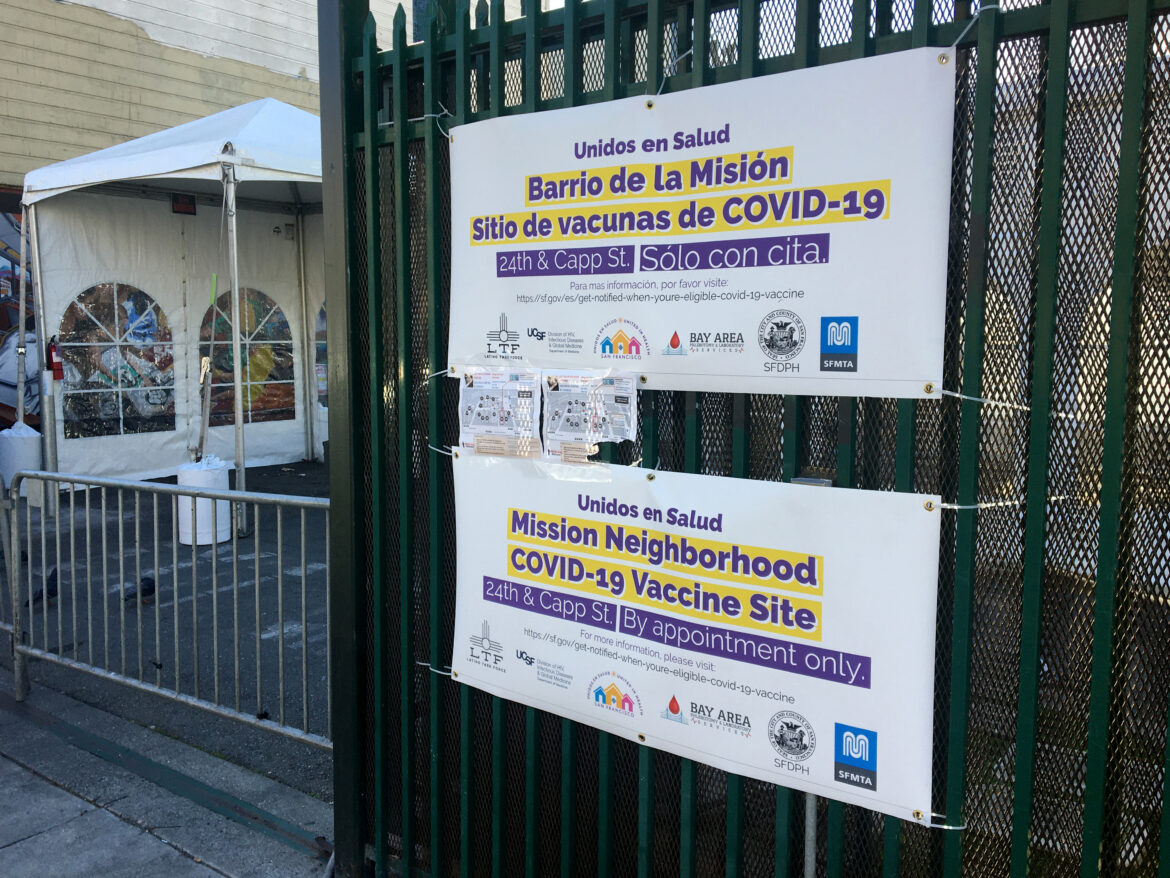 A vaccination site opened in the Mission District on Feb. 1, 2021.

The Mission District now has a neighborhood coronavirus vaccination center, steps away from a testing center. Launching it was a collaborative effort among the city, the community-based Latino Task Force and the University of California, San Francisco. On Tuesday, some residents of the Bayview were able to get vaccinated at a Bayview pop-up site.

The neighborhood sites are part of an effort to bring resources to those who have been most affected by the pandemic. The Mission District, and the city’s Latino population, have seen disproportionate infection rates and deaths from the virus. On Monday afternoon, after the first day of administering vaccines, Latino Task Force Health Committee Chair Jon Jacobo spoke with “Civic” about the launch.

For now, only people over 65 and health workers within a network of people who have been tested with the Latino Task Force and UCSF’s collaborative Unidos en Salud effort are eligible for a vaccine there. That focus is specifically to ensure that those who have suffered the worst effects of the pandemic are helped first.

“It’s not that all of us don’t need it, of course,” he said. “What we’re trying to do is tackle and protect those closest to the pain first. And as we do that, we can work down the list.”

The neighborhood sites and prioritizing those already registered with Unidos en Salud are part of the city and task force’s efforts to address the racial and ethnic inequalities that have been thrown into sharp relief and exacerbated by the pandemic nationally and locally. White people have also been vaccinated at higher rates throughout the U.S. compared with Black Americans.

“The one thing I do fear is the disproportionate rollout of vaccines in other parts of the country, where we have seen a lot of folks within the white community — that maybe have not been suffering to the large degree — going into neighborhoods like Washington Heights out in the East Coast or South Central L.A. just down south, going into communities of color, where they know there’s vaccines, and trying to take either the appointments or get the ones that weren’t used, etc. That is a concern that I have that we haven’t seen yet here in San Francisco,” Jacobo said.

Partly to foil vaccine chasers, doses that go unexpectedly unused at the end of a day would only go to others on that priority list, he said. Those who are not essential workers and can stay home should consider their ability to lower risk and whether it makes sense to try to jump ahead of higher-risk individuals for a vaccine, Jacobo suggested.

Ultimately, he said, “the solution, of course, is for the feds, the state and the city to have enough vaccines, number one, and number two, the proper infrastructure to ensure that they can disseminate these things widely.”

The Mission site is distributing 120 doses a day, with a goal of scaling up to 200-400 per day if vaccine supply allows, according to city officials. Vaccines are by appointment only and the site operates Sunday through Wednesday. Citywide, those eligible for the vaccine, currently frontline health care workers and those older than 65, can make an appointment at SF.gov/getvaccinated.