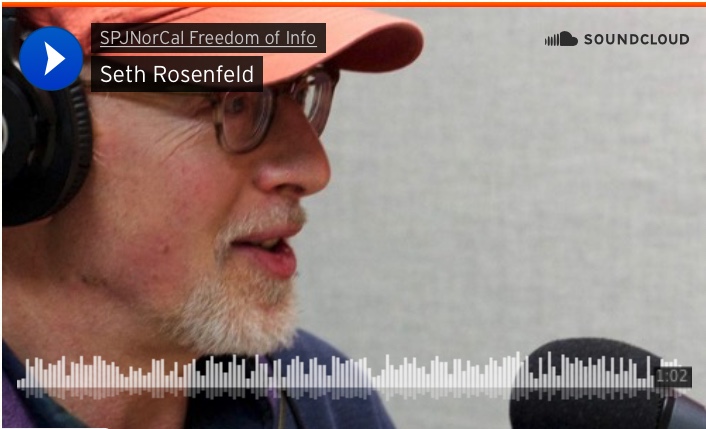 Rosenfeld spent five months in late 2019 and early 2020 digging into the cozy relationship between the California Public Utilities Commission and the companies it purportedly regulated, Uber and Lyft. In “Ride-Hailing’s Dark Data,” launched online in January 2020 and as a print edition cover story, Rosenfeld found that for six years the commission withheld from public view annual safety reports detailing the industry’s troubling record of crashes and injuries, with sometimes deadly consequences.

In preparation for his 10,000-word initial article, “California Agency Is Hiding Uber and Lyft Accident Reports,” Rosenfeld pored over hundreds of lawsuits filed in San Francisco Superior Court, finding that scores of out-of-court settlements with accident victims obscured systematic problems with the hiring, supervision and training of drivers who were responsible for injuring riders and pedestrians.

The Northern Chapter of the Society Professional Journalists recognized Rosenfeld’s efforts when it announced the 36th Annual James Madison Freedom of Information Awards on Tuesday. The awards call attention to journalists, community leaders, lawyers, government employees and civil society advocates who “have made significant contributions to advancing freedom of information and expression in the spirit of James Madison, the creative force behind the First Amendment.” The awards coincide with Madison’s birthday, March 16, celebrated as Freedom of Information Day, during National Sunshine Week.

The failure of the California Public Utilities Commission to release detailed annual safety datasets submitted by the companies made it an important accountability story. The piece identified an obscure clause in a commission regulation — footnote 42 — that allowed the companies perpetual confidentiality. The commission even fought against local governments and safety watchdogs in keeping the public safety effects of the burgeoning industry secret.

Through a series of public records requests, Rosenfeld was able to get ahold of summary documents from the Public Utilities Commission and several other agencies that tell of the meteoric rise in the number of cash settlements with accident victims as the industry grew in prominence in less than a decade.

The project included follow-up stories throughout the winter and spring of 2020, and interviews on “Civic,” the Public Press’ daily radio show.

And it generated immediate calls in the California Legislature to reform state oversight of the industry. Within two months, political pressure built in Sacramento that led to the footnote’s repeal at a commission meeting.