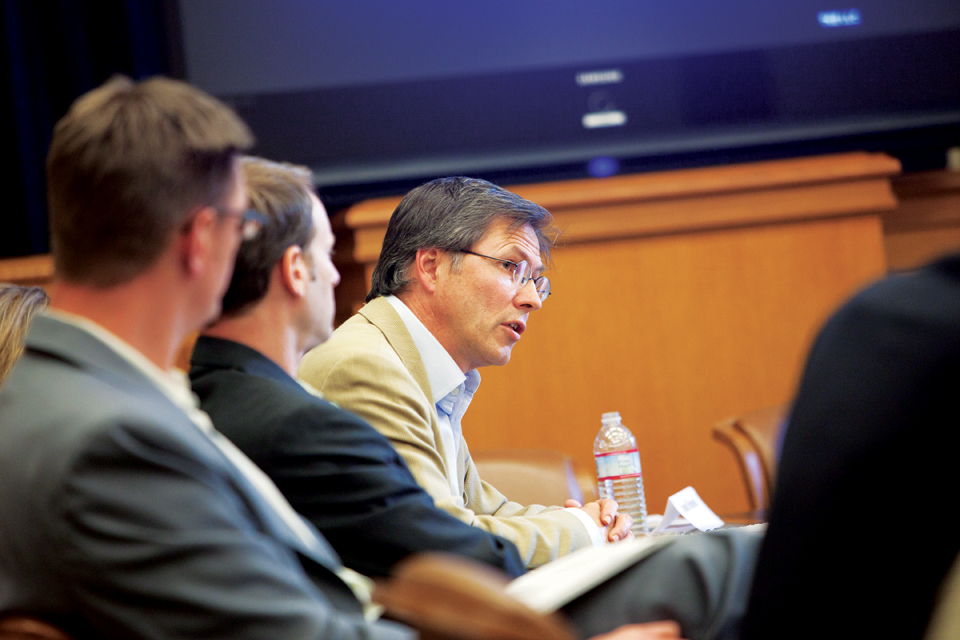 The developers of Treasure Island stand to earn a potential 20.6 percent return on their investments if the 18-year, phased construction plan and land sales proceed as they predict. That does not include possible future real estate sales.

But San Francisco officials say the potential private upside is laced with long-term economic risks — only some of which are calculable — that will be borne mostly by the partner firms in Treasure Island Community Development, and their investors.

The massive and long-term project is complex and inherently uncertain, with homes and businesses to accommodate up to 20,000 people. Much of the uncertainty centers on the inexact science of predicting property values, as amply demonstrated by the recent housing bust.

Though many of the details have yet to be worked out, the Treasure Island Development Authority says that much of the payback from land sales will occur in later phases of the project, encouraging the developers to stick with it for the long haul and follow through with hundreds of millions of dollars in up-front investments before making a profit.

“In the first phase, they will not get their return,” said Jack Sylvan, redevelopment director for the Treasure Island Development Authority, the city’s agent negotiating the public-private partnership with the developer consortium. “And it’s likely that in the second phase they won’t have been able to get their return. Their ability to get their return is by being successful over a very long time period. Unless they hit some massive upswing in the market.”

Under the current agreement, San Francisco will earn roughly $13 million a year for the city’s general fund — as the project nears completion — due to the expanding  real estate tax base. Nonmonetary benefits include a slew of public goods, such as 300 acres of open space and parks, an additional 2,260 units of affordable housing, 2,590 new jobs, and environmentally advanced architecture, landscaping and energy systems.

But not all city officials have concluded that the redevelopment plan is a good financial investment, especially because the land will require $1.5 billion in investment just to prepare the ground for building.

“Anyone in their right mind would say that in this current economy, it’s a stretch,” said Aaron Peskin, former president of the Board of Supervisors. “The economy has changed forever, and it’s become more rational. No one is going to give a government or developer major amounts of capital to shore up an island built on fill.”

Peskin called Treasure Island “a blob of Jell-O in the Bay,” adding: “The best thing is to let natural processes do its thing, and allow it to return to that which it came.”

Sylvan acknowledged that Treasure Island “is about as risky a project as you can find.” But he argued that the risk will mostly accrue to the developers, who are putting up at least $548 million in performance bonds on the private market over the life of the project. Sylvan said the partners in Treasure Island Community Development expect a return based on their economic projections. And they need to show these projections to investors to get any investment.

The risks are many, Sylvan said:

Treasure Island Community Development is made up of several developers and investors. Lennar, a national homebuilder, will cover half of the consortium’s horizontal costs, which amount to $274 million. The other half will be paid by Stockbridge Real Estate Funds, a private San Francisco-based investment firm. Stockbridge is partnering with Wilson Meany Sullivan, a real estate and development company known for its rehabilitation of the San Francisco Ferry Building. Kenwood Investments, one of Democratic lobbyist Darius Anderson’s many investment operations, is also part of the partnership, although it will contribute no money. Kenwood representatives declined to comment publicly on their role.

So far the developers have spent almost $53 million on the deal, $6 million of which has covered the costs of the city’s redevelopment staff and consultant expenses. Treasure Island Community Development has been in exclusive negotiations with the city since 2003.

According to the 2010 term sheet — the development contract approved by the Board of Supervisors in May — Treasure Island Community Development will contribute a total of $548 million to prepare the island for “horizontal” development, which includes seismic stabilization, underground infrastructure, environmental remediation, roads and a ferry quay. The developers will also contribute $91.7 million in subsidies toward of affordable housing construction.

Treasure Island Community Development will pay the Navy $55 million plus interest over 10 years. They then will compensate the Navy an additional $50 million if the developer achieves an 18 percent annual internal rate of return, which is projected by 2021.

Higher levels of profit will be further split between the developer, Navy and the city. The deal puts the Navy first in line for revenues, and then the developers. The Treasure Island Development Authority comes later.

Michael Tymoff, the redevelopment project manager for the city, insisted that the city will not be responsible for problems with project financing. No money for the development will come from the city’s general fund.

Instead, the city will tap Treasure Island newcomers for $944 million, through community facilities district taxes known as Mello-Roos bonds, and tax-increment financing, to be repaid by the new residents over the next 30 years.

The city has designed several financial benchmarks to ensure that it does not shoulder undue economic risk. It has divided up the horizontal development into several phases and sub-phases, anticipated to last through 2028. Before each phase begins and the city hands over a portion of property, Treasure Island Community Development must find a third party to put up a performance bond, or guarantee, that equals the value of the phase’s cost. If the developers default at any point during a phase, the city retains the value of the bond, allowing it to complete the phase with a new contractor.

For example, during the first phase, currently slotted to span from 2011 to 2013, Treasure Island Community Development will spend $196 million before it earns any revenue, and will be required to complete a portion of the public benefits and horizontal development before proceeding to the next phase. The details of each phase — its length and what must be completed — are still under negotiation, said city officials.

The developers’ potential reward for shouldering so much risk comes in the form of real estate. The term sheet specifies that the city will retain ownership of the developed public spaces, several historic buildings and 1,984 housing pads. The city will partner with affordable housing groups to build those homes.

Of those, 435 units will be operated by the Treasure Island Homeless Development Initiative, a collaboration of community organizations that carry out the federal Base Closure Community Redevelopment and Homeless Assistance Act of 1994, which requires that all former military sites assist homeless people in some way. The collaboration currently oversees 250 units on the island that will be rebuilt and will be given an additional 185.

The remaining 20 percent must be auctioned to other builders. Five percent, or 275, of all the new units, must be sold or rented to people whose household income is below or equal to the area’s median household income — $73,127 for San Francisco in 2008, according to the most recent figures from the U.S. Census Bureau.

The developer estimates that the commercially priced units will range from a low of $597,000 for a low-rise flat to a high of $1.2 million for the 200 townhouses to be built on Yerba Buena Island, based on current market prices.

Based on the contract between the city and Treasure Island Development Authority, which is limited to the horizontal development, it is not possible to calculate the developer’s total revenue or profit, the majority of which could be earned through home and commercial real estate sales.

Treasure Island Community Development also has the right, and in some instances a requirement, to develop all of the commercial space, including two hotels with a total of 500 rooms.

The agreement also requires the Treasure Island Development Authority to enforce greenbuilding design standards with all builders. But many of the environmental big ideas have still to be worked out in detail. Everything from the alternative energy and a large organic garden to maintaining the island’s parks hinges on the city developing new partnerships with companies and organizations to share the costs of these green amenities. Sylvan said that developing these new partnerships