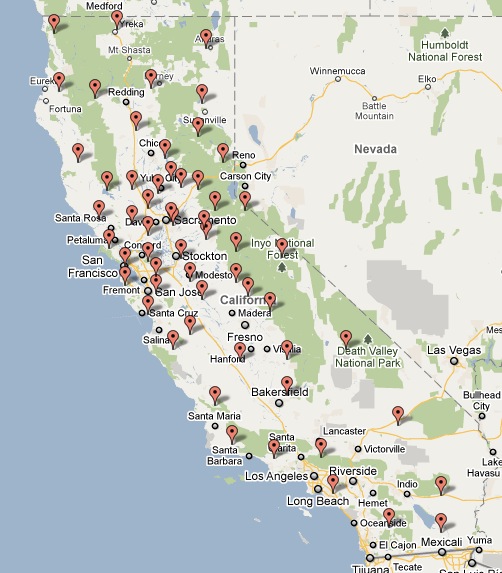 The Secure Communities program, which has rolled out a data-sharing system with local authorities, has increased deportations after minor crimes across the state. See the interactive map by Jason Winshell.

Jason Winshell, Photo Editor, Photographer and Reporter |
LikeTweet EmailPrint More
UPDATE 5/2/11: Sherriff Michael Hennessey wrote an op-ed piece in the Sunday San Francisco Chronicle explaining his position on Secure Communities.
San Francisco is set to revive a portion of its long-standing “sanctuary city” policy, which until last June protected undocumented immigrants arrested on minor criminal charges from the scrutiny of federal officials.
The 1989 policy shielded people arrested on non-felony charges without felony histories from being reported, and then turned over to, U.S. Immigration and Customs Enforcement.
But last June, a controversial program called Secure Communities rolled out in San Francisco, automatically sending identification and fingerprints to a database that allowed officials to flag suspected violators of immigration law. Authorities could then use that knowledge to request law enforcement agencies to hold suspects for detention and possible deportation.

The map shows deportations in California for non-criminal and minor offenses under the Secure Communities program. Click on the flag to see details about each county. Source: Department of Homeland Security. Map by Jason Winshell.

San Francisco Sheriff Michael Hennessey now believes, based on private statements from federal officials, that he is not legally required to honor the so-called “immigration detainers,” said the sheriff’s spokeswoman Eileen Hirst. She said the department is now reviewing its options, and seeking “guidance” from the Sanctuary Ordinance.

Nine months after the federal data-sharing system synched up FBI and Homeland Security records, federal authorities have deported more than 100 people from the San Francisco city jail who had no criminal record.
Now many of those deportations could come to an end. While David Venturella, executive director of Secure Communities, repeatedly indicated to Hennessey in a meeting on Nov. 9 that opting out of immigration checks on fingerprints was not possible, localities were not required to hold arrested suspects for Immigration and Customs Enforcement.
“Venturella stated no less than three times that an ICE detainer is ‘merely a request,’ and further stated that there is no federal law or mandate or court case that requires local jurisdictions to honor ICE detainers,” Hirst said.

The sanctuary city ordinance was designed to protect the rights of immigrants who might turn out to have been innocent of the crimes for which they were arrested but who were suspected of violating immigration law. Police reported only those people to immigration who were booked on felony charges or had felony histories, had identified themselves as foreign-born, or who had been determined to be foreign-born.

Many local leaders still say it is not their job to enforce federal rules. Immigrant advocates agree. Angela Chan, a staff attorney at the Asian Law Caucus in San Francisco, told KALW News in October that there was a constitutional issue at stake: The 10th Amendment prevents the federal government from requiring state and local authorities to do their work for them.
Another problem with Secure Communities is that it puts disadvantaged immigrants in immigration jeopardy, Hirst said. Under the new law, a victim of domestic violence or human trafficking can be deported if he or she is arrested along with the perpetrators, she said. The simple running of a criminal background check automatically notifies Homeland Security.
Until recently, local officials thought there was no legal way to refuse federal requests to keep suspects in jail until they get deported. Hennessey changed his mind late last year, when Venturella was quoted saying detainers were optional.
Hennessey, himself a lawyer, “is very careful that policy changes pass legal muster,” Hirst said. “Now that he knows that he is not legally required to honor an ICE detainer, that is what got the conversation going.”

Last summer, critics of the Secure Communities rollout in San Francisco predicted it would lead to increased federal seizures and deportations of immigrant suspects.
That appears to have happened. From June 8 last year to Feb. 28, a total of 241 people arrested in San Francisco and flagged by the federal database were turned over to immigration officials, according to Immigration and Customs Enforcement data released after a freedom-of-information request by civil rights groups.
Of those, 111, nearly half, were people in a category previously shielded by the city’s sanctuary policy — those with no criminal record. Adding people arrested for minor offenses, that number climbs to 187, or 78 percent of all the deportations that occured out of the San Francisco jail.
Hirst said that Hennessey was working with Sheriff’s Department attorneys, other city departments and advocates for immigrants on a policy that would block some immigration detainer requests that came from Immigration and Customs Enforcement. But that would only be for certain classes of people held at the county jail.
Secure Communities first rolled out in California, county by county, in 2009, reaching San Francisco last June. It is essentially an information-sharing program between the Department of Justice and the Department of Homeland Security — part of the legacy of border reforms enacted after the terrorists attacks of Sept. 11, 2001.
The program links biometric fingerprint checks made through the FBI’s Integrated Automated Fingerprint Identification System with the Homeland Security’s Automated Biometric Identification System. When police make criminal background checks with finger scans, an immigration detainer is issued by Homeland Security within hours.

There is no circumventing, or “opting out” of the immigration check. Since Secure Communities went online in San Francisco, according to Hirst, “Every single person who walks into the jail is fingerprinted and every single person is reported to ICE.”
Last March, state Rep. Tom Ammiano, D-San Francisco, introduced Assembly Bill 1081 — called the TRUST Act — which would give local jurisdictions a way of opting out of Secure Communities. The bill was covered extensively in the San Francisco Bay Guardian.
But, Venturella from Secure Communities said in the November meeting “no less than three times that an ICE detainer is merely a request,” Hirst said. Venturella told the Sheriff’s Department “that there is no federal law or mandate or court case that requires local jurisdictions to honor ICE detainers,” she added.
Venturella gave the same information to Miguel Márquez, the Santa Clara county counsel, both verbally and in writing. In response to an Aug. 16 letter from Márquez, Venturella wrote: “ICE views an immigration detainer as a request that a law enforcement agency maintain custody of an alien who may otherwise be released for up to 48 hours (excluding Saturdays, Sundays, and holidays). This provides ICE time to assume custody of the alien.”

San Francisco could be one of the first counties to act on this information. “We are now taking a look at our policy that requires us to honor all ICE detainers,” Hirst said. “We are looking to the Sanctuary Ordinance for guidance.”

Jason Winshell is photo editor of the Public Press. He also reports and does data analysis. The focus of his art is social documentary photography. In 2010, he was nominated for the SFMOMA SECA award. He has published a book of 45 color photographs about life in San Francisco, <a href="http://www.jasonwinshell.com/content/galleries/street/index.html" target="_new">“Street.”</a>