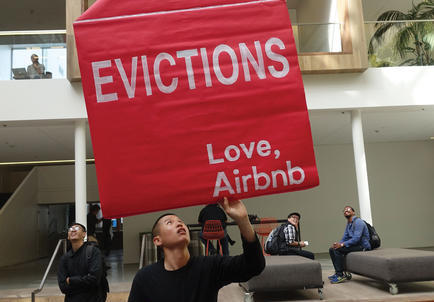 San Francisco took in $19 million from its short-term-rental tax on Airbnb last year, but unlike Los Angeles, the city did not dedicate any of it to homelessness services. Photo by Steve Rhodes // San Francisco Public Press

Is excessive CEO pay contributing to homelessness? Lawmakers in Portland, Oregon, seem to think so. That’s a major reason they approved a surtax last year on companies with high CEO-to-worker pay ratios and dedicated the revenue to homeless services.

“Rising inequality nationally is a major factor in Portland’s housing crisis because huge disparity in income allows high-income people moving to Portland to drive housing costs out of reach of middle-class Portlanders,” the ordinance declared. City Commissioner Steve Novick said the tax was “the closest thing I’d seen to a tax on inequality itself.”

San Francisco could follow in Portland’s footsteps if a measure floated by Supervisors Jane Kim and Hillary Ronen gains support. The two have asked the city attorney’s office to draft legislation based on a U.S. Securities and Exchange Commission rule requiring publicly traded companies to report how their chief executive officer pay compares with that of their workers.

“This new rule offers local and state governments, as well as Congress, the opportunity to develop policies that address the growing gap between the ultra-rich and the rest of us,” Kim told fellow supervisors in January. It is unclear how much revenue would be generated by such a tax and whether it would be dedicated to services or housing for the homeless. Kim declined to discuss her proposal with the Public Press.

Even with spending already at a quarter-billion dollars, San Francisco needs more money for homelessness, advocates and some politicians say. Jennifer Friedenbach, executive director of the Coalition on Homelessness, said she has examined the city’s homelessness budget, and “there’s not a lot of waste in there.”

“We’ve got to increase our pool if we want to end homelessness,” she added. “You have to invest in more housing — there’s just no way around it — and that’s going to cost some money.” The city must radically increase supportive housing units, where people with low incomes or those living on the streets can get both services and housing, she said.

Former Supervisor Eric Mar tried to address this need last year with a push for a tax on technology companies that would have raised an estimated $120 million annually — increasing San Francisco’s current homelessness budget of about $250 million by nearly half. That measure never made it to the ballot, and voters rejected a proposed sales tax to raise $150 million for transportation and homeless services. Undeterred, advocates are strategizing around new proposals, and an aide to Supervisor Aaron Peskin said some type of revenue-raising measure would likely hit the ballot in 2018.

“As a piece of addressing the homelessness crisis, the need for more revenue is still a pretty clear need,” said Gordon Mar, executive director of the nonprofit group Jobs With Justice San Francisco and the former supervisor’s brother. He echoed his brother’s concerns that the technology industry has worsened inequality in the city. “They really haven’t paid their fair share in taxes,” he said.

Airbnb in the Crosshairs

However, tech’s political clout could prevent politicians from backing any measures that specifically target the industry. In 2012, Airbnb investor Ron Conway packed a city hearing to fight efforts to force the company to collect hotel taxes, and Mayor Ed Lee said he intervened to prevent the city’s tax collector from following through with the move. While city supervisors did eventually pass legislation requiring those taxes to be collected, a subsequent ballot proposition to impose further restrictions on the company failed.

In 2016, Los Angeles collected $13 million from taxes on Airbnb rentals and earmarked about $5 million for homelessness services. San Francisco took in $19 million from its tax the same year, according to an Airbnb report. But none of the money was diverted to homelessness. To date, there has been no effort from San Francisco supervisors or Lee — who has had strong backing from Airbnb, Conway and the tech lobby — to pursue a similar set-aside.

The key to passing a revenue-raising measure in 2018 could lie as much in the process as the proposal. Friedenbach faulted Lee’s office for failing to build support and aggressively push last year’s sales tax measure.

“We’re hoping this time around there will be more serious effort to develop a consensus,” she said. “The mayor would have to take the leadership role in pressuring downtown, the Chamber of Commerce,” and other business groups.

Chamber lobbyist Jim Lazarus said his group might be open to new tax measures, but he pointed out that the city’s business tax collections have increased 40 percent in four years. While he attributed part of that growth to the strong economy, he said, “There’s no shortage of tax money coming in from the business community.”