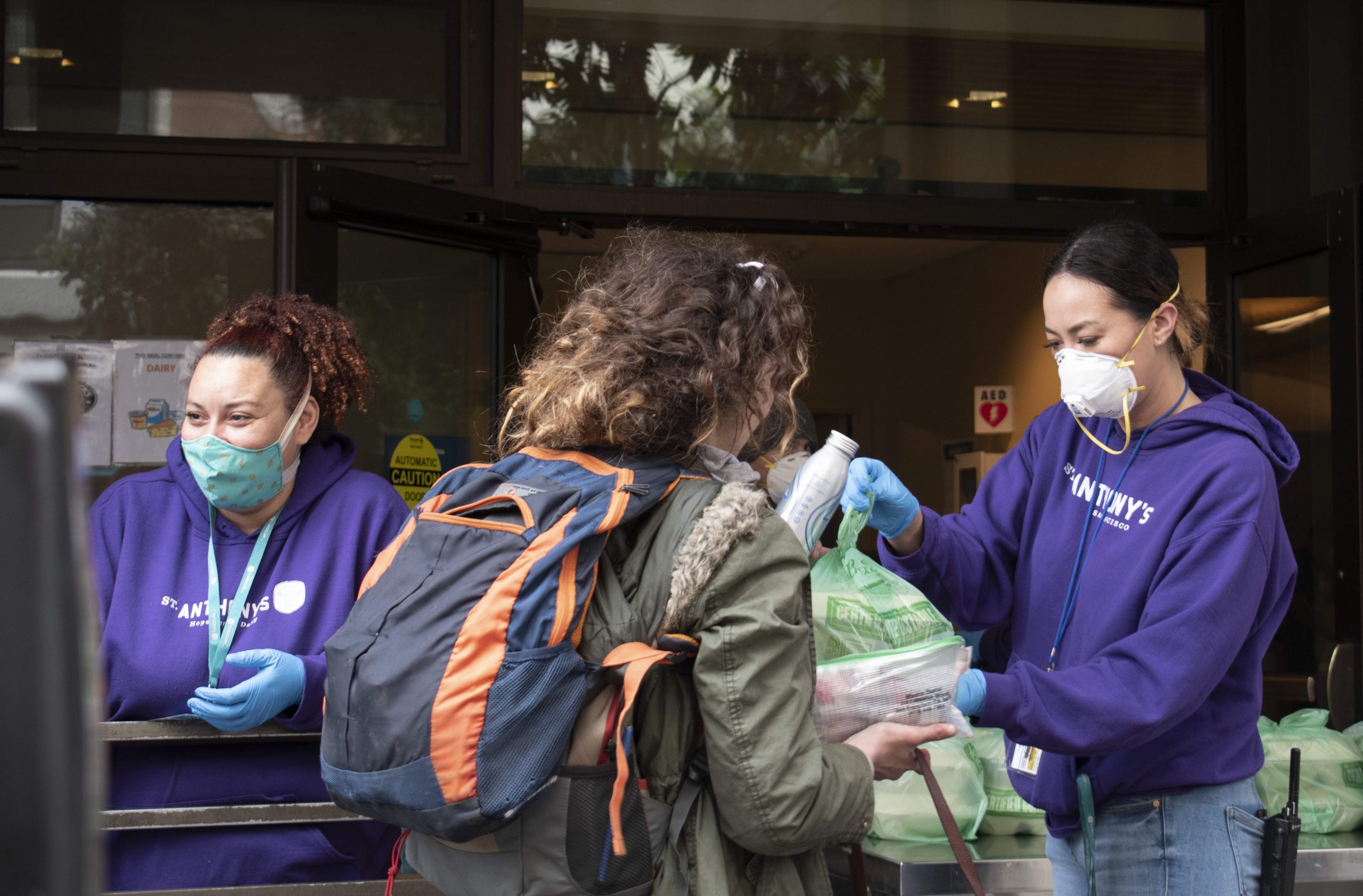 Soup kitchens and homeless service centers are pushing San Francisco officials to shut down a Tenderloin street to through traffic so their clients can maintain social distance from one another as lines wrap around the block and tent dwellers crowd the sidewalks.

The city already responded to a plea from the groups two weeks ago to protect the safety of their clients and staffers by repurposing parking spaces on Golden Gate Avenue near Market Street, where service providers now can conduct case management outdoors with enough space to socially distance, but they say it’s not enough. In the face of sustained, elevated demand for their services, they’ve renewed their campaign to close the 100 block of Golden Gate Avenue and enlisted support from District 6 Supervisor Matt Haney, who backed the previous effort.

“We need more space,” said José Ramirez, the executive director of St. Anthony Foundation, a nonprofit that provides free meals and social services. To this day, there is “not adequate social distancing,” he said.

“We’re a front-facing organization with the homeless community, a high-risk population” for COVID-19 infection, said Ramirez. His staff has transitioned many services from the interior of the organization’s building to curbside so that they are amid the foot traffic, which raises the stakes for social distancing.

And they worry that a localized outbreak might take them by surprise, as happened earlier this month when 70 people tested positive at the city’s largest homeless shelter, Multi-Service Center South. The number infected has since risen to 93.

“We know very well with this virus you can be asymptomatic,” Ramirez said.

Benjamin Lintschinger, advocacy program manager at the Glide Foundation, which provides meals and other services like HIV testing, joined an April 3 video conference the groups organized to request help from Haney, who represents the neighborhood.

“Both St. Anthony’s and GLIDE asked to close down the street and there were at least two dozen other community leaders there and there seemed to be general support for the idea,” Lintschinger said via email. Haney appeared receptive, Lintschinger said, but the idea encountered other resistance.

“I believe DPH or some others in the city were worried that closing the whole street would attract social congregation, which many community reps on the call expressed disagreement with,” Lintschinger said. “The compromise was the parking lanes.”

Asked whether the closure of parking lanes had been adequate, another Glide representative said in an email that it was “too soon to tell.”

“We’re communicating regularly with SFMTA and block residents to see how it impacts neighborhood activities as well as our operations,” added Kenneth Kim, Glide’s senior director of programs. “Yes, social distancing is hard and will continue to be a challenge. Managing our lines are challenging when people are hungry and people crowd together in tent encampments to stay safe. Mental illness and those who may have cognitive or physical disabilities also challenge our efforts.”

Haney is preparing a letter to the mayor’s office requesting the full closure, the San Francisco Chronicle reported April 17.

“I’ve been working for the last month with a coalition of TL leaders, residents, businesses, orgs for solutions to protect TL residents,” Haney said in a critique of the city’s response he posted on Twitter. “Too little has happened.”

“It is impossible for many residents to walk down the sidewalk and maintain social distance. Implement clear thoroughfares, by opening up streets, and designating areas for camping with services and hygiene,” he continued.

“The Emergency Operations Center need not wait to act, they have the power to act today under the Emergency Declaration,” he said, referring to the city agency that is coordinating the response to the pandemic.