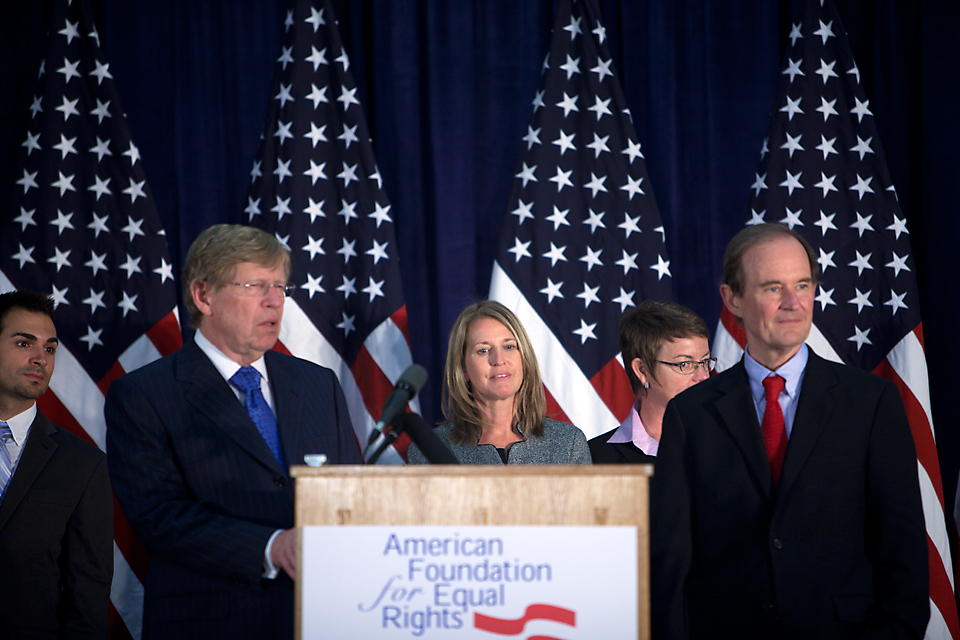 Appearing after closing arguments in the Proposition 8 trial, Paul Katami (left), Ted Olson, Kristin Perry and David Boies, said their aim was to have gays and lesbians join marriage, not change it. Photo by Monica Jensen/SF Public Press.

UPDATED 2:50 p.m. PDT
READ THE COMPLETE RULING (PDF)
U.S. District Judge Vaughn R. Walker has overturned the voter-approved statewide ban on same-sex marriage. But it is unlikely to be the last word. Just minutes after the ruling, a stay was issued that halted gay marriages and disappointed crowds of gay activists gathered at San Francisco City Hall.

Walker ruled that Proposition 8 of 2008, the voter initiative that stopped gay marriage months after it began, violated the 14th Amendment to the Constitution. He wrote that Proposition 8 “disadvantages gays and lesbians without any rational justification.”

“A private  moral view that same-sex couples are inferior to opposite-sex couples is not a proper basis for legislation,” he wrote.

Not long after the ruling, a few hundred people headed from outside the Philip Burton federal courthouse to City Hall a block away, where advocates for gay marriage were hoping to see a resumption of same-sex marriages. They were singing, “Going to the chapel and we’re gonna get married.”

KALW News reported that the San Francisco assessor’s office would not be issuing same-sex marriage licenses Tuesday. The San Jose Mercury News reported Wednesday that they had filed a motion to stay the ruling pending an appeal.

Nonetheless, a crowd gathered at the top of the stairs in City Hall. No proponents of Proposition 8 could be seen.

It’s long been expected that whichever side lost this ruling would appeal to the U.S. Supreme Court. And any Supreme Court decision on the marriage ban, approved in 2008 as Proposition 8 could still be years away, said Ted Olson, one of two lead attorneys opposing the ban, following closing arguments in the case.

The arguments back and forth within the courtroom took on very different issues from the ones that voters wrestled with in 2008. Indeed, David Fleischer, a gay rights activist with the Lesbian, Gay, Bisexual and Transgender Mentoring Project in Los Angeles, said in a recently released report that many voters were misled by anti-gay-marriage television ads.

Prior to closing arguments, each side responded to questions from Walker. Olson and colleague David Boies framed the case as a civil rights issue, one in which the voters of California and the state had taken away a constitutionally protected right of same-sex couples to marry.

Charles Cooper, representing proponents of the measure, framed the case as one in which the plaintiffs were attempting to override the will of the people on a proposition that is a matter of the state constitution and should not be decided in a federal courtroom.

Olson — representing plaintiffs Kristin Perry, Sandra Stier, Paul Katami and Jeff Zarrillo — began his closing arguments speaking about the harm and humiliation they experienced by being treated differently from the heterosexual majority.

“Their state has rewritten its constitution in order to place them into a special disfavored category, where their most intimate personal relationships are not valid, not recognized, and second rate,” Olson said. “Their state has stigmatized them as unworthy of marriage, different and less respected.”

Olson stressed that his clients did not want to deinstitutionalize marriage, but rather to participate in it. He said the evidence presented by both sides in the case established that allowing same-sex couples to marry would improve the stability and wellbeing of their families, the state and the institution of marriage.

Cooper, on the pro-ban side, argued that marriage has always been a union between a man and a woman, ensuring the survival of the species and channeling sexual urges into stable, enduring relationships that promote the goal of having both biological parents raise the offspring they produce.

“The right to marry is bound up with and proceeds from the fundamental nature and its fundamental purpose relating to procreation and the existence and survival of — of the human race,” he said.

He referred to the testimony of David Blankenhorn, author of a book called “Fatherless America,” for evidence. Blankenhorn, founder and president of the Institute of American Values, was the sole witness whose evidence and testimony remained for the defense. Counsel for the couples fighting Proposition 8 had originally objected to him as an expert witness, but eventually withdrew the objection.

Blankenhorn’s testimony turned out to be, as Walker put it “somewhat equivocal,” and Olson used that to bolster his argument, showing a clip of Blankenhorn saying on the stand: “I do believe it is almost certainly true that gay and lesbian couples and their children would benefit by having gay marriage.”

Olson said he counted 14 Supreme Court decisions which established precedence for ruling in favor of the plaintiffs. He said it would be a matter of interpreting, not changing, the Constitution to restore the right for same-sex couples to marry. Among the rulings he cited was Loving v. Virginia, which overturned that state’s law against interracial marriage in 1967.

Olson concluded his closing argument by using Blankenhorn’s own words: "Gay marriage would be a victory for the worthy ideas of tolerance and inclusion. It would likely decrease the number of those in society who tend to be viewed warily as ‘other’ and increase the number who are accepted as part of ‘us.’ In that respect, gay marriage would be a victory for, and another key expansion of, the American idea.”

Cooper sought to establish that the opposite-sex aspect of marriage is a definitional one, and specifically so in legal terms.

“Indeed, when the Massachusetts Supreme Judicial Court made Massachusetts the first state to legalize same-sex marriage in 2004, it acknowledged that its ruling, and I’m quoting, ‘Changed the definition of marriage as it had been inherited from the common law and understood by many societies for centuries,’” he said.