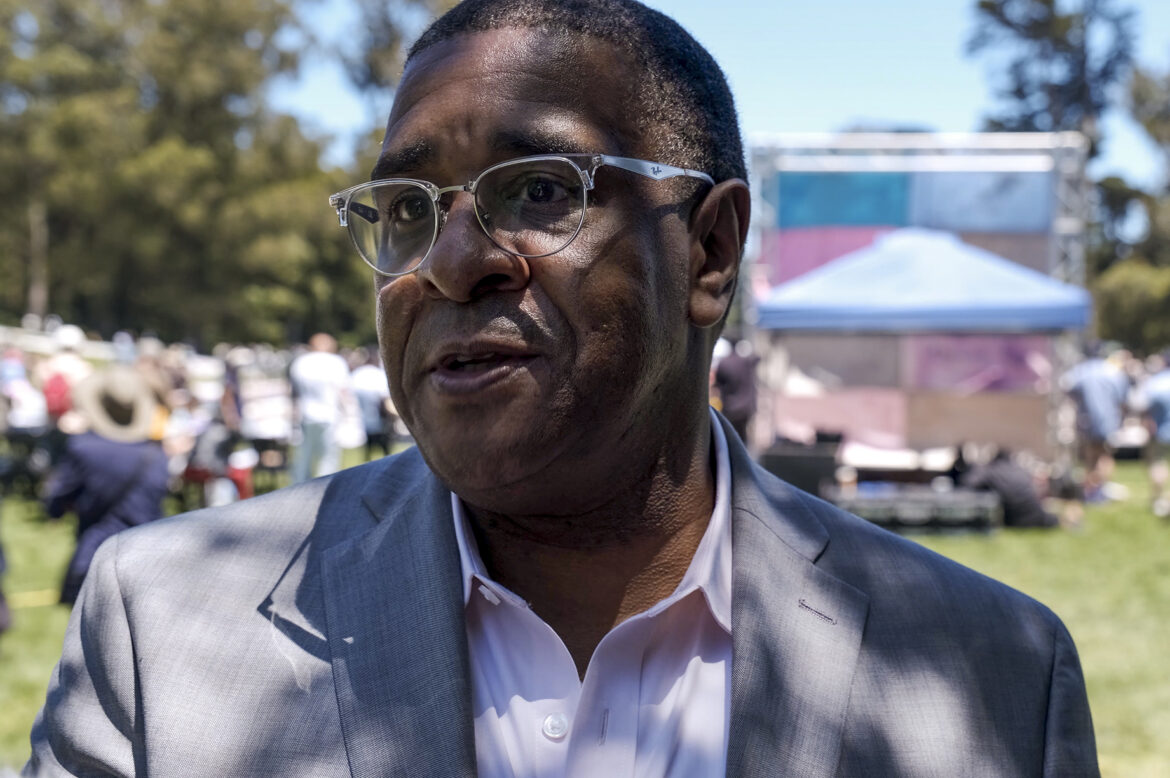 After two years of focusing on COVID-19 pandemic response, the Biden administration is renewing attention to other ongoing public health challenges, including HIV and AIDS.

The response is led by Harold Phillips, director of the White House Office of National AIDS Policy, who is a long-term survivor of the virus — defined as someone infected before the HIV drug cocktail deployed in the mid 1990s made it possible for most people to live with HIV as a chronic disease.

The San Francisco Public Press spoke with Phillips this month when he came to San Francisco to participate in events tied to the display of the AIDS Memorial Quilt in Golden Gate Park.

The following interview has been lightly edited for length and clarity.

Mel Baker: In San Francisco during the COVID pandemic, we backed off on our HIV care, both prevention and services for those with HIV. (Learn more from this recent “Civic” episode: “While SF Fought COVID, HIV Prevention Stalled.”) Is that something that the administration is noticing around the country? And is there a policy plan to deal with that?

Harold Phillips: Yes, we’ve noticed that a lot. Some, because of our already strained public health system, during the pandemic. So, they stopped some of the HIV work. We’ve seen decreases in the number of HIV tests conducted across the United States. We also saw people fall out of HIV care, including some of our long-term survivors. With social distancing, a lot of services had to move to telehealth, which didn’t necessarily work for everybody. If you’re in a rural area where you got poor internet service, that didn’t work too well either.

One of the things that President Biden has done is called for us to accelerate our HIV efforts. He released a new national HIV/AIDS strategy on World AIDS Day last year.

We are also linking to our prevention options, which — we’ve got a number of them — including long-acting injectables, and PrEP for those who are at risk, but not HIV positive. (Editor’s note: PrEP stands for “pre-exposure prophylaxis,” in which an HIV drug used for treating the virus is given to someone who isn’t infected to prevent them from becoming HIV positive. With no effective vaccine against HIV infection, PrEP is the most effective way to prevent new infections, especially when combined with safer sex practices.)

We’re hoping to refocus the conversation and our efforts around HIV. COVID is here for a while. So, we’re learning to live with it, and living with it means we’ve got to also focus on HIV and other sexually transmitted infections.

Baker: Regarding injectables: They’re very expensive. Is there an administration policy to make sure that things like Medicare pay for these drugs and an effort to push states to make sure their Medicaid programs cover them, especially for people that have difficulty maintaining a daily pill regimen? (Editor’s note: Injectables are new HIV drugs that can be injected into a person’s muscle tissue, which allows them to be slowly released into the bloodstream over a matter of weeks, eliminating the need for daily pills.)

Phillips: Absolutely. Working with Medicaid, Medicare, as well as working with private insurance covering the cost of long acting injectables, and changing our policies. President Biden, in the fiscal year ’23 budget request, has called for a national PrEP program, especially for those uninsured and underinsured. We will not only be covering the medications, including injectables, but also covering services for those that need to access PrEP, need to become more aware of PrEP, and also reminders, patient navigators to help keep people on PrEP, transportation services for those who need help and assistance getting to the clinic.

This July we acknowledge 10 years of having PrEP as an HIV prevention tool. And we’re still working on programs that help people really become aware of PrEP, and maintain access to the medications.

Baker: What about programs for research and such? You know, we’ve always heard that we’re “just 10 years away from a cure” for three decades now. Is there any extra money being put into research that might cure those infected?

Phillips: Yes. The NIH (National Institutes of Health) is continuing to do work on a cure and a vaccine. I think it’s been at least documented and well known that our ability to find the COVID-19 vaccine is a result of decades of HIV research toward a vaccine. So, now that we’ve sort of got COVID-19 vaccines under way, our research scientists involved in vaccine research for HIV have also learned a lot from that sort of effort. And now they’re turning their attention and refocusing our efforts for an HIV vaccine and also a vaccine cure.

Dr. Fauci talks about this as well. It’s still hopeful that we can get there, we’re learning so much. Our medications are much better than they were 35 years ago as we sort of commemorate the anniversary of the quilt today. We’ve come so far. And they’re continuing to work with a lot of the AIDS research that’s going on as well. And there are additional investments on the federal government’s part in that too. (Editor’s note: Dr. Anthony Fauci, who prominently guided national response to the COVID-19 pandemic, has long been a key figure in HIV and AIDS policymaking as director of the NIH’s National Institute of Allergy and Infectious Diseases — a position he has held since 1984.)

Baker: One of the most difficult things to get out of Congress is federal funding to help other countries with HIV care and prevention. How has the Biden Administration continued that effort that began during George W. Bush’s administration? (Editor’s note: According to HIV.gov, in 2020, there were 20.6 million people with HIV in Eastern and Southern Africa, 5.7 million in Asia and the Pacific, 4.7 million in Western and Central Africa, and 2.2 million in Western and Central Europe and North America.)

Phillips: Absolutely. President Biden has pledged his continued support for our PEPFAR program — the President’s Emergency Plan for AIDS Relief. Our first lady, just about a month ago, announced the historic investment in HIV care, treatment and prevention for the country of Panama. Our new global AIDS ambassador has just started work. So, we’re really excited to have him on board, that will also continue to work.

Currently, under PEPFAR, we’ve got 21 countries across the world — some in Africa, some in Asia — that have reached epidemic control. And that means that 90% of the people with diagnosed HIV in those countries are virally suppressed — meaning they can’t pass it on to their sexual partners. So, with 21 countries already around the world who have reached epidemic control — here in the United States we’re at 67%, so we’ve got a lot of work to do. But I think the lessons learned from some of those other countries is that we can do it. It can be done. It’s achievable. And I’m very hopeful that the United States will get there.

Baker: It seems the injectables will be the next stage in trying to do that, since people can go as much as two months between an injection.

Phillips: Yeah. And the pharmaceutical companies as well as our researchers are looking at, how do you extend that? So, right now we’re at sort of four to six weeks, they’re looking at even longer, including once a year. So, that’s going to be another tool that helps us get there, both for those living with HIV and those that are at risk of infection.

Baker: The majority of HIV patients in the United States are 50 years and older. Is there enough funding to make sure that people that didn’t have enough resources to prepare for retirement are going to be able to get a little extra care?

Phillips: So, this is something that we’re looking at. Our new national strategy talks about those who are over 50, as well as elderly living with HIV. I think we’re still figuring out what that all means, and what sort of services will individuals need that are different. And how do we do that?

It’s going to take a “whole of government” effort to look at this. Luckily, the Administration for Community Living, which handles senior services in America, are on board and have mandated that people living with HIV be included in state aging plans. So, that’s the first step to really look at and better understand: What are the resources that are needed at the community level, for people who are aging with HIV? We’re also looking at quality of life for people living with HIV. And we know the definition of quality-of-life changes as one ages. So, things like social isolation, housing status, employment status, physical abilities. Also, how do we measure all of that, in addition to clinical and medical well-being, which we’ve been doing for a while.

It’s a point in the history of the epidemic in our country that I don’t think we really thought about 40 years ago. I think we’ve got a lot of work to do, including training our medical professionals on how to take care of people living with HIV who are over 50 — things like bone density frailty assessments. Also, in services so that we can still be our authentic selves as we age and maybe go into a senior living facility. Something to celebrate living with HIV and reaching these milestones.

Baker: Why did you come out to see the AIDS quilt? Why was it important to have a representative of the administration here?

Phillips: The AIDS quilt plays an important part in our history of HIV for this country. It is a symbol of both those that we have lost and loved. But it’s also a symbol of hope. And it’s got an incredible power to unite us and bring us together to hear the stories of those we’ve lost. And to remember them is important, because it also helps to break down stigma. Part of what President Biden has called for is that we addressed HIV stigma and HIV criminalization, which still exists in a number of states. So, it was really important to be here to represent Washington D.C., represent the Executive Office of the President, and also people living with HIV.