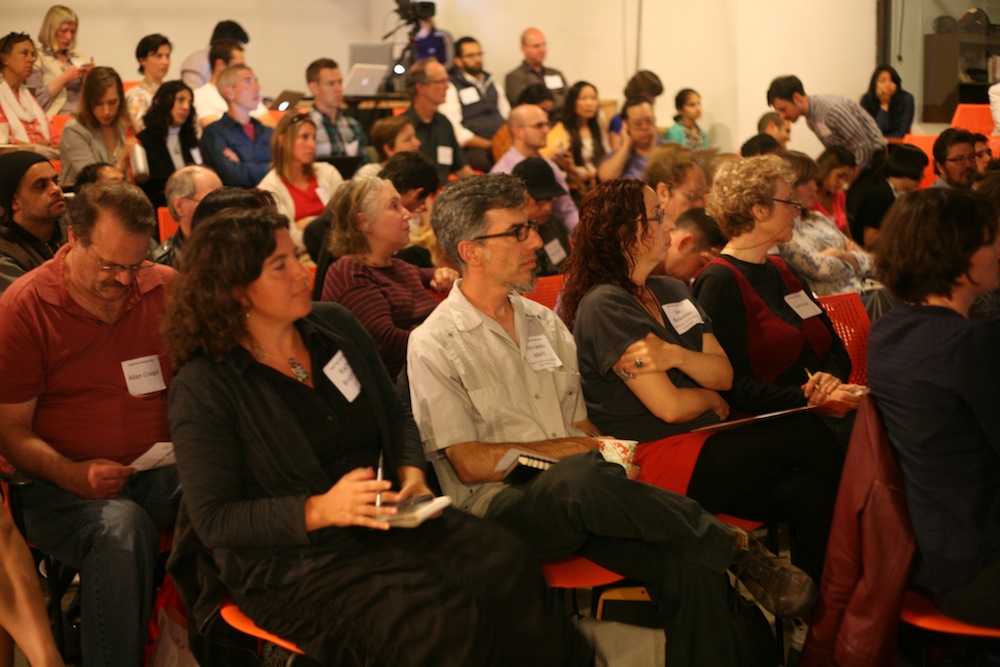 Liz Enochs, Board Member and

San Francisco has become the epicenter of the Bay Area’s affordability crisis, with high-tech corporations moving in, rents climbing skyward, and despair and evictions sweeping through long-established but lower-income communities.

Yet for the sold-out crowd of 140 housing-policy visionaries, advocates, experts and activists at Hack the Housing Crisis, San Francisco’s struggle to house its citizens is an opportunity to build a better city for all.

Hosted by the San Francisco Public Press and Shareable Magazine, Hack the Housing Crisis got off with a buzzy, bustling set of rapid-fire presentations on opportune innovations that could transform the struggle for housing in the Bay Area. What follows is a sampling of ideas from the presenters.

San Francisco needs to join with other Bay Area communities and tackle the housing affordability crisis as a regional problem, said Corey Cook, an Associate Professor of Politics at the University of San Francisco. “Any time that someone says that this is a simple problem with a simple solution — it’s not,” Cook said. “There are multiple housing crises, not just one.”

Housing affordability problems in San Francisco result in part from underproduction of housing by other Bay Area cities, such as those in Marin and Santa Clara counties, he said. A major factor contributing to that underproduction is California’s property-tax system, which has incentivized the construction of retail and office spaces over housing.

To ease the housing pressure on San Francisco, other area communities should respond by building more affordable housing, he said.

More than 3,600 San Franciscans were served with eviction notices last year, yet very few of them had access to lawyers, said San Francisco Public Defender Jeff Adachi. While only 10 percent of tenants had lawyers to defend them in eviction lawsuits, about 90 percent of landlords had legal representation.

Tenants who have legal representation are five to 10 times more likely to stay in their homes than those who don’t, studies show. Adachi proposed city funding for more eviction-defense attorneys, reaching out to attorneys who might be able to provide legal assistance and the creation of an effective information network for tenants facing eviction.

It also takes 50-75 percent less time to build than traditional on-site building and uses an assembly-line infrastructure that decreases labor costs. As a result, factory-built housing is able to stabilize budgets and schedules earlier in the process.

Making more data available to citizens and policymakers could help them identify problems and generate innovative solutions, said Andrew Hyder, Developer Relations Engineer at Code for America. Hyder cited the barriers to civic participation created by disorganized and confusing public-information systems and emphasized the role of public records in helping to draw attention to areas like crime, campaign finance, and most topically, housing.

San Francisco came in first among American cities in promoting public access to these sources of data, according to a Code for America poll. These new sources of  information could allow tenants and owners to make more informed decisions about potential housing by informing them of possible hazards like a previously condemned property or an abusive landlord.

Houselets founder Tim McCormick touted a design solution that turns urban “empty space” like parking spots and driveways into small prefabricated homes. McCormick says he was inspired by “parklets,” the tiny neighborhood parks that have sprung up in underused urban spaces.

The popularity of solo and off-grid living combined with construction-technology improvements came together in houselets, he said. Small, modular housing could be prefabricated and moved cheaply, drastically lowering construction costs, which are among the largest fixed-cost hurdles to affordable housing, according to McCormick. The troubled housing market requires a response that’s radical, such as his designs, he added.

Cohousing California’s Betsy Morris started her session by encouraging the audience to stand up, stretch and yell.

The Bay Area’s depressed job market has increased demand for affordable housing, yet funding for affordable units is scarce, Morris said. In her view, residents must reevaluate previously held notions about what housing should look like. For Morris, this new form of affordable housing is at the nexus of cooperative housing, shared funding and greater community engagement. Her co-living proposal calls for a type of collaborative housing in which residents typically live in separate units, but share some common space, such as a communal kitchen, community room or garden.

The shared-space thesis echoed other community-housing ideas voiced at the forum, including the use of community-land trusts and cooperatively owned property.

You’d have to earn at least $37.62 per hour to afford an apartment in San Francisco at the fair-market rent established by the U.S. Department of Housing and Urban Development (HUD), according to Ophelia Basgal of the federal Department of Housing and Urban Development. Yet that “fair market rent,” at $1,956, is more than 40 percent lower than the current median price of $3,450 for a two-bedroom apartment. No surprise, therefore, that this city has the second-highest rate of homelessness in the region.

Permanent, subsidized, supportive housing is a proven solution for lower-income residents and individuals struggling with homelessness, said Basgal. Services such as mental-health treatments and communal space can also create a vital, strong sense of community and belonging. She cited the 150 Otis housing project — funded by state bond measures for low-income homeless veterans — as a great example of housing that helps mitigate the extreme income inequality in San Francisco.

Fund and Build Affordable Housing, Because the Market Won’t

San Francisco must require by law that at least 30 percent of all housing built in the city is affordable to people who earn the median income or below, said Fernando Marti, co-director at the Council of Community Housing Organizations. The city’s median income is about $97,000 a year, according to Basgal.

Marti said the city needs to create an acquisition fund to secure land and buildings for affordable housing before speculators bid up the prices. In addition, the 30 percent affordable-housing requirement would lead to the creation of many more affordable units than the market would build on its own.

“People told me it is crazy,” said Marti, but “the goal is achievable, and has been done in the past.”

California could redirect 20 to 25 percent of its annual cap-and-trade revenue to building new affordable housing near major transit areas, said Peggy Jen, senior program officer for the Bay Area office of the Local Initiatives Support Corporation. Bay Area cities would probably follow the guidelines of Plan Bay Area — a multi-decade urban planning agenda from the Association of Bay Area Governments — to figure out where to build that housing. The state-level Conference Committee on Sunday will conduct the first round of votes for legislation that would allow funds to be redirected in this way, Jen said. More info at www.housingca.org.

Build Backyard Cottages Across the City

San Francisco should allow its homeowners to build more backyard cottages, said Kevin Casey, founder and CEO of New Avenue Homes, which manages and coordinates cottage construction in multiple Bay Area cities. The San Francisco Public Press recently published a story on backyard cottages, describing how the city could ease regulations to encourage this type of construction. Because cottages use existing property, Casey said they could be an easy way for the city to “densify” its housing — compared to new construction, which is more difficult, expensive and time-consuming. He said that cottages are catching on in many other cities: “Boom or bust, people want this kind of house,” he said.

Bring Residents on Board to Plan Neighborhood Changes

Building new affordable housing in San Francisco could require residents to change their neighborhoods more than they care to, even with good community-engagement processes.

AnMarie Rodgers and Kearstin Dischinger of the San Francisco Planning Department said rezoning and increasing height limits could increase affordable housing, though they acknowledged it would be a hard sell in established neighborhoods. They cited the Octavia Market Area Plan as an example of successful community-consensus building — yet when Manu Koenig, CEO and founder of Civinomics.com said from the audience that rezoning the city’s Sunset and Richmond districts is “the most obvious solution,” Rodgers replied that rezoning those western neighborhoods is not politically feasible.

Yi Zhang, Social Innovation Director at Volunteers in Asia at Stanford, discussed “design thinking” as a less policy-oriented approach that could facilitate conversation about the contentious topics of housing in San Francisco.

This strategy is particularly useful when trying to bring together groups like landlords and tenants that are often seen as diametrically opposed. In order to come up with a constructive outcome, Zhang said, interested groups should approach each other with curiosity and an open mind instead of preconceived notions and assumptions.

Institute a Progressive Tax on Incomes Above the Area Median

A journalist by trade, Lyndal Cairns now consults with several Bay Area nonprofits in communications strategy and business development. She blogs about media, technology and sustainability at LyndalCairns.com

Journalist and editor Josh Wilson came to San Francisco to stay in 1992. He covers people, places and public affairs, which are in no short supply. Tweet him via @MrJoshuaWilson.