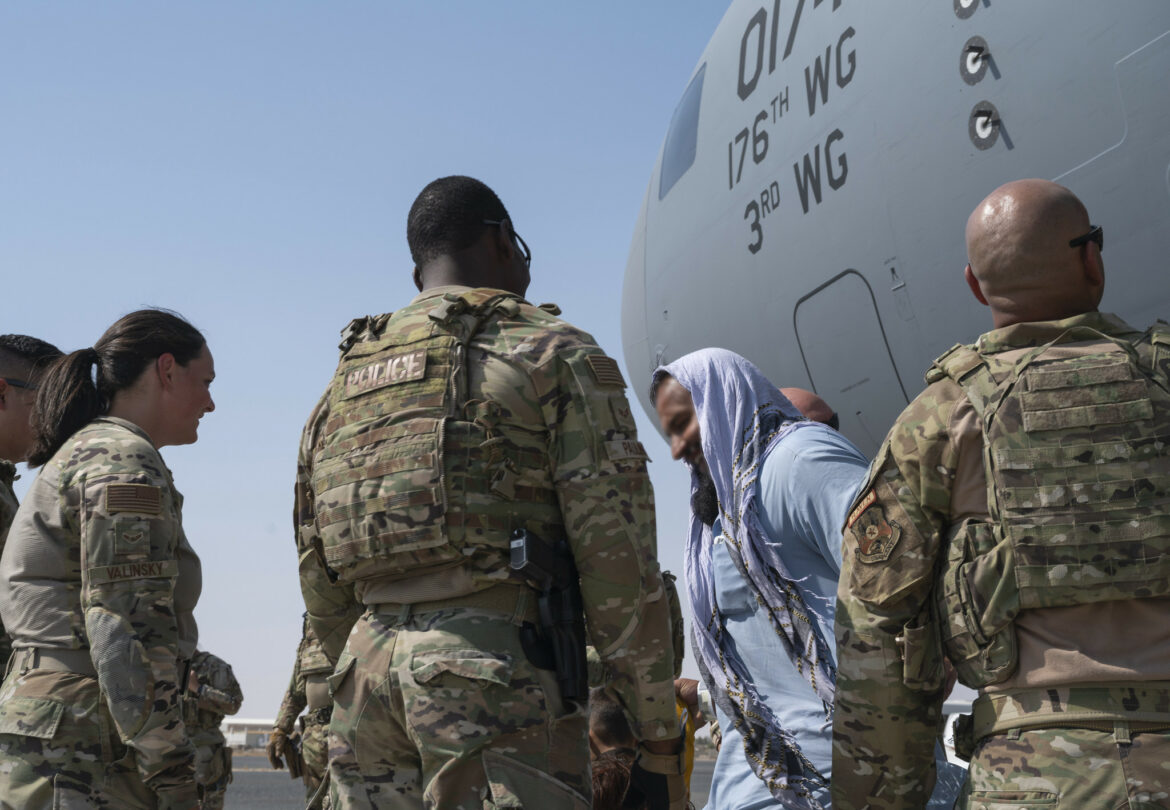 Evacuees from Afghanistan arrive at Ali Al Salem Air Base, Kuwait, on an aircraft crewed by Air National Guard members on Aug. 23, 2021.

Update, Aug. 25 & 26: This story has been updated with additional aid group references and links.

Farhad Yousafzai, who came to the United States in 2014 on a Special Immigrant Visa and has worked with refugee organizations since then, said refugees are arriving in the Bay Area from Afghanistan in dire need of everything — a place to stay, a shower, health care, a change of clothes for the first time in 10 days.

“You name it, and they need it,” Yousafzai said. “They are in extreme shock.”

Yousafzai works as an insurance agent in Sacramento, but he has a long history working with refugees and serves on the board of the Burma Refugee Family Network. In an interview with “Civic,” he said the organization is figuring out how to continue sheltering a family staying in a San Francisco hotel.

Thousands are fleeing Afghanistan in fear of violent reprisals from the Taliban, which captured the nation in a matter of days after the U.S. began withdrawing its troops. The US is aiming to completely withdraw from Afghanistan on August 31, President Biden has said. After the Taliban took over the government, mass evacuations began. As of Wednesday more than 82,000 people had been airlifted out since Aug. 14. But thousands more are waiting at the airport in Kabul.

Yousafzai’s own visa had been granted years before because of his work with the U.S. military in Afghanistan, allowing him to resettle in California. But his siblings remained. Just recently he was able to help relocate two brothers and his mother to Turkey, but his sisters, cousins and uncles are still in Afghanistan. Getting people out has been a bureaucratic nightmare, he said, with much of the advice available simply sending him in circles.

“I asked one congressman for help. He sent me the same link that I already had,” Yousafzai said.

Locals who want to support new arrivals should connect with refugee organizations in their counties, Yousafzai said, or reach out to Afghans Living in the San Francisco Bay Area, a Facebook group he helped start. The Burma Refugee Family Network recommends finding local aid groups through regional Refugee, Asylee and Immigrant Forums. These forums coordinate refugee nonprofit organizations in San Francisco, Santa Clara County, and the East Bay. The East Bay forum has developed a form for individuals and organizations to express interest in assisting with a coordinated response to support Afghan arrivals.

Yousafzai also called on any Americans who have worked in Afghanistan to make an effort to reach out to their former Afghan colleagues or subordinates, as visas often require a statement from a former supervisor to be granted.

“Afghan subordinate staff cannot get visas and nobody can help them without a recommendation or human resources, HR, letter,” he said.