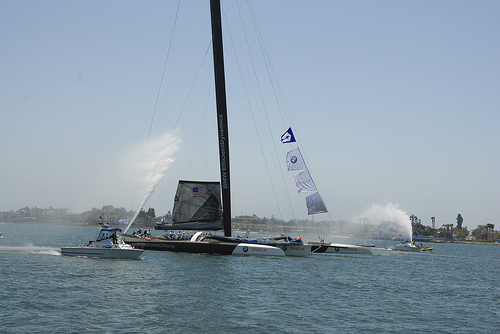 Creative Commons photo courtesy of the Port of San Diego.

The America’s Cup races are two years away, but San Francisco is already bracing for the massive crowds and construction that will accompany the international sailing competition.

Among the first items of business is raising $32 million in private funds to pay for police, transportation, and other public services so that public coffers aren’t touched.

And a sped-up environmental review of the plans has recently launched in an effort to lessen the impact on the San Francisco Bay and shoreline, while not getting in the way of a tight timeline. So far, environmental groups are optimistic that such a goal can be achieved. They’ve banded together in a group of about a dozen to review the city’s plans and coordinate responses.
“I think we feel very uneasy but I think we’ve committed to helping to make this process work,” said Jennifer Clary, president of San Francisco Tomorrow.
Although the event plans are still vague, environmental groups have started identifying ways in which the races may harm water quality and wildlife, if not properly mitigated. A number of the spectator viewing areas align sensitive wildlife habitat, such as Crissy Field, the Marin Headlands, Angel Island, and Yerba Buena Island.
“The fact of the matter is people will go where people can see. You’re not going to have enough stands to accommodate the tens of thousands of people who come in,” Clary said. “We know that people gather where they can and nothing is sacred.”
To that end, the environmental groups may suggest the games be heavily staffed with monitors who will corral the crowds away from habitat areas, the construction of barriers, and good signage.
In the water, boat traffic is also a concern. Deb Self, the executive director of San Francisco Baykeeper, said recreational boaters, who will be allowed in certain areas on the bay during the races, could harm water quality if sewage outputs are not properly in place.
She also expects boatyards to see an uptick in business as boaters spruce up their beauties before they set sail. But the paint that’s scraped off is often copper-based to keep barnacles and grasses from growing on the hull and is toxic to wildlife.
“Most boatyards are on the edge because of the economy,” Self said. “They don’t have the money to invest in a big, $300,000 [water] treatment system.”
She said the city could offer a low cost loan program to help boatyards make the investment in water quality infrastructure.
The sewage system is also a problem along the Embarcadero, which is owned by the Port of San Francisco. If not upgraded to handle the extra load from the games, raw sewage could be flushed into the Bay, said Self.
Although the 2013 summer races will take place outside the height of migratory bird season, more boat traffic on the bay could disturb birds as they raft and forage, said Mike Lynes, conservation director for Golden Gate Audubon Society.
Construction of shoreline facilities could also impair water quality, while concrete spillage during pier construction or demolition could cover up sensitive foraging habitat at the bottom of the bay.
“They’re doing a lot of construction on the waterfront and disturbing soils. Some of those soils might be contaminated, so what does that mean?” Lynes said.
Oracle founder Larry Ellison chose San Francisco as the site of the next America’s Cup in late December, following the Oracle Team’s capture of the trophy earlier in the year, marking the first time a U.S. city stages the international sailing competition in almost two decades. Then-San Francisco Mayor Gavin Newsom negotiated a development deal with Ellison that allows the Oracle Team to invest $80 million in renovating city-managed piers in exchange for 66-year to 75-year leases on the the piers in the South of Market district.
Newsom upset many in the environmental community by initially proposing that the environmental review process be skipped in the interest of avoiding the obstacles of a prolonged governmental approval process. Preliminary races are scheduled to begin next year.
Following an outcry by environmental groups, a compromise deal was struck for an expedited environmental review. Officials have set a March 11 deadline for public comment and plan to have the final environmental review signed by the end of this year. Two public meetings on the project’s scoping plan were held last week.
Environmental groups say they wish the scoping plan had more details, but are nevertheless cooperating with the city to meet its deadlines. Some say the races could also be a positive influence on the San Francisco Bay.
“I and all the other groups believe it can be done right and believe the city wants it to be done right,” said Self. “We really want to showcase this amazing place we live in and … our environmental values.”