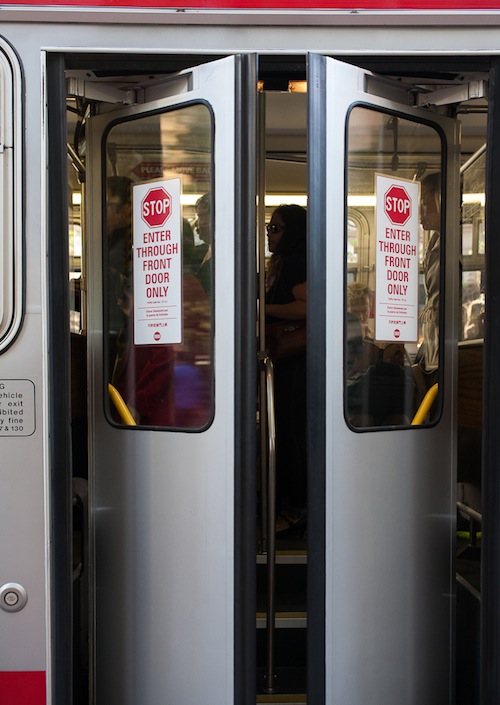 Five of Muni's busiest routes have seen a decrease in the time spent loading passengers at bus stops since the transit agency's all-door boarding policy went into effect in July. Photo by Jason Winshell/SF Public Press

Muni’s all-door boarding policy that went into effect July 1 appears to be working – although riders on at least one line are complaining about everyone not lining up at the front.

A transit agency report found that passengers spent less time waiting at bus stops for riders to board while use of  the back door became more frequent. The agency timed bus loading at stops with 10 or more passengers waiting to board.

The 1-California saw an average decline of about six seconds at bus stops that had 10 or more passengers boarding. If this were to hold true for at least 20 of the 1-California’s bus stops east of Van Ness Avenue, riders could save as much as two minutes of traveling time from home to work,  said Muni spokesman Paul Rose.

The 1-California saw a 116 percent increase in riders using the back door compared to the same time last year when it was illegal for passengers to board the back of Muni buses.

Roughly 10 percent of riders would board the back of the bus last year, but now up to 40 percent are using the back doors, Rose said.

The 1AX-California, an express bus from the Richmond District to downtown, saw a whopping 1,186 percent increase of riders using the back door. Traditionally, express bus riders lined up at the bus stops to board the front door, but the new policy has changed all that.

Riders on the 1AX have complained to Muni that queuing in front of the bus has become more difficult now that riders are able to board at the back of the bus. Those who wait in the line at the front of the bus are finding that seats are full by the time they board.

The 1AX saw a six second decrease in boarding times at two of its stops in the downtown area.

The 14 and 49 Muni lines saw little change in boarding times, but did see increases in riders boarding through back of the bus.

The 38-Geary, which has a weekday average ridership of 25,000, saved more than a minute during the commute home.

“When we look at situations where large numbers of passengers are boarding a vehicle, the preliminary numbers suggest that the policy is working,” Rose said.

Muni has received 58 complaints since the new policy went into effect. More than half of the complaints were about drivers not opening the back doors. Most of the rest were from express bus riders.

Muni officials plan to also look at revenue and entire route times of its buses as more information becomes available. They have claimed that the all-boarding policy could generate more revenue for the transit agency.