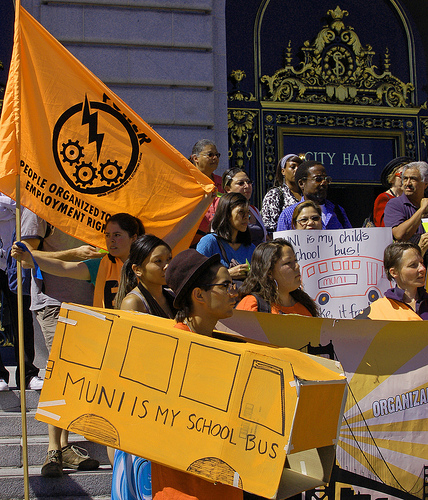 Advocates of free Muni Fast Passes for the city’s 40,000 low-income youth are a step closer to seeing their dream realized.

City transit director Ed Reiskin on Monday recommended that the Municipal Transportation Agency spend $1.6 million for a 12-month pilot program for free Fast Passes for low-income youth between the ages of 5 to 17, and $5.1 million to rehabilitate light-rail vehicles. The money comes from $6.7 million in extra federal funds from the regional Metropolitan Transportation agency.

Supervisor Scott Wiener has been adamant that the transit agency spend the regional funds on upgrading Muni’s aging system and purchasing new vehicles. Wiener waged much of his fight via social media, including Twitter and Facebook.

On Monday, Wiener said at a Board of Supervisors committee hearing that Muni service has been deteriorating. “For decades, we as a city have severely underinvested in Muni. There’s always a reason for diverting money away from Muni,” he said.

Wiener pointed to recent dismal on-time performance numbers. A report from the transportation agency said Muni was on time on just 59 percent of its runs in October, which falls far below the 1999 voter-mandated goal of 85 percent.

Reiskin said the transit agency has been working hard to improve Muni’s aging fleet of buses and trains, including  purchasing 62 new hybrid vehicles and rehabilitating 80 older buses. He also said the agency is working on reducing driver absenteeism and is training new ones. A new class of operators will graduate in January, he said, which could help with the on-time performance goals.

Parents and youth advocates have been fighting for a free Fast Pass program for most of the year. The city’s transportation agency approved a 22-month pilot program in April, but only if $4 million could be found from regional transit funds.

Regional transportation commissioner rejected the proposal in July, which left the project in limbo.

“We are really excited that they’re moving forward with the pilot program. It’s taken a really long time to get there,” said Jaron Browne of People Organized to Win Employment Rights. The organization has been leading the way in support free Muni Fast Passes for low-income youth.

Eric Williams, president of the Transport Workers Union Local 250-A, which represents Muni operators, said he does not think it is the right time to fund free Muni passes youth.

“The system is just in disrepair,” Williams said. “With an $850 million budget, no way should this system be in this manner.”

Eric Wu, who graduated from George Washington High School last June, and will not qualify for a free Fast Pass because of his age, still supports the program.

“The fast passes are definitely a burden to many families. Many youth cannot afford it. They have to resort to going on the back of bus and risk being fined doing so,” Wu said.

The transportation agency’s board of directors will make the final decision how to spend the funds at its Dec. 4 meeting.