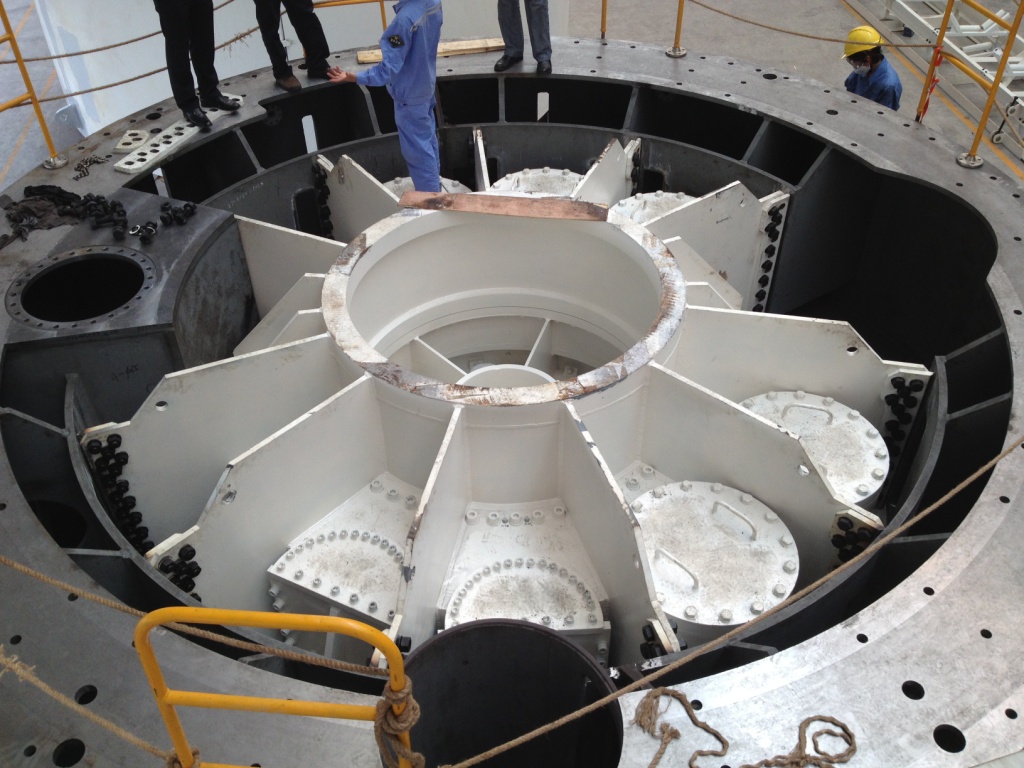 Assembly continues on two boring machines which will be used to create the tunnels for Muni's Central Subway. Photo courtesy of SFMTA

The proposal to pull out tunnel-digging machines in North Beach has spurred debate about the prospect of building additional stations to extend the Central Subway project north of Chinatown. But transit officials say that’s not in the current plans, and such a move would take years more planning.

Building a North Beach station would require new sources for funding construction, planning and design, said John Funghi, project program director for the subway line. The current Central Subway line is scheduled to open in 2019, with stations stretching from the Caltrain terminal in South of Market to Chinatown.

The prospect of new stops emerged when the San Francisco Municipal Transportation Agency floated the idea of pulling the massive tunnel-boring machines out of the ground at the site of the derelict Pagoda Palace Theater in North Beach, which the agency’s board of directors voted on Tuesday to study.

Angry North Beach neighborhood activists and merchants have said for months that the other plan — shutting two lanes of busy Columbus Avenue for nine months — would be too disruptive.

The $1.6 billion project has long included plans to tear up Columbus, where workers would build a shaft to retrieve the machines. Neighborhood reactions forced the transit agency to seek a new solution.

Removing the machines at the theater site on Powell Street and Columbus Avenue would require the transit agency to work fast to secure rights to the site from the owner and to get approvals to demolish the building. It adds about $3 million in cost to the project, not including the cost of purchasing of the theater.

If that plan fails, workers might just leave the boring machines buried under Columbus Avenue, said Ed Reiskin, the city’s transportation director. Doing so would also  delay the project schedule, by two months, and  require the agency to buy the machines from the contractor. Burying the machines will not make any future extension of the line any easier, he said.

The transit agency has a deadline of Feb. 1  to figure out what to do with the machines, or risk serious construction delays, Funghi said.

John Golinger, president of the Telegraph Hill Dwellers neighborhood association, said  the original idea of digging up Columbus for months was unacceptable.

“Unless you delete this language,” he told the board, “I think your attempt to rebuilding trust with the community in North Beach is going to be shooting itself in the foot.”

Golinger suggested that the board “start fresh” with the community. He said the transit agency should communicate better about  construction plans.

Marc Bruno, a North Beach resident and a plaintiff in a lawsuit filed earlier this year to block the project, said he was “elated” about the decision to pursue the Pagoda Palace Theater option, which would not hurt businesses in North Beach.

Bruno said he was thankful that the city had “really gotten the message, for the first time ever, after almost a year of protesting to them about this, that it’s not a rational plan to take things out of the middle of the neighborhood when there’s no subway stop planned in that neighborhood.”