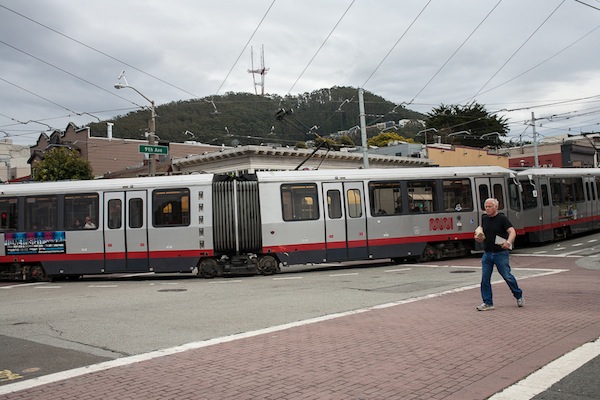 The N-Judah usually gets the most complaints about switchbacks, says a report from the San Francisco Civil Grand Jury. Photo by Jason Winshell / SF Public Press.

You get on a Muni train headed for work in the morning, with five minutes to spare before your employer starts to dock your pay. You squeeze onto a crowded N-Judah and all seems to be going well until … the operator tells everyone to get off just before entering the Market Street tunnel so he can “switch back” on the outbound track to avoid vehicle bunching.

Muni gets points for making its trains meet a theoretical schedule. You, on the other hand, arrive late and get yelled at by your boss.

You’re not the only one who’s frustrated.

San Francisco’s civil grand jury — a kind of officially sanctioned panel of city residents who report on what doesn’t work in county government — recommended on Thursday that Muni officials do away with the practice of switchbacks. That’s when riders are forced off a Muni train before it makes its usual final stop, and heads in the opposite direction to make up for lost time elsewhere.

Muni uses switchbacks during transit delays and traffic jams to help put the whole system back on schedule. John Haley, Muni’s director of operations, said his agency approves switchbacks during non-peak times, and only if there is another vehicle coming within five minutes.

“We recognize that anytime you do a switchback, it has an inconvenience to the riders,” Haley said. “So we do everything we can to minimize that.”

The civil grand jury report said switchbacks were an inconvenience for riders. The report recommends eliminating switchbacks except for accidents, other emergencies or equipment breakdowns.

The panel surveyed other transportation agencies to find out if switching back trains was the common practice that Muni officials claimed. In a comparison that included BART and transit systems in Paris, Boston and Oakland, none used switchbacks to reduce delays except Santa Clara Valley’s. From this research, the report concluded that Muni “expresses a callous disregard for San Francisco passengers.”

Haley disputed the finding that other transit agencies did not use the practice, and disagreed with the basis for some of the comparisons. He said BART does not operate in the same high-traffic, street-level environment that Muni trains must negotiate. He also noted that Boston’s Green Line does switchbacks every day.

The civil grand jury said the transit agency should “effectively use new technology” to solve some of its most chronic problems. On a tour of Muni’s monitoring facility, panel members reported finding it understaffed, with no direct communication with vehicle operators.

Haley countered that the report made no mention of improvements now underway, including staffing changes and a new radio communications system. He added that in six week the NextMuni online prediction system will be upgraded, letting riders with smartphones know when a train is switched back.

This is not the first time Muni officials have gotten heat for the practice of switchbacks. The Board of Supervisors held hearings in 2010 and 2011 because of complaints from riders. Most came from Sunset District residents who said switchbacks came too often on the N-Judah and L-Taraval lines.

“At a time when we’re aggressively reaching out to talk about the things that we are doing and need to do more of, and what are the right kinds of things to improve the service, this report contributes nothing to that dialogue,” Haley said. He said Muni will have a formal response to the grand jury report in the coming weeks.