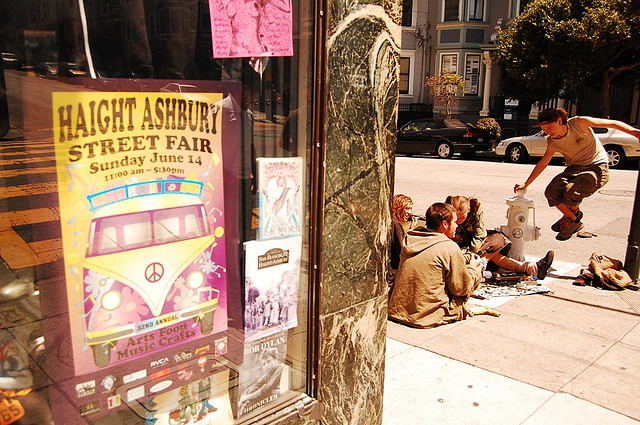 The Haight-Ashbury neighborhood remains the center of a debate about sitting and lying on the sidewalk. A recent study finds most merchants in the area say a local law cracking down on the practice have not seen a big change in their frequent interactions with the homeless. Creative Commons image by Flickr user Jessica Druck.

A majority of retailers surveyed last November in the Haight-Ashbury neighborhood said the enactment of San Francisco’s sit-lie law hasn’t worked as expected: Homeless people still hang out in front of their businesses.

An independent research report commissioned by the city found that 58 percent of the merchants in the district — the focus of a political battle that led to voter approval of the ban in 2010 — say the same number of people or more continue to park themselves on sidewalks. Sixty-one percent said they encountered sidewalk sitters at least three times per week.

City Hall Fellows, a nonpartisan policy research group that trains college graduates for public service careers, was asked by the San Francisco Police Department to study the law’s effectiveness. They surveyed 50 neighborhood merchants, asking them how often people sit or lie on their premises since enforcement began in March 2011.

Sixty percent said the law had no effect in preventing quality-of-life violations, such as aggressive panhandling, soliciting and loitering. Under the law, police must give a warning before ticketing them.

But Booksmith owner Christin Evans, who is also a board member of the Haight-Ashbury Merchants Association, questions how the survey was conducted. She noted that available employees responded to the survey during the weekend.

“The report tries to reflect the merchant perspective,” she said, adding that the researchers did not contact any of the association’s nine board members. “So, I think it’s questionable that they had a representative sample.”

Sometimes sidewalk sitters comply with requests from merchants to move along without police involvement, said Dave McLean, owner of the Alembic Bar and Magnolia Gastropub & Brewery. While he believes the law works on the criminal justice front, it fails to address attendant issues of homelessness.

“The new law may be another tool for the police to assist in these cases but the issues are so complex and extend into so many other arenas that I think it is, overall, of limited utility,” McLean said.

One employee of a nightclub called Milk, at Haight and Stanyan streets, agrees that policing efforts only go so far.

“If the police ask them to get up and move, they’ll move up to the next block,” said the employee, who gave only his first name, Regan. “It’s just a dance.”

Evans said that neighborhood street people have migrated to Alvord Lake by the entrance at Golden Gate Park, where the sit-lie code wouldn’t apply.

But Ted Loewenberg, president of the Haight-Ashbury Improvement Association and a proponent of the ordinance, said he was surprised by such accounts.

“When I go out, people are not sitting on the sidewalk in nearly the numbers as before,” he said. Merchants, he added, “are missing the point, that people were colonizing the sidewalks. We don’t see that anymore.”

Haight-Ashbury, the locus of 1960s counterculture, is now home to a large visibly homeless population. It became a battleground for the sit-lie ballot proposition in the 2010 election. But while the measure garnered approval from 54 percent of the electorate, it won a bare majority of Haight-Ashbury voters.

The neighborhood  is also where the most citations have been issued since the ordinance took effect. The police department’s Park Station, which has jurisdiction over Haight-Ashbury, recorded 152 of the city’s 306 sit-lie violations in its logbook.

The City Hall Fellows also concluded that city courts are ill equipped to process these cases and suggested neighborhood courts as alternatives to traffic court.

They also found that the legally required referrals to social services are inadequate  — the warning notices handed out to those sitting on the sidewalk devote only a half page to the city’s 311 telephone system with no specifics on available services or further instruction on how to access them.

Advocates from the Homeless Youth Alliance said this approach fails to address medical or mental health care needs of their clients, most of them under the age of 24. “Sitting and lying on public sidewalks should not be considered criminal behavior, period,” the alliance said in a press release in response to the survey. “City resources would be better spent strengthening the service system for homeless youth than on the enforcement of homeless criminalization policies like sit-lie.”

But Loewenberg said offering services is secondary to the law’s overarching goal.

“The purpose of this law was not to be a social welfare program,” he said. “The purpose was to let people know it’s no longer acceptable to sit on the sidewalk.”