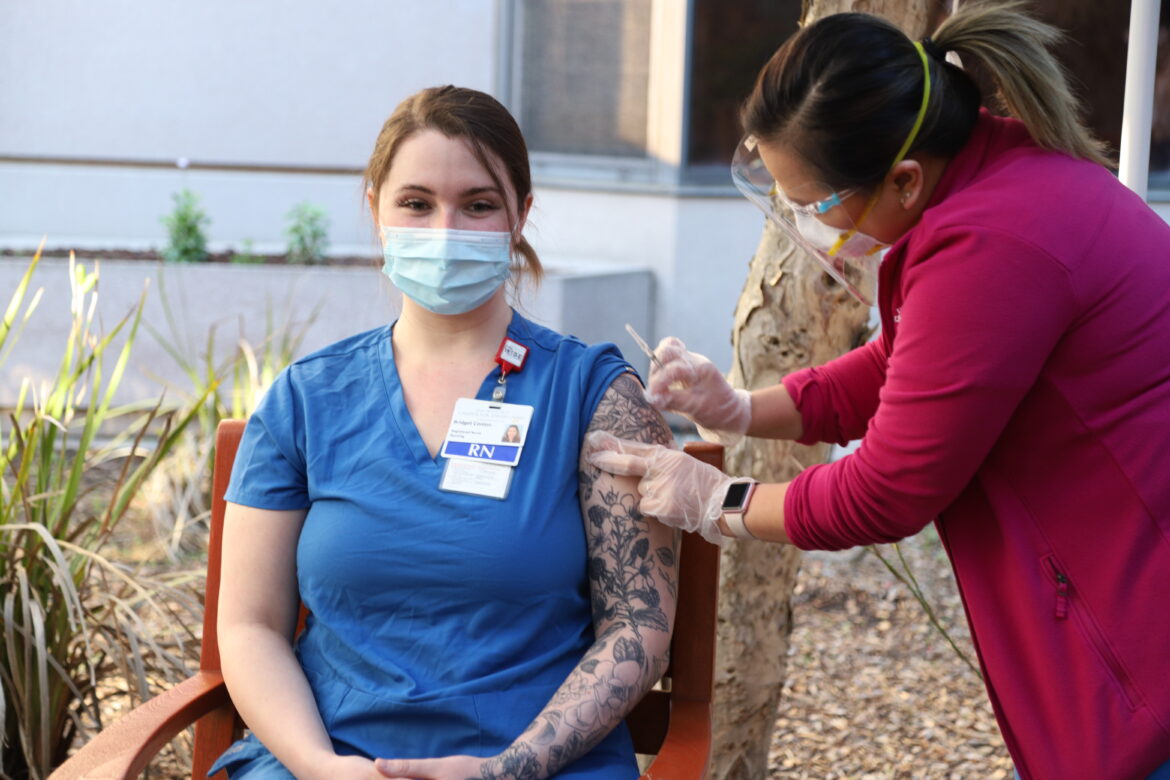 Photo courtesy of the San Francisco Campus for Jewish Living

The vast majority of staff and residents at the San Francisco Campus for Jewish Living, one of the largest nursing homes in the region, have been vaccinated against the coronavirus. 94% of staff and 97% of residents have received the vaccine. The facility’s director of nursing and clinical operations, Peggy Cmiel, told “Civic” about how that was done.

When a vaccine was approved, people in nursing facilities were prioritized to receive it, as those most vulnerable to the virus and to complications from COVID-19. According to data from the New York Times and the Covid Tracking Project from the Atlantic, as of early December, residents and workers in long-term care facilities represented more than 39% of COVID-19 related deaths nationwide.

Staff at the nursing facility were first notified that the vaccine would be made available in December, Cmiel said, and a brief and stressful period of confusion followed while logistics about delivery were worked out. A small portion of staff members received vaccines from the city, Cmiel said. Those vaccinations were prioritized for staff of the facility’s acute psychiatric care unit and a few skilled nursing workers — a priority she said makes sense.

“That is where the danger lies for our residents and our patients, that we as health care workers are out in the community. And as careful as we are, we are still going to the grocery store, right, some of our staff are taking public transportation,” Cmiel said. “We are the risk to our residents and patients. So by vaccinating us first, I think it made a lot of sense to prevent us from bringing virus into the facility.”

Ultimately, CVS administered the majority of the doses. The pharmacy chain, along with Walgreens, contracted with the U.S. Centers for Disease Control and Prevention to vaccinate nursing and senior facility residents around the nation.

“Many facilities do not have the capability of maintaining the vaccines at the temperatures that they need to be maintained at,” Cmiel said. “I have to say it has worked out very well for us.”

Even with vaccination success, it will be a long time before things can return to normal at the facility. While the facility did see a coronavirus outbreak in December, its tracking page currently indicates there are no active infections on site.

Staff continue to take infection precautions, Cmeil said, and anyone who enters is subject to a health screening. While communal meals for residents have resumed, visits from family have been limited to pre-arranged meetings that take place outdoors and socially distanced. That, Cmiel said, is due to the city’s public health restrictions while the county remains in the purple tier, a state indicator connoting widespread infection risk. Purple is the highest-risk tier, and San Francisco is projected to drop down to the next less restrictive red tier, indicating substantial risk, as early as next week.

“I do believe that will change things once we do go into the red tier, I think that will make a difference. But while we’re still in the purple tier, we’re pretty limited. I doubt visitation will ever go back for a long time to what it was, with just walking in the door and dropping in,” Cmiel said. “I suspect there will always be some limit set, at least until we can say we’re beyond this crisis.”