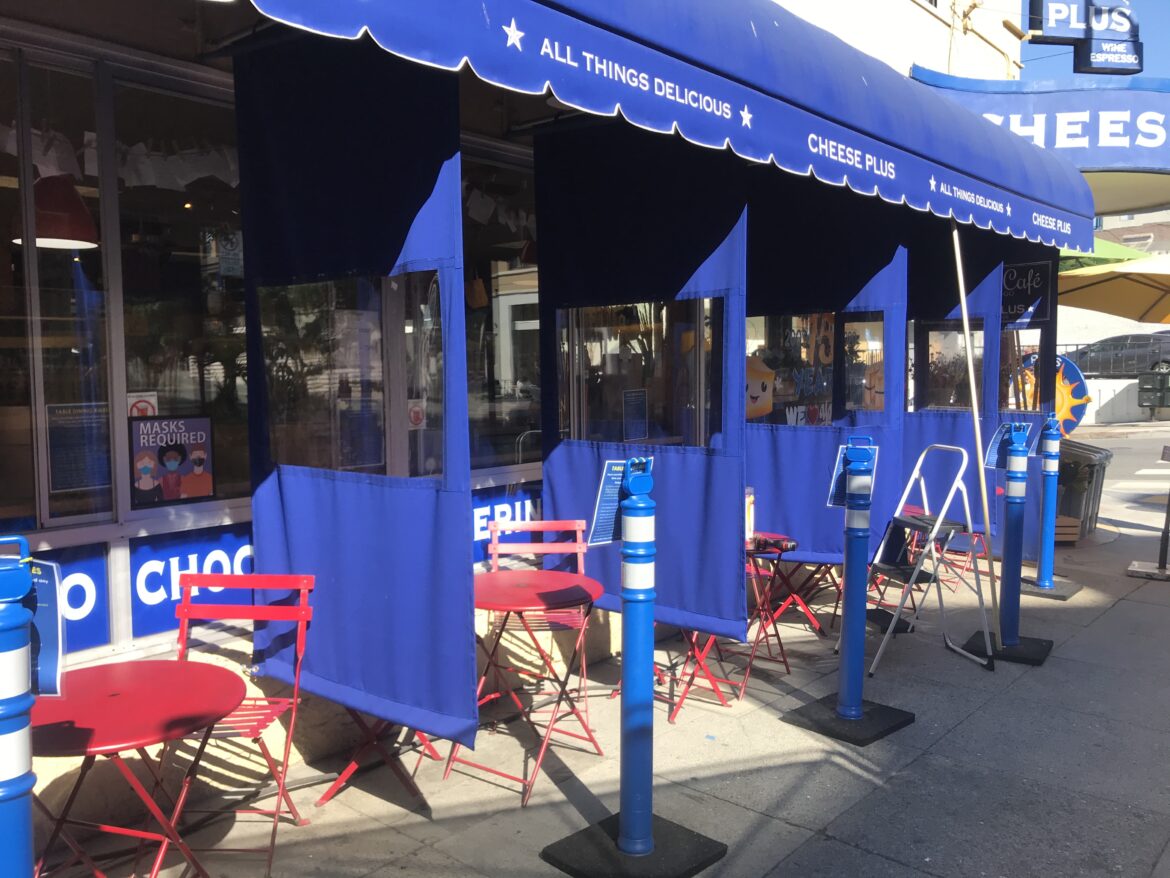 California has lifted its emergency lockdown order, and San Francisco will get official word on its new tier assignment Tuesday. City leaders expect San Francisco to be placed in the purple tier, which will once again allow outdoor dining. In October, Cheese Plus installed canvas dividers between tables along its Pacific Avenue sidewalk in the city’s Russian Hill neighborhood.

San Francisco Mayor London Breed said Monday that the state’s decision to lift an emergency lockdown order to contain the COVID-19 surge is “good news’’ and a “cause for celebration” even as she cautioned residents that “we have to just use common sense and continue to just accept that we are going to be living with this for some time.”

Gov. Gavin Newsom’s announcement means that individual counties will move back into the state’s colored tier system, which determines what businesses and activities are allowed. San Francisco will get the official word on which tier it is in on Tuesday.

City leaders expect San Francisco to be placed in the purple tier, which will once again allow outdoor dining, limited indoor personal services — if clients and patrons can both wear masks — more capacity in retail stores and the reopening of outdoor museums, zoos, skate parks and golf courses.

Breed said the decision to shut down the county earlier than required as the Thanksgiving surge began, saved lives. “If we had continued along the pace that we were going and did absolutely nothing, at this time — the end of January — we would be out of ICU beds,” she said. San Francisco’s intensive care unit  bed capacity stands at 26%.

The mayor said that city and local health organizations have set in place the systems needed to vaccinate as many as 10,000 people a day.  She appeared to rebuke critics, including members of the Board of Supervisors, who have second guessed her administration’s efforts.

“I will say that there’s been a lot of misinformation, there’s been a lot of criticism,” she said. “I want to be clear that had we waited to start more recently, like some people have said that we did, we wouldn’t be where we are now, opening large site, opening and setting up pop up sites.” She said the administration had been working with health care providers in the city on its plans since August

She also said the city will be able to shelter more homeless people in temporary hotel rooms now that the Biden administration has ordered the Federal Emergency Management Agency to provide 100% reimbursement for providing rooms for some people, but she made it clear it won’t help people who became homeless more recently.

She said a person must have been in the city system by last April to take advantage of the benefit. Breed said San Francisco is unable to assist latecomers who may have moved here hoping for an opportunity to get city help.

“We are not going to jump the line for someone who just decided to come to San Francisco yesterday,” she said.