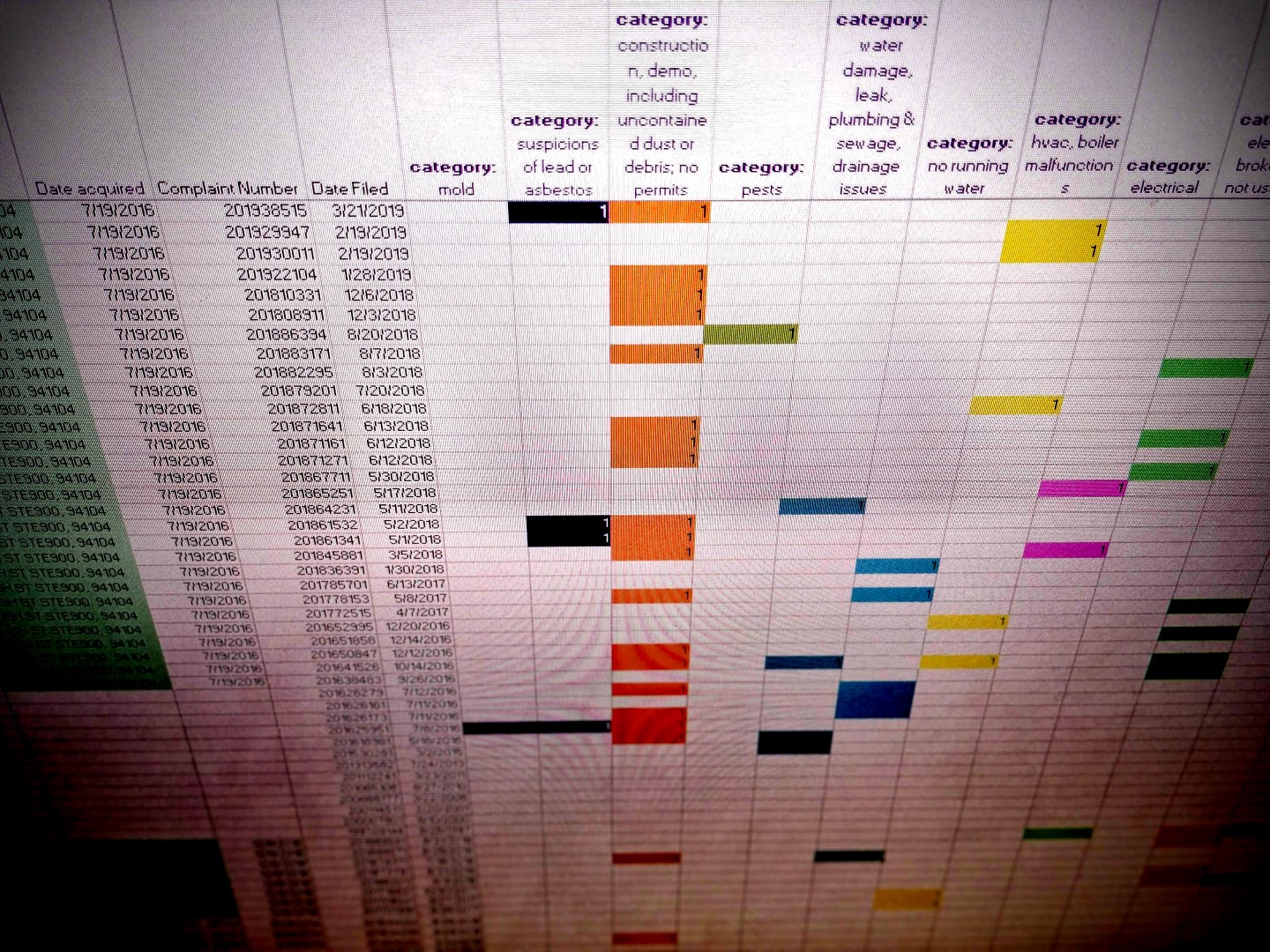 In our previous reporting on a tenant lawsuit against Veritas Investments Inc., most of the allegations and the company’s defense were rooted in anecdotes: they said/they said. We wanted to see if there was verifiable evidence underlying those arguments.

Were disturbances from apartment renovations widespread, as the plaintiffs in 39 buildings alleged? Did renters face noise, dust and debris? Were other habitability concerns like pests, water shutoffs and dead elevators common?

Or, as Veritas claimed, was the company diligent about attending to living conditions for all tenants, not just new renters who moved in to renovated, market-rate apartments? If so, we might expect to see fewer tenant complaints under the corporate landlord than under previous owners, and fewer proven violations of the building code.

To get some answers, we pored over the ownership histories of the buildings and transcribed them into our hand-made data set. We then layered that information over data from the Department of Building Inspection to identify trends.

Only then could we answer some basic, critical questions: At what rate had Veritas incurred complaints and building-code violations, and did that represent a change?

Our analysis needed to avoid misattributing to Veritas any complaints or violations that previous owners had incurred. That required us to determine when Veritas bought each building, information the company did not provide, despite requests.

Veritas buys buildings through proxies — limited-liability companies and limited partnerships — often named after property addresses, obscuring their interconnectedness. For example, Veritas owns the 45-unit building at 698 Bush St. through an entity called 698 Bush C1 LP; it owns the 86-unit building at 270 Turk St. through 270 Turk LLC, and so on.

In city records for the 39 buildings, “Veritas” appears in the names of only three previous owners that have since sold them to other entities — also owned by Veritas but similarly obscured.

Real estate investors can reduce legal exposure, conceal identities and reap tax benefits by purchasing through limited-liability companies or limited partnerships. “It is a standard, widespread practice in real estate to own properties through specific LLCs, and this practice has been in place for quite some time, not exclusive to Veritas,” company spokesman Ron Heckmann said earlier this year.

To establish when the earliest Veritas proxies bought the properties, we dug into ownership records and found that many of the purchasing entities had a common mailing address: Veritas’ corporate headquarters at 1 Bush St. in San Francisco. For LLCs and LPs that lacked this identifier, their registration forms — on file at the California Secretary of State website — showed Veritas CEO Yat-Pang Au as a signatory.

Using the Department of Building Inspection’s database, for each Veritas property we counted the complaints and violations incurred during the time the company has owned it, as well as for an identical time span preceding the company’s purchase date. We then totaled the counts for all buildings. The results revealed that complaints and violations both rose after Veritas bought the buildings.

Had the types of reported problems changed as well? Not an easy question to answer.

Surprisingly, the building department does not categorize complaints. So we spent days reading all complaint descriptions to determine the main types of problems and then created categories. A single complaint often contained several types of problems, such as vermin or mold, and each was counted. The results showed that construction-related complaints — frequently involving renovation of vacant units being readied for new tenants — had increased under Veritas.

Finally, we vetted our methodology with James Sanbonmatsu, a senior city housing inspector. He called it “great, and enterprising.”

A deeper analysis, more fully assessing how tenants are treated, would require greater disclosure from Veritas or any landlord about its holdings. Veritas may have acquired properties earlier than we know, through proxies that escaped our attention.

City Hall records the name of the entity purchasing a property, not the parent company behind that entity, or the parent’s parent — meaning that regulators and the public do not know the $3 billion real estate corporation’s full list of properties. And Veritas has not fully disclosed this or been consistent in its claims.

When the Public Press first asked the company for its total number of buildings, Heckmann said on Jan. 7 that it “manages over 200 rent-controlled properties within San Francisco.” When asked to be more specific, he said on Jan. 18, “We manage 230 properties.” The number changed again on Feb. 20, when Heckmann said “over 230 buildings.”

That correspondence regarded a spring 2019 Public Press report that focused on the lawsuit involving the 39 properties, which we mapped. One of those buildings, 270 Turk St., was missing from a list of addresses on the website for RentSFNow, the Veritas subsidiary that leases its apartments. That list had contained 210 addresses, about 20 fewer than Heckmann had previously declared.

On Feb. 25, the Public Press asked Heckmann to confirm that Veritas owned the building, and he did. In early April, a check of the site found that the list of properties had been removed. We asked why, and requested clarity on the total number of buildings the company owned. Heckmann did not answer those questions.

With property owners able to disguise their holdings, the building inspection department struggles to identify the most problematic landlords and enforce the city code.

“Those are the games that the landlords play,” Sanbonmatsu said. “It’s hard keeping up with the evasion strategies of the people you’re trying to regulate.

“They come up with new ones every day.”

This article and its companion, “Complaints and Citations Rise Sharply at Veritas Apartments Cited in Lawsuit,” appear in the summer 2019 print edition of the Public Press.