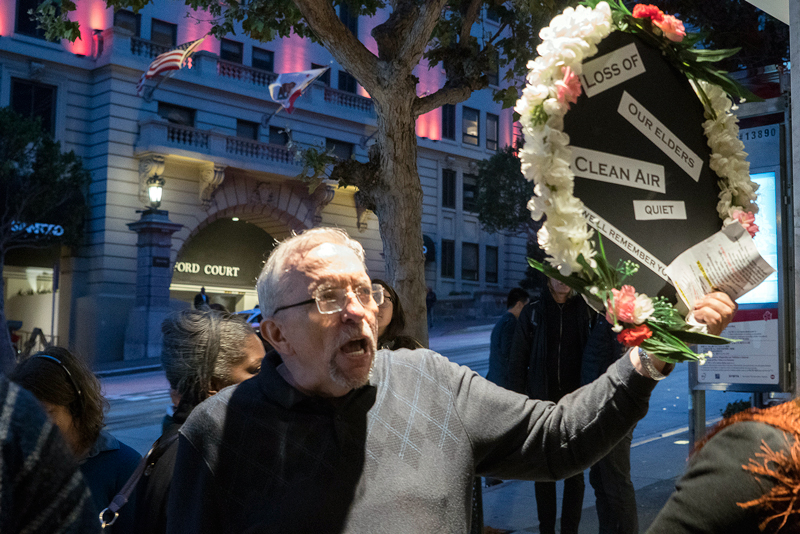 This article was updated Nov. 16 and appears in the winter 2019 print edition of the Public Press.

Several hundred sharply dressed real estate professionals made their way down a hall of the Fairmont hotel from a Champagne reception to an award ceremony in late September that celebrated Yat-Pang Au, CEO of Veritas Investments Inc., the largest residential and commercial landlord in San Francisco. The Northern California real estate community bestows its “Spirit of Life Award” during an annual fundraiser for its philanthropic beneficiary, the cancer research-and-treatment center City of Hope. Veritas donated $25,000 in 2018.

But before the guests were seated and Au received his accolade, about 25 protesters filtered through a side door to pay their own tribute to Au: They brandished a “Spirit of Greed, Eviction and Harassment” trophy while singing their pointed rendition of “Killing Me Softly,” the 1970s hit song by Roberta Flack.

Guests took in the scene awkwardly, some trying not to laugh, before security shepherded the protesters out of the Nob Hill landmark that has hosted notable business, social and political events since 1907.

“Veritas is the biggest example of a kind of real estate business that depends on harassment and eviction in order to be profitable,” said Brad Hirn, of the Housing Rights Committee of San Francisco, one of the organizers of the action. Hirn said that the statewide Proposition 10, which sought to repeal state restrictions in the 1995 Costa-Hawkins Rental Housing Act, represented the first step in undermining what he characterized as the company’s business model.

“The incentive to pressure tenants to leave is created by ‘vacancy decontrol,’” said Hirn, referring to the statutes that allow landlords to charge much higher, market-rate rents in regulated buildings when new tenants move in. “If we’re able to repeal Costa-Hawkins and look at the vacancy-control option, then that gets at the root of their business model.” Hirn described the strategy as “speculative acquisition.” That means that “to pay back the loans they’ve taken out to buy and rehab these buildings, they have to raise the rent on existing rent-controlled tenants through a variety of ways, or they just have to get them out.”

“This is not a new business model,” said Hirn. “But they’re just doing it on a scale, and with a sophistication in San Francisco that I don’t think we’ve seen before.”

But housing advocates were dealt a big blow in November, when voters overwhelmingly rejected Proposition 10.

In a survey the Housing Rights Committee circulated among 75 Veritas tenants, nearly half reported “receiving a three-day notice that seemed unwarranted, baseless or unfair,” whereas just over half claimed that they, or someone in their household, had suffered a physical ailment or health issue, as a result of construction. Nearly 40 percent of those surveyed said they had to temporarily vacate their units because of construction, almost always without the required advance written notice.

The committee has testified before the Rent Board to raise ethical concerns about Veritas’ practice of contracting with companies founded or run by family members.

“We see a lot of inflated costs, potentially fraudulent costs and also we see their web of contractors, which is really problematic,” said Hirn. “They create these shell companies that are owned by family members of the CEO and they circulate money within themselves.”

Among the allegations are that Veritas Investments and its CEO, Yat-Pang Au, have harassed tenants with extended shutoffs of power, gas and water; engaged in disruptive, incomplete or shoddy construction; violated San Francisco Rent Board regulations on temporary evictions for repairs; and tried to raise rents with questionable pass-through costs or by assessing tenants for interest costs on high-rate loans Veritas secured for its portfolio of more than 300 buildings.

“We have not been served, so we cannot respond to allegations we haven’t seen. However, we dispute all claims that we are hostile or negligent toward our valued residents in any way,” Veritas Chief Operating Officer Justin Sato said in a statement, the San Francisco Examiner reported.

Veritas became San Francisco’s largest residential and commercial property owner in 2011 when it purchased a massive portfolio of housing from notorious CitiApartments, which reached a multimillion-dollar settlement with the city attorney over allegations it harassed tenants and did not make repairs. Veritas specializes in purchasing old, rent-controlled properties and rehabbing them for high-end renters. The firm says it manages nearly $2 billion in real estate assets in San Francisco and the Bay Area overall, with almost 200 apartment buildings in San Francisco, mostly 20 to 50 units. Its “vertically integrated business” includes RentSFNow and Greentree Property Management.

Although rent control benefits Veritas by depressing the purchase price of the properties, it restricts the company’s ability to raise rents to meet profit targets. That’s why, overall, Au has said rent control constrains his ability make upgrades and reduces the supply of modern housing. It requires landlords to wait for units to turn over to higher-paying tenants, or, as tenants-rights advocates contend, to pressure them to leave.

“Investors are realizing that upgraded, classic buildings offer residents the unique, non-cookie-cutter, amenity-rich lifestyle in great demand today,” Au wrote in 2017 in the trade publication Multi-Housing News. “These types of properties form a highly valued and appreciating asset class that, due to its desirability and stability, can provide excellent returns for our investors due to the lower initial cost and significant potential return. And because smaller properties are generally owned by smaller, individual entities, it’s exceedingly difficult for newcomers to aggregate portfolios of a meaningful size to take advantage of the economies of scale.”

Veritas did not respond directly to requests for comment about its business or allegations involving tenants. Violation Radar, a firm Veritas pays to track building code complaints and violations, said in an email that “Veritas has a lower-than-average rate” compared with other San Francisco landlords.

‘Most Proactive’ With Complaints

Because of its size, Veritas “may well have a higher total number because most of San Francisco’s rental property is owned by small, mom-and-pop owners,” wrote Devon Bradley, of San Francisco-based Violation Radar. “When compared to large property owners, it is a fact that Veritas is the most proactive and has the best track record at responding to, and resolving, such complaints.”

He added that “I’ve noticed a greater than 10% decrease in active building code violations against Veritas properties over the past year.”

There is little public data available for Veritas’ properties. That is because each building is its own limited liability company, and there is no requirement that landlords report to local officials all buildings they own under a single entity.

A 2013 structural and collateral term sheet filed with the Securities and Exchange Commission for a loan financing 44 Veritas properties throughout San Francisco offers one window into Veritas’ business model. It shows just under 99 percent of the units were occupied when Veritas bought the buildings. It also shows that the company “has achieved an annual turnover of 30.7 percent of total units.” In other words, Veritas replaced nearly one third of its tenants in a year. When a unit turns over, the rent increases, on average, by 466 percent.

The Role of ‘Pass-throughs’

The Housing Rights Committee’s Hirn cited a host of what he called “abusive” practices, including unlawful rent hikes, habitability code violations, eviction threats and unsafe construction zones. Lawsuits have been filed on behalf of tenants in two buildings: 634 Powell St. and 300 Buchanan St. These suits focus on violations of Section 37.10B of the city rent ordinance, arguing that Veritas’ behavior amounts to tenant harassment.

Central to these lawsuits are allegations that Veritas has exploited regulations about so-called rental pass-throughs. Landlords may petition the Rent Board to increase tenants’ rents if the cost of operating the building exceeds the amount the landlords receive in rent. Pass-throughs can legally and permanently increase tenants’ rents by as much as 7 percent of their base rent.

Rent Board Executive Director Robert Collins said his agency received pass-through petitions on 1,161 units last year, a fivefold increase from a decade ago, when only 228 units had petitioned. Veritas was targeted during public debate in May, when the Board of Supervisors unanimously passed legislation cracking down on landlords that exploit the law to pass along the cost of loans and property taxes, rather than improvements.

“The goal of pushing these costs onto tenants is to price them out of their units so they can be re-rented out at market rates,” former District 8 Supervisor Jeff Sheehy said at the time.

However, these new laws do not address some of the pass-through violations alleged in the lawsuits filed against Veritas.

The Housing Rights Committee, along with Veritas tenants, approached the City Attorney’s Office about taking action against the company. Spokesman John Coté would not say whether the city attorney is investigating, stating that investigations are confidential.

After the activists’ protest at the “Spirit of Life” award ceremony, Veritas tenant Gunvant Shah said that rather than make philanthropic donations, his landlord “should take care of our tenants first.” Shah has lived at 698 Bush St. for over 40 years.

“I paid for their mortgages,” he said. “And I have to go to food banks. The conditions I live in … in my old age, I’m living disgracefully.”

Shah’s building has 46 units, 17 of which are single-room occupancies with shared bathrooms. He said that unsafe construction had exposed him and his neighbors to asbestos, lead and other toxins. “I have lead poisoning — 10.9 percent in my blood,” he said.

Shah campaigned to pass Proposition 10 and expand rent control. “Tenants have no power,” he said. “We need more protection.”