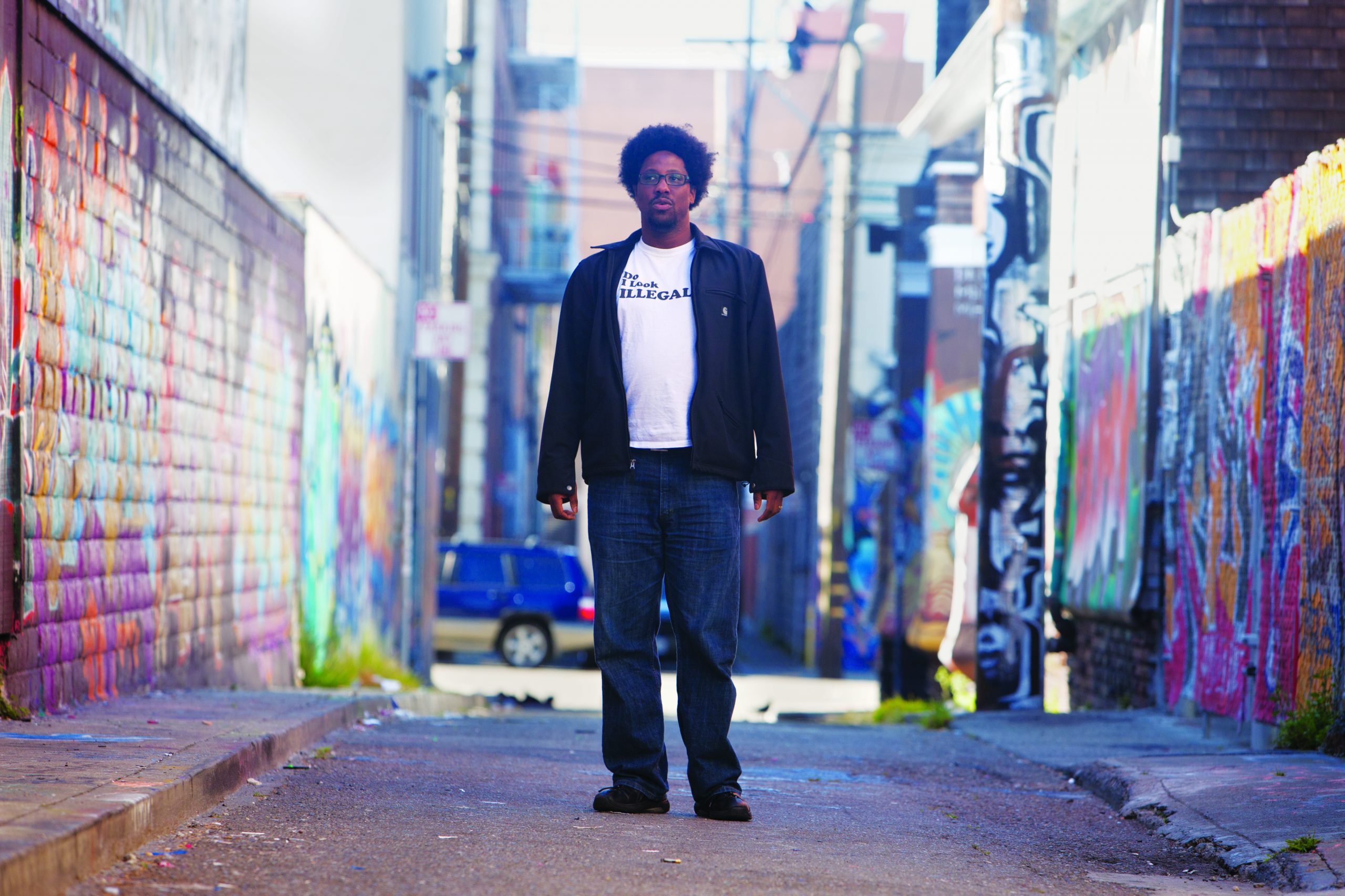 W. Kamau Bell says his goal is to end racism in one hour, no joke. Photo by Monica Jensen/SF Public Press.

Any artist who promises to end racism in about an hour will earn his fair share of cynics. Comedian W. Kamau Bell was well aware of that when he launched his solo comedy show, “The W. Kamau Bell Curve,” in fall 2007.

During a run at San Francisco’s Shelton Theater a few months later, Bell watched from the corner of his eye as a middle-aged couple shuffled out of the room. He was roughly 15 minutes into a well-honed comedy set that lampooned the idea of “post-racial” America. He resisted his knee-jerk tendency to heckle the man and woman as they quietly left their seats.

“They weren’t making a huff or anything,” he said. “In my mind, I’m just like, ‘Oh, they gotta go to the bathroom.’ I didn’t think anything of it. They never came back, but I also never noticed.”

After the show, Bell’s producer, Bruce Pachtman, looked somber. “That couple left,” he said. Apparently the man was repelled by Kamau’s material. He was white and characterized himself as a progressive.

“I feel like I’m being blamed,” the man told Pachtman. “I don’t have to listen to this; I’ve done a lot for black people.”

“If I’m a straight white guy and I go to a show about racism, I would expect to get something on me — that they’d start flinging the s— stick my way,” he said. “I thought, ‘That is hilarious. Absolutely hilarious.’”

In fact, San Francisco progressives – particularly the ones who have “done a lot for black people” – were the impetus for Bell’s show. He began writing the first bits just a few months after the Don Imus flap, when the MSNBC talk show host in April 2007 called the Rutgers University women’s basketball team — made up of eight African- American women and two white women — “nappy-headed hos.”

At that time, America had begun conceiving itself as a “post-racial” society, even though the label seemed unwarranted. Celebrities like Sarah Silverman engaged with race in a way that challenged social norms, but also teetered right over the edge of political correctness. (Kamau says his beef with Silverman was a big inspiration for “The Bell Curve.”) Some, like Michael Richards and Rosie O’Donnell, had already crossed the line.

With the advent of YouTube and an increasingly permissive shock culture, racial outbursts had become a common media event. But somehow, these so-called celebrity meltdowns weren’t cause for major concern or discussion. Imus might have been scorned, but he was still treated as an aberration. Many people thought that if we cast a blind eye to racial inequality, it might disappear on its own. Bell wouldn’t buy it.

“You know after a while, this starts to hurt,” he said. “I felt like Russell Crowe’s character in ‘A Beautiful Mind,’ looking through magazines, making connections and drawing from one magazine article to another. I was really trying to draw these connections and prove that there’s actually this culture of racism that we’re accepting as just being crazy celebrities, when it actually can affect the populace as a whole.”

Bell is not a provocateur per se. Born in Chicago, he launched his comedy career 13 years ago when he moved to San Francisco. Race has always informed his bits and he’s always told jokes in monologue form. Many critics would cite George Carlin and Lord Buckley as his proper antecedents.

“I would transcribe their bits just to see what they looked like on paper,” Bell recalled. “I bolded the punch lines. It just seemed magical.” Bell’s interest in racial themes aligns him with other local performance artists who’ve made it their business to analyze race — both as a construct and a lived experience. He belongs in the same camp as poet Chinaka Hodge, rapper Boots Riley, monologist Jennifer Jajeh, novelist Adam Mansbach and emcee Ise Lyfe.

Among comics, though, Bell stands out because of his format and his intentions. He started off with a one-hour routine that was partly anecdotal and largely about spoofing celebrities. After Barack Obama’s election, the show transformed and became mostly political in nature. Now, it’s a pedagogical tool. He’s trying to prove something to liberals of San Francisco and to do it, he needs visual aids.

“San Francisco is 6 percent black — I’ve heard it reported at 7 percent — and for a city that considers itself one of the most liberal cities in the world, we aren’t even as black as Jasper, Texas,” he said. “That’s impactful enough that the show can be built on that point.”

More than 2-1/2 years in business, Bell has incorporated YouTube clips and PowerPoint presentations into “The Bell Curve.” He’s learned to stay on top of the news cycle, mine Wikipedia for material and try the premise for a new joke on Twitter, right before he presents it onstage. He goes to town every time a big race story hits the media — like Henry Louis Gates getting arrested for breaking into his own house. (Bell’s take: “Now that there’s a black president, they have to invent new crimes for black people.”)

Bell takes a rather imperious approach to comedy, but he does occasionally glean something from audience feedback. Within a week of the walkout incident, he found an answer to the white guy who’d done a lot for black people.

He’s now perfected the bit, which pays homage to “five white guys from history who can say they’ve done a lot for black people.” They are: Abraham Lincoln; Lyndon B. Johnson (for ratifying the Civil Rights Act); abolitionist John Brown; Branch Rickey (who signed Jackie Robinson to the Brooklyn Dodgers); and Olympic silver medalist Peter Norman, who stood by while his fellow medal-winners made Black Power fists at the 1968 Olympic ceremony. According to legend, Norman also was complicit in the act, because he suggested that gold medalist Tommie Smith and bronze medalist John Carlos share Smith’s gloves after Carlos forgot to bring his own.

“You see?” Bell recently asked his audience at Berkeley’s La Peña Cultural Center, after presenting a slide of the famous 1968 photograph. “Peter Norman did that ‘think outside the box’ thing that you white guys are so good at!”

People laughed. A few looked embarrassed. But nobody walked out.

Rachel Swan is the music editor at East Bay Express.