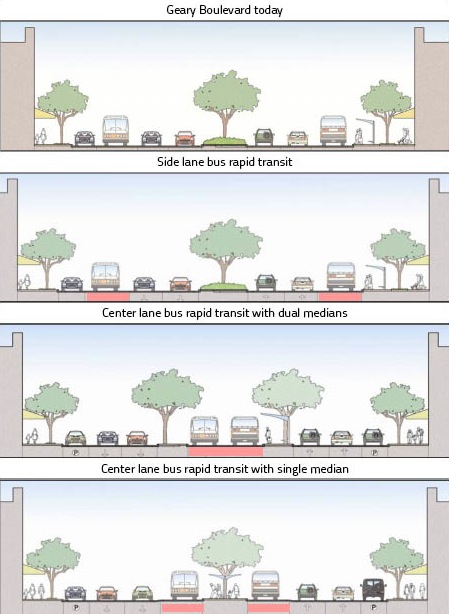 CORRECTION 8/1/12: The fourth paragraph has been updated to specify where on the 38L bus line the eight minutes of time savings would occur and to revise the estimated ridership increase.

Those hoping for a quicker ride down Geary Boulevard on a shiny new bus rapid transit system will have to be patient. Current plans say it won’t go into service until 2019 at the earliest.

Bus rapid transit, which is meant as a cheaper substitute to light rail by using special buses in dedicated traffic lanes, is set to debut on Van Ness Avenue in 2016. However, design challenges and funding are slowing down plans for the Geary route.

Transportation planners from the San Francisco County Transportation Authority, the lead agency in planning for the project, have spent more than a year researching ideas for the best way to implement the estimated $200 million plan. Currently, the 38-Geary, 38L, 38AX and 38BX bus lines, which have a combined 50,000 passengers a day, run along the corridor that connects riders to the inner and outer Richmond District and downtown San Francisco.

Planners said bus rapid transit on Geary Boulevard could save riders up to eight minutes of travel time on the 38L (between 33rd Avenue and Gough Street) and boost ridership by up to 25 percent (depending on the street design). The current plan has dedicated transit lanes starting at 25th Avenue and ending at Gough Street, with the 38L as the line using those lanes. But two major intersections between the starting and end points have complicated the design process, said Chester Fung, principal planner for the Geary project.

Masonic Avenue and Fillmore Street have underpasses, which separate traffic on Geary Boulevard for those motorists who want to connect to those streets.

“It’s relatively complex and poses constraints to us in how we provide both the dedicated bus lane and how we provide a transit station in this area,” Fung said.

Fung said planners have gone through at least a dozen designs just for those two intersections during the past year, but have narrowed them down to three. One option is keep to have bus rapid transit above the underpass (street level), using side roads. Parking and loading zones along those streets would be affected, but the plan would not require new transit stations.

The other options call for putting a center lane for bus rapid transit using either a single or double median, but that would require putting transit centers at the underpass. Fung said a staircase and elevator would be needed at the top of the underpass so riders can access the bus stop. Fillmore Street has a similar problem. Because of an 8 percent grade below the underpass, it would not be possible to put transit stations in the center unless the underpass is filled and the streets are leveled. Fung said that could cost as much as $50 million.

Muni rider Johanna Ward, who attended one of three community meetings held by the authority last month, said the project looked “very promising.” Ward was not fond of the idea of putting a bus stop below the underpass. She said it would be difficult for riders who have baby strollers to walk up and down the stairs and was worried about the elevators malfunctioning, which they often do currently in the Muni Metro stations.

Further complicating the timing of the project is a lack of funding. Fung said the authority is working on applying for a federal grant. It is also trying to persuade the Metropolitan Transportation Commission to help with funding. The authority could get as much as $75 million from the federal grant and $50 million from the local sales tax, leaving it $75 million short. A final design is supposed to be chosen by 2014 with construction beginning in 2017.

Riders who missed the three community meetings can visit the Geary bus rapid project website to submit comments or to stay up-to-date on the project. Link: http://www.sfcta.org/content/view/37/70