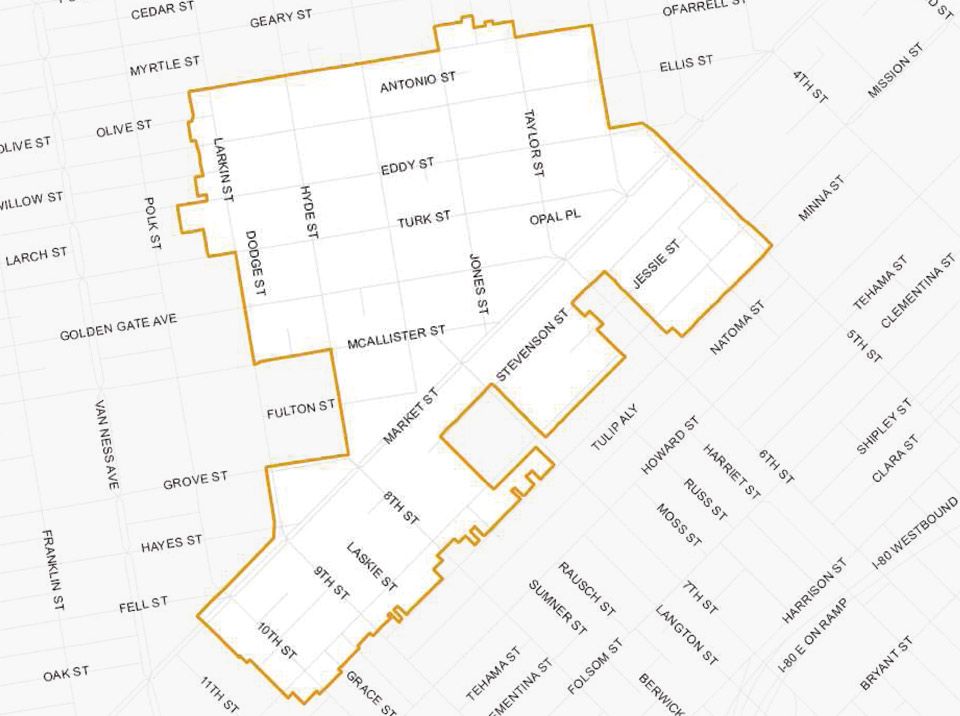 The city’s efforts to revitalize mid-Market through the Central City Market Loan Fund excludes businesses that sell adult books, escort services and liquor stores within the zone. Map from Mayor's Office of Economic and Workforce Development.

An $11 million city fund to create a mid-Market Street cultural district so far has yielded one government loan — to a restaurant — while dozens of small performing arts groups cannot take advantage of the program because of their limited financial resources.

Mayor Gavin Newsom announced the Central Market Cultural District Loan Fund in January as a way to support and concentrate arts groups to bring life back to the city’s long-depressed central corridor. Mid-Market stretches from Fifth to 10th streets on Market Street and from Mason to Larkin streets and up to O’Farrell Street in the Tenderloin, according to the city loan guidelines.

“We feel like in some ways, the arts piece is a means to a larger end,” said Amy Cohen, director of neighborhood business development for the Mayor’s Office of Economic and Workforce Development. “It’s a means towards making the neighborhood a better place to do business, which will spur retail to locate in the area, thereby providing goods and services neighborhood residents need, such as a grocery store.”

To date, the economic office has announced only one loan — to Pearl’s Deluxe Burgers — and will not even say whether any other organizations or businesses have applied.

A public records request by the Public Press for copies of applications that the office has received was rejected. City officials cited California Public Records Act, section 6254.15, which allows an exemption from disclosure for some corporate proprietary information and information furnished to a government agency by a private company.

Cohen said the city wants to be “flexible about the definition of what is part of the cultural district, and therefore what we can fund.”

Loans from the $11 million fund will be made in amounts from $250,000 to $1 million. But guidelines provided to prospective applicants say that “exceptional” cases could go as low as $50,000 and as high as $4 million. For-profit and nonprofit commercial endeavors are eligible for the loans, with “priority… given to businesses that anchor or complement the cultural district.” The loans can be used to buy real estate, for new construction or rehabilitation, and improvements, among other uses.

The interest rate for these loans, funded through money the city received from the U.S. Department of Housing and Urban Development, is about six percent and the loan term is for up to 20 years, Cohen said.

Although city representatives have said that the fund aims to help local arts organizations take advantage of the loan program, many do not have the capital or income to meet the loan requirements. Additionally, the terms of loans are linked to job creation in a low-income neighborhood, Cohen said, so every $50,000 borrowed needs to provide a brand-new job.

Pearl’s, which will open its fourth location at 1001 Market Street near Sixth Street, is expected to establish 16 permanent jobs and between 22 and 33 construction jobs.

“If we fund a theatre with that loan, it has to be a new theater or theatre that’s moving from somewhere to here, but is also expanding to create new jobs,” Cohen said.

Which means a theater that is relocating with its existing staff, but not expanding, probably would not qualify, she said.

“I think it’s very likely that we’ll use the money for restaurants,” Cohen said. “It’s easier to use it for a new venture because you have to create new jobs, so if you move a business from one location to another, that doesn’t count as new jobs.”

While there is substantial interest among Bay Area performing arts groups to relocate to mid-Market, they do not have the financial ability to move to the envisioned arts-and-culture corridor – including taking advantage of the city’s loan program.

In August, the loan fund released the results of a survey showing interest in mid-Market by arts groups. Theater Bay Area, an association of arts organization tallied the online survey results.

Brad Erickson, executive director of Theatre Bay Area, said that of 110 performing arts organizations responding to the survey, about “75 companies were interested in relocating to mid-Market if the venues were there and the rents were close to what they were currently paying. But very few of them have money to buy and build out spaces to create new venues. That’s going to be the hurdle — finding the capital.”

According to the survey, which is posted on the San Francisco Redevelopment Agency’s website, the majority of arts groups interested in relocating, 48, have annual operating budgets of less than $100,000; another 14 have between $100,000 to $500,000. At the top tiers, 11 groups said their yearly budgets are more than $500,000 and four said $1 million or more.

Most organizations that responded to the survey said they could not raise the funds required to purchase space; the loans were also seen as a challenge because a company’s income would need to be significantly higher than the monthly loan payments in order to qualify.

This is also a tough time for Bay Area arts groups to consider taking on debt, since the poor economy has led to reductions in grants by private groups.

“We keep very close working relationships with private foundations in the Bay Area,” said Luis Cancel, director of cultural affairs for the San Francisco Arts Commission. “They have reported to us that the foundation giving has dropped by at least $30 million in the last fiscal year — and that’s a very significant cut to the cultural organizations.”

The irony, say arts champions, is that because of the real estate slump, this is a favorable time to relocate.

“The timing is good because property on mid-Market Street and throughout San Francisco is somewhat depressed,” said Bill Schwartz, founder and chairman of The Coalition for a Mid-Market Theater District and the founder of the San Francisco Theatre Festival.

“The other side of the coin is that financing property is a little more difficult because of the lack of wealth in the community because of the recessionary time,” he said.

PianoFight, a private production and venue management company, is moving from the Off-Market Theaters on Mission Street to where the Original Joe’s restaurant was located, 144 Taylor Street, without the aid of these loans.

The founders — Dan Williams and Rob Ready — said that their new theatre complex will feature a 55-seat theater, a 99-seat theater, four rehearsal rooms, four office spaces, a lounge, and a bar/café.

At the end of October, the Tenderloin Economic Development Project, a program of the North of Market Neighborhood Improvement Corporation, held a meeting on how arts facilities can be incorporated into community economic development. Meeting partners included the city, the Northern California Community Loan Fund, and other local organizations.

Even if the city and the community want a mid-Market arts district, the primary challenge is that the property in the area is in private hands, Padilla wrote in an e-mail. Acquiring the land and development costs are additional obstacles.

“We are attempting to meet these challenges through active negotiations with property owners and development of new resources — like redevelopment — to finance important projects,” Padilla said.

The city’s loan program, said Erickson, is part of a bigger picture that includes other funding sources for the arts.

A $250,000 grant awarded by the National Endowment for the Arts to the San Francisco Arts Commission earlier this year has facilitated the creation of an arts market in the United Nations Plaza. (Independent Arts & Media, the fiscal sponsor of the Public Press, is a beneficiary of the grant.)

CLARIFICATION (3/17/11): Luis R. Cancel, director of cultural affairs at the San Francisco Arts Commission, pointed out in a recent letter to the Public Press that the $250,000 awarded to the commission from the National Endowment for the Arts included a wider array of programs than just the U.N. Plaza arts market. Those other programs, including Art in Storefronts, lighting installations, pre-development studies, arts organizations and marketing were also supported through these funds.