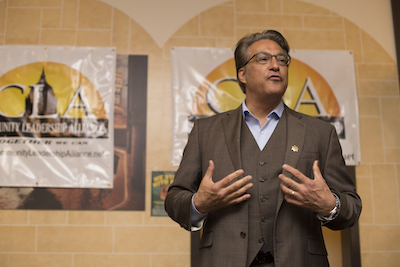 Sheriff Ross Mirkarimi is facing two challengers in his bid for re-election: Vicki Hennessy, who spent three decades in the department and served as interim sheriff in 2012 (after Mayor Ed Lee suspended Mirkarimi over a domestic-violence case involving the new sheriff and his wife) and John Robinson, a retired sheriff’s commander.

Ross Mirkarimi was elected sheriff in 2011. From 2005 to his 2012 swearing-in, Mirkarimi represented the Haight-Ashbury and Western Addition neighborhoods on the Board of Supervisors. Before that, he was a white-collar-crime investigator in the District Attorney’s Office, during which time he also graduated from the San Francisco Police Academy.

From the first days of his tenure as sheriff, Mirkarimi has been mired in controversy.

Soon after donning his star, Mirkarimi pleaded no contest to a misdemeanor charge of falsely imprisoning his wife in a 2012 domestic violence case; the charge was later expunged from his record. Since then, a series of other scandals have occurred on his watch: sheriff’s deputies assigned to San Francisco General Hospital failed to locate patient Lynne Spalding after she went missing and was found dead days later in a stairwell that supposedly had been searched; two inmates escaped in separate incidents; deputies allegedly forced inmates to compete in gladiator-style fights; and, most recently, the case of undocumented transient Juan Francisco Lopez-Sanchez, a seven-time nonviolent felon accused of killing Kate Steinle on the Embarcadero after the sheriff’s department had released him, even though federal authorities were waiting to deport him a sixth time. The case highlighted law enforcement tensions over San Francisco’s status as “sanctuary city.” Vicki Hennessy says she has held nearly every rank in every division over her 32-year career in the sheriff’s department. She ultimately rose to chief deputy, and in 2012 served as interim sheriff amid Mirkarimi’s marriage scandal. She says she is coming out of retirement to challenge Mirkarimi, whom she criticizes chiefly for failing to work effectively with his staff.

In an Oct. 1 debate, Hennessy said she was running for sheriff to “restore proactive leadership that doesn’t operate from crisis to crisis.”

She has the backing of the rank-and-file Deputy Sheriffs’ Association, which often backs an opponent, and the Sheriff’s Managers and Supervisors Association.

John Robinson retired from the San Francisco Sheriff’s Department in 1994 after a 20-year career. He now owns Inter-State Security Inc., which provides security to companies and events.

He says the department needs “deeds not words” to strengthen leadership, improve communications and morale, and for “taking responsibility for the actions of the Sheriff’s Department and its employees.”

Mirkarimi has made some dramatic policy changes to the sheriff’s department, which operates the county jails, serves eviction notices and warrants and provides security at City Hall, local courts and city-run hospitals and clinics. He lowered the cost of inmates’ phone calls; started a program that provides college classes to inmates; made it possible for deputies to train for street patrols for the first time; and has gradually begun housing inmates who are transitioning genders with others of their preferred gender.

At the Oct. 1 debate, Hennessy said that Mirkarimi had decided to change the policy on housing transgender people before consulting the Deputy Sheriffs’ Association, which was worried that the new practice could lead to sexual assaults. She said this exemplified a communication breakdown between him and his staff.

Mirkarimi responded by saying that while it was important to garner political support, he was not going to wait for that support before changing the longstanding policy of segregating transgender inmates from the rest of the jail’s population, which he called “dehumanizing.”

Hennessy supports building a new jail that would feature rehabilitation programs for inmates. Mirkarimi disagrees, saying that a new jail only seems necessary because people with mental illnesses, who are inundating existing jail space, receive inadequate treatment from hospitals and other city agencies and have nowhere else to go.

Mirkarimi has called San Francisco’s jails “the largest mental hospital in the city.” In July of this year, his office obtained a $950,000 state grant to help treat and temporarily house low-level offenders with mental illnesses. Mirkarimi would also like to redirect some of City Hall’s budget to set up a public health center inside the county jail. The center would provide psychiatric services to the 70 percent of inmates who are merely awaiting trial and sentencing.

Mirkarimi has also asked the mayor to give him enough city funding to equip sheriff deputies with body cameras. Lee has not granted that request, despite unveiling his own $6.6 million plan to put body cameras on every SFPD officer who walks the city streets.

Hennessy’s political agenda includes many points: If elected, she would ramp up training for deputies in an effort to disabuse them of any implicit biases that affect how they treat inmates; create a program in which department staff would advocate on behalf of inmates who reported being mistreated; and create “an early warning system for employee misconduct.”

Robinson has said he would form a criminal justice task force to fight institutional racism, identifying and reforming policies that lead to disproportionately incarcerating African American and Hispanic people. He has also said he would work with public schools to reduce truancy and youth incarceration, and that he would prioritize job training for inmates.

The three candidates debated Oct. 16 on KQED-FM, and Mirkarimi and Hennessy squared off Oct. 19 on KALW-FM.