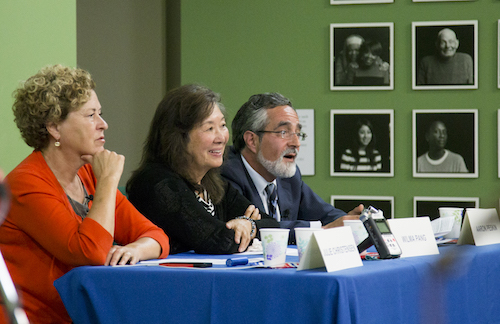 Aaron Peskin represented District 3 from 2001 to 2009. He takes credit for passing 205 resolutions and ordinances before being termed out. He is running again having sat out the required four years.

Wilma Pang is a trained singer and has been a teacher for 35 years. She founded A Better Chinatown Tomorrow, a nonprofit that regularly organizes musical and cultural events in Chinatown.

Christensen has said that, if elected, she would try to ease the crisis by reducing incentives for landlords to evict tenants, and to restrict apartments from being used as short-term rentals through Airbnb and similar services.

Peskin has said he would try to amend laws around Ellis Act evictions. Right now, under state law, building owners who evict tenants through the Ellis Act to remove the property from the rental market must wait 10 years before they can convert those units into condominiums for sale. Peskin said that is not long enough.

“I think we have to elongate that, to a longer period,” he said, without specifying how much longer.

Pang is focused primarily on Chinatown, where she said comparatively affluent “hipsters” are increasingly displacing immigrants for scarce rooms in the neighborhood’s single-room occupancy hotels. This competition for affordable market-rate housing cuts into Chinatown’s Asian population, which has declined by 10 percent since 1980, according to a University of California, Berkeley study done in partnership with the Chinatown Community Development Center.

One of the most divisive citywide issues is short-term rentals and their role in the housing crisis.

Peskin supports Proposition F, which would limit to 75 days a year how often city residents could rent out their homes through Airbnb, HomeAway, Craigslist or similar sites. For the most part, City Hall does not monitor this industry, which has effectively set aside thousands of apartments and houses as short-term rentals for tourists instead of making them available for permanent residents.

Those regulations limit hosts to renting out their entire homes a maximum of 90 days per year, but unlimited rentals are allowed if the host is living on-site at the time. Right now, the burden falls to city staff, the short-term rental hosts themselves or their neighbors to identify scofflaws.

By comparison, Prop F would compel Airbnb and similar services to give host data directly to city staff, who could then more effectively identify people who were breaking the law, Peskin said.

Christensen and Pang oppose Prop F. Christensen argues that current regulations are sound and that more hosts will comply now that the Board of Supervisors has created a new enforcement agency.

Pang calls Prop F “too extreme” because it gives neighbors an incentive to “spy” on each other.

The candidates are also divided over Proposition I, which would temporarily block the construction, demolition or conversion of nearly all new, unpermitted, market-rate housing in the Mission District. At the Sept. 30 debate, Peskin said the 18-month moratorium would give city officials “an opportunity to retool” the local regulations that determine what types of properties can be built in that neighborhood and which, historically, have not satisfied the needs of the community.

But Christensen fired back, saying the moratorium itself “would not lower rents or keep artists from moving out,” echoing an assessment by the city’s chief economist. Instead of halting development, she said, it would be better to “manage and mitigate” it. Pang told the Public Press that she opposes Prop I for similar reasons.

Peskin has said that, if elected, he would try to reform the state Costa-Hawkins Rental Housing Act so city officials could expand rent control to apartment buildings built after 1979. In 2014, San Francisco had more than 171,000 rent-controlled units, which constituted 72 percent of all rental housing. Owners cannot raise rents beyond a maximum annual percentage pegged to the cost of living — this year, 1.9 percent.

Christensen has said that, rather than focus on state-level changes, she prefers to work on improving immediate, local policy. To that end, she sponsored a law the supervisors passed in September that indirectly expands rent control to cover new apartments built inside rent-controlled buildings. The move aligns with a general goal to increase housing density, which she shares with the other candidates.

All three candidates support Proposition A, which would create a fund to help build new affordable housing. Pang said she hopes it would give Chinatown’s incoming immigrants more housing options.

For Pang, besides trying to ease the housing crisis, one of her top goals is to reduce the cost of child care. If elected, she would try to secure government funding to help new, private child-care centers to open in Chinatown. Child-care affordability and availability are not major aspects of either Christensen’s or Peskin’s platforms.