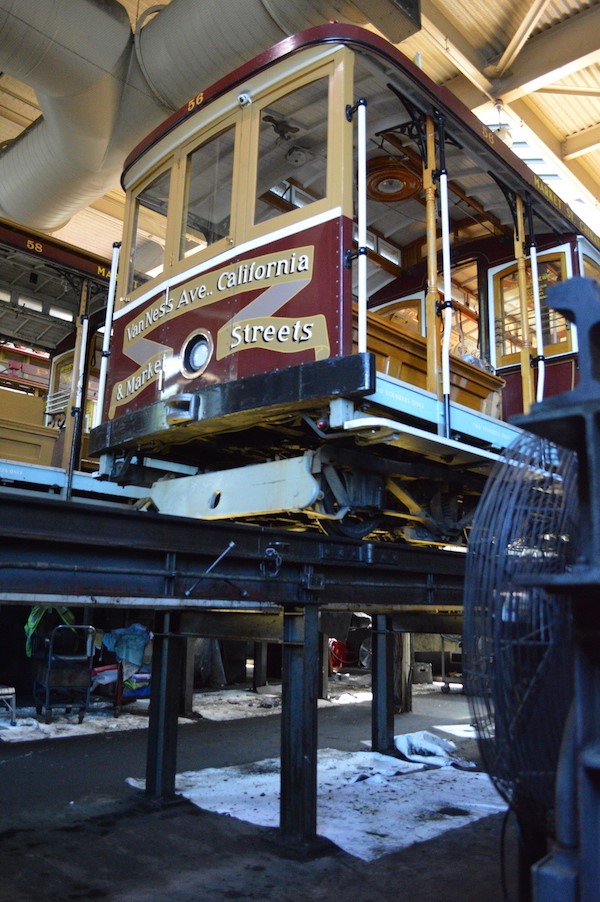 At San Francisco’s cable car barn on Mason Street, the large looms of wire that power one of the city’s most popular tourist attractions used to produce a loud, uninterrupted whirring. Now, the building’s interior is so quiet it’s unnerving.

On March 17, the San Francisco Municipal Transportation Agency shut down the cable cars, three weeks before scaling public transit service back to just 17 core bus lines to protect riders and drivers from the coronavirus. With cable car service discontinued, the din that formerly dominated the building’s soundscape has disappeared. You can notice the pigeons making calls outside, Wesley Valaris said.

“You would hear the constant noise of the motors along with the cable in the street,” said Valaris, senior operations manager of the agency’s Cable Car Division. “So, in a sense, it’s eerily quiet but it’s kind of neat at the same time.”

In the nearly empty building, mechanics, carpenters and painters have complete freedom. They can repaint, repair and update every cable car, accomplishing work at a scale that would have been impossible if the cars were running. The cable cars operate on what Valaris describes as “a very mechanical system that still functions the same way it did 100 years ago.” To be precise, San Francisco’s unique cable-powered railway system has been in service for almost 147 years, since Sept. 1, 1873.

It can take up to two years to make a new cable car. Virtually every part of the cable car system is custom made. The pieces are too old and antiquated to be on the market anymore. And many of the parts have to be worked on every week.

“We have these various pulleys throughout the system that have to be maintained on a continuous basis and they have to be checked,” Valaris said. He added that it is much cheaper to maintain the machinery than to fix something when it breaks.

A pause on cable cars means that the cable car crew can also focus on more complex repairs and updates. “You know, just through the nature of the beast, there’s been some deferred maintenance, the need for improvement and to modernize. Right now, we’re able to do it safely. We have all the time in the world. And that’s through the whole system,” Valaris said.

Painters and carpenters now focus on repainting cars, repairing weather-damaged wood and restoring the few 100-year old cable cars that had been sitting in the shop. Cleaners come twice a day to wipe down the machinery, and staff focus on staying six feet away from each other when they are working.

Track maintenance mechanics, who are used to working on busy tracks, now find themselves working alone on virtually abandoned streets.

“I’ve been here 19 years and I’ve never seen it like this, ever,” said Darcus Tucker, track maintenance manager. “This is strange. This is weird for everybody, I’m sure. We’ve had closures to do retrofitting, upgrading, modifications to track and rail and inside the barn. Closures in the past have only been for five to seven days.”

Cable cars shut down due to COVID-19

SFMTA has redistributed cable car operators to bus routes, shifted focus to track repairs and car updates and cut hours in response to COVID-19. The city said all employees will be paid until at least the end of this month.

“A lot of the operators were saying, ‘Why shut down cable cars? It’s open air and you get all that flow,’” Valaris said. “Well, the proximity was the issue. It’s actually safer to operate a motor coach because you get that enclosure effect more than you do with cable cars.” No cable car workers have tested positive for the novel coronavirus, he said.

Cables used to run all day until they paused for a few hours late at night. They are now off for large portions of time, only running when someone has done a repair and needs to test it.

Prior to the lockdown, technicians would have to be present all night to monitor the switches. With the service cutbacks, most employees are ready to clock out by 2 p.m.

“If you think about the problems with the world in general with COVID-19 more so than just what we’re doing. I think we’re just happy to have jobs,” maintenance mechanic Nicasio Nakamine said.

Maintenance workers, who are still out on the city streets every day inspecting and repairing cables, have noticed a newfound appreciation from residents.

“Today, we were out there working and cleaning stuff up and the residents were coming out and thanking us. Somebody offered to buy us coffee this morning,” track maintenance worker Charles Rayo, said on April 15.

“We usually get a lot of backlash from the noise and the work and street closures and all that kind of stuff,” Tucker said. “But it is nice when a few members of the community say, ‘Hey we appreciate you,’ you know, that feels good.”

While cable cars will not be available for the public to ride until the city relaxes its shelter-in-place order, residents will occasionally see empty cable cars running up and down San Francisco streets soon, Valaris said. On Friday, the SFMTA plans to run its first cable car since lockdown to test new camera equipment.