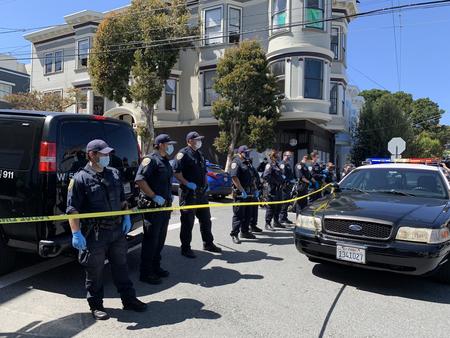 Police officers removed two women who occupied a vacant home in the Castro on Friday. Photo courtesy of Darby Thomas.

Laura Wenus, Reporter & Host for "Civic" |
LikeTweet EmailPrint More
The same day tenant advocates in San Francisco organized a car caravan demonstration calling for the cancellation of rent, two homeless women, Couper Orona and Jess Gonzalez, briefly occupied a long-vacant home in the Castro before police removed them. They are part of ReclaimSF, an organization inspired by Moms4Housing, a group of mothers who took over a vacant house in Oakland last year to protest real estate speculation. Quiver Watts, an organizer with Reclaim SF and editor of the Street Sheet, outlined how and why activists arranged for the takeover of the 19th Street house.

“They held it vacant for several years and looked to be demolishing it and turning it into this mini-mansion so that they could make a large profit off of it. We don’t think that real estate should be a matter of profit for a small number of people, but rather a resource that’s distributed to people who are in need.” — Quiver Watts