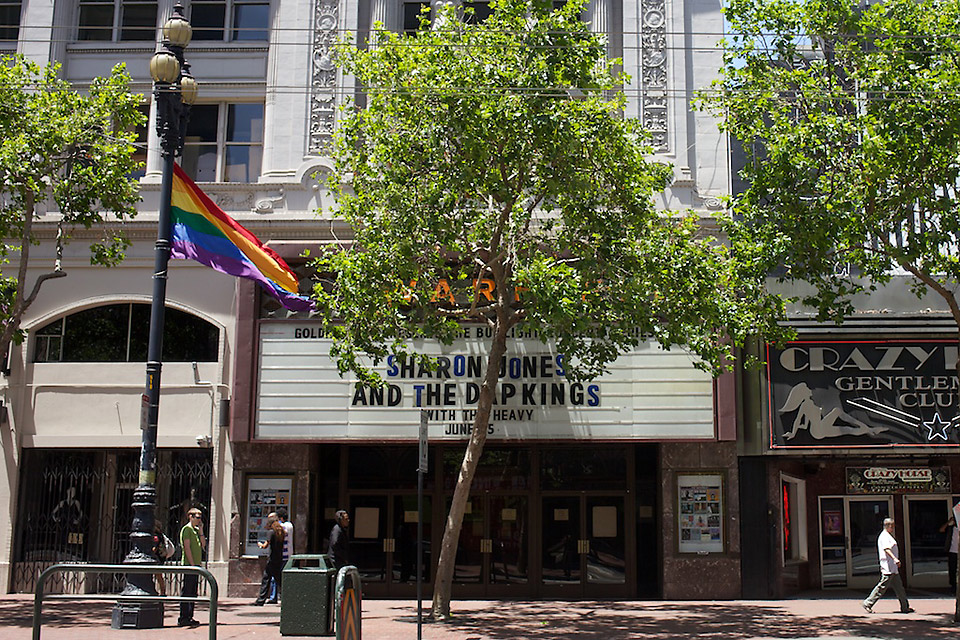 Burning Man LLC has been talking with the owner of the Warfield Building at Market and Sixth streets about locating its headquarters there, advancing the city’s plans to revitalize mid-Market with an arts district. Photo by Monica Jensen/SF Public Press.

The group that builds a temporary city of more than 40,000 creative vagabonds at the end of each summer is in talks to move into the nine-story early 20th century Warfield Building, at Market Street where Taylor and Sixth streets converge. The building is in the heart of a depressed and crime-ridden three-block zone that San Francisco has been trying to redevelop for years, and is now offering incentives to turn it into cluster of arts organizations.

Marian Goodell, director of business and communications and one of the founders of Burning Man LLC, said the organization has been looking at a number of office spaces on Market Street. She said the Warfield Building in particular has “many characteristics that we like.”

Goodell said the group has also been talking with other arts groups that are looking into the mid-Market area and that an arts renaissance there is imminent.

“We’re willing to go into a neighborhood that no one else really wants and liven it up,” Goodell said. “We’re pretty engaged. I can imagine that whatever a neighborhood might need we would be open to help.”

The group, which has 30 employees and thousands of volunteers who work on a variety of artistic, performance and media projects, would provide foot traffic and a financial boost to retail business in the area.

It would also be a destination that could bring attention to and collaborate with other arts groups moving into the area. The latest, announced earlier this week, is a $100 million theater facility that would be built down the block from the Warfiled. The proposal by the American Conservatory Theater would include a 300-seat theater to augment its Geary Street flagship venue.

“I think that having Burning Man here would be amazing,” Melchor said. “I know they are very interested in helping revitalizing the area.”

She said the group has studied how moving into the Warfield could enhance collaborations among the groups.

“They’re extremely excited about the opportunity to do it, and they see the vision,” Melchor said. “But, they have to be careful like everyone.”

Addington provided a terse response over e-mail to inquiries about the Burning Man talks. “It is a possibility,” he wrote. “As is everything else.”

San Francisco officials have provided Burning Man with logistical help. Amy Cohen, director of neighborhood Business Development for the city, said the city has actively encouraged Burning Man to move into the area.

“We are interested in anyone who can bring people into the area,” Cohen said. “There is a movement to have Market be an extension of downtown. We see a niche that is developing as a civics-oriented arts district. There’s a lot of entrepreneurial energy moving into this area and Burning Man represents this energy.”

The city’s efforts to revive the forlorn stretch between Fifth and Eighth streets have been slow to gain momentum. Last year Mayor Gavin Newsom announced an $11 million loan fund to encourage arts groups to settle in the zone. But as of last month, only one business — a hamburger restaurant — had taken the city up on the offer. Part of the problem has been that due to restrictions on federal funds, the money must be used to generate new jobs, not just relocate existing ones.

Cohen’s office has conducted walking tours of office spaces in the mid-Market area. She said she will help the group navigate complex city approvals. One way her office could help Burning Man is by speeding up the temporary arts licensing process.

Tomas McCabe, executive director of the Black Rock Arts Foundation, the nonprofit arm of Burning Man, said his group’s main focus is finding places for temporary public art on the street outside the office complex.

“I’m talking large-scale projects,” McCabe said. “One problem that cities have in putting in public art is there’s lots of bureaucracy. And sometimes after years and years of work, nothing happens.”

Temporary public art is meant to be installed for a short time and then either removed or replaced with a different installation.

McCabe used the group’s installation of Hayes Green Temple, a intricately carved wooden structure, at Patricia’s Green in Hayes Valley as a showcase of its public art installation work.

“We worked with the local community and they have started their own arts commission,” he said. “They basically curate that one spot in their park. We were the first ones to place public art there.”

He said the residents became instant art critics and have shown a strong civic interest in what is placed there.

“Its fascinating,” McCabe said. “People might not like a piece but they know it’s going to be in a few months and they can’t wait to see the next one.”

McCabe said Burning Man is now looking at ways to bring additional temporary public art into the mid-Market area. Last year the city installed several displays in the Warfield and other buildings as part of its Art in Storefronts project to spruce up the street, where dozens of storefronts have sat vacant for years.

“We’re looking at doing some window display art and refurbishing a vacant lot and turning it into a bit of an art park,” McCabe said.

The group was recently named in a National Endowment for the Arts grant to pursue this type urban art initiative.

The Burning Man offices are currently located on the edge of the Bayview district in an anonymous office park near a sewage treatment plant.

“The city would love to see us in the mid-Market area, and we love the idea of moving in there,” McCabe said. “I don’t know if it is going to happen, though it looks like it might happen. We’re already talking about the possibilities of engaging the community and getting art out.”

He said moving out of their current offices and into the heart of the city is essential for public participation. “That’s not really happening in an office park in an industrial neighborhood,” he said.

The group is considering using a storefront in the Warfield Building for a museum and cafe.

“I am not sure what it’s going to look like,” he said. “I know it will add a lot of color to have Burning Man there. People know we are here, but it is going to be really exciting for people to actually see us and know where we are.”

The Warfield Theatre, on the first floor of the Warfield Building, opened in 1922 and has been host to vaudeville shows, jazz artists and bands including the Grateful Dead and U2. Early in the last decade the building was briefly home to the San Francisco Examiner. When Addington bought it he renovated it with the intention of selling whole-floor condominiums ranging from $1.3 million to $2.5 million, with each level guaranteed access to eight tickets to Warfield Theatre productions.

Like most of the reporters my age, I came to reporting via "All the President's Men." I've alway been naturally curious. Lately, I have been focusing my reporting time on the area of medical cannabis and human trafficking.