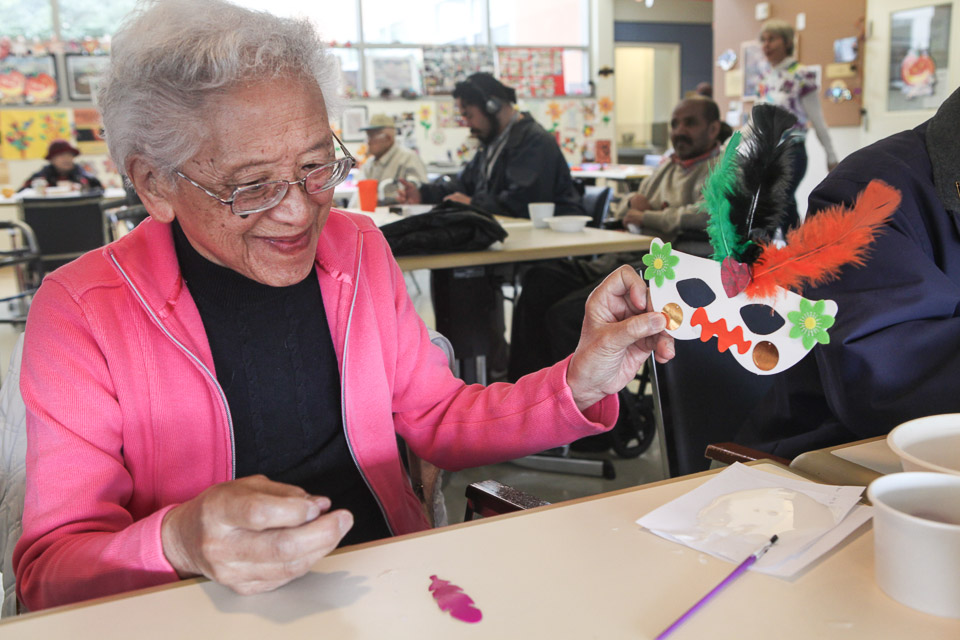 Gwendolyn Gee admires her masterpiece after decorating the mask with feathers, sequins and stickers in a City College of San Francisco seniors’ art class at the Mission Creek Adult Health Center in San Francisco. Photo by Audrey Whitmeyer-Weathers/SF Public Press

Vera Whelan, a diminutive 87-year-old, is hard at work on a white mask with pink and blue feathers on the pointed corners, and painted floral silhouettes. She used to teach arts and crafts to elementary students.

“I enjoyed watching them and teaching them — now I’m doing it myself,” Whelan says. “I think it would be nice to pay for these kinds of classes as long as some of the other seniors can afford it. We all have to do our part to keep them going.”

For Whelan and hundreds of other seniors, this City College of San Francisco class, as well as courses in music, health and literature, could be beyond the reach of many “lifelong learning” students under changes proposed by the school’s leadership.

The courses, which have been free for 30 years, could end up becoming fee-based as the college struggles to keep its accreditation by resolving looming budget deficits.

While an official plan is being drafted for noncredit classes, the standard enrollment fee is $46 per semester unit.

The cuts have caused noncredit courses to suffer a steeper decrease than for-credit classes. The implication is that lifelong learning is no longer a priority.

Because of these pressures, many California community colleges have either canceled lifelong learning courses or started charging for them. Unlike most peers across the state, City College of San Francisco has maintained about 500 of its noncredit courses for the 2012-2013 year.

Lifelong learning was a key part of the state’s 1960 Master Plan for Higher Education. Its intention was to give Californians the opportunity to upgrade their skills to qualify for jobs, learn new skills for personal enrichment and return for a degree in a new field of study.

But now there is not enough money to pay for the classes, which include English as a second language, citizenship and older-adults courses.

There are 2,900 students now enrolled in noncredit courses at City College,  including lifelong learning, and more than15 full-time professors.

A large number of lifelong learning students at City College are senior citizens.

Susan Hoffman, director of the Osher Lifelong Learning Institute at UC Berkeley, said older adults need to be engaged in the world of ideas, and interact with others.

She said a study by AARP found that seniors who participated in learning programs make fewer doctor visits and use less prescription medications.

“From my point of view, lifelong learning is an underutilized public health strategy,” Hoffman said.

Natalie Berg, who is running for re-election for the City College Board of Trustees, said one of the problems with noncredit classes such as lifelong learning, is that the school receives much less money for them than it does for credit courses.

“But we’re not going to cut them, with the population of San Francisco,” Berg said. “The ESL needs alone and the citizenship needs are much too high.”

Berg said a city as diverse as San Francisco has diverse needs, complicating decisions about what classes to cut. But she said charging fees for large noncredit classes could bring in badly needed revenue.

Berg maintained that the board would not get rid of older-adult classes, but is willing to charge for them.

The Older Adults Department offers free lifelong learning classes at City College, specially designed for those 55 and up, at more than 30 locations throughout the city.

Diane Romaine, a City College professor who for the last 22 years has taught art for the Older Adults Department, said the elderly would not be able to afford to pay for courses.

“I think it would be really sad if they do start charging for lifelong learning,” she said. “I don’t know how the Older Adult program will deal with it or if we’d get more funding.”

Romaine said the program has therapeutic value in terms of helping the elderly forget about their aches and pains.

“It gives them a lot of self-esteem, since they can’t accomplish much in their lives anymore,” she said. “So many things are closed to them.”

Whelan, who has been taking Romaine’s class for more than three years, said the seniors are torn about the possibility of having to pay.

Another student in the class, Gwendolyn Gee, 89, majored in music and graduated from City College 40 years ago.

“I was never very good at art, but lately I found a lot pleasure in it,” Gee said. “I don’t think they should charge for these classes, but I understand that young people have to come first.”

The Legislature has recommended that schools that want to keep lifelong learning courses reclassify them as “community service” classes.

Like lifelong learning, these courses are noncredit, but they do cost money. While the college is prohibited from profiting from them, it can charge for the costs of the instructor, room rental, heating and maintenance.

City College still receives state funding for lifelong learning and other free noncredit courses. But that will end if it decides to reclassify them as fee-based classes. The school’s current budget for noncredit courses is $590,000.

Many colleges have converted to community service classes, said Rita Mize of director of State Policy and Research at the Community College League of California, a nonprofit organization based in Sacramento.

Hoffman said the question of fees, and the ability of low-income students to pay, cannot be separated from the question of how the state or city provides necessary social supports for the community.

“The relentless attack on public education puts educational institutions in impossible situations: charge fees or drop programs,” she said. “It’s a terrible choice, and no college should have to make it.”

The state has been struggling with budget deficits for years, and has not been able to get approval for any tax increases thought the Legislature.

Mize said that was the reason for placing Proposition 30 on the Nov. 6 state ballot. It  aims to increase funding for education in the state and would restore $10.3 million to the City College budget.

“Prop 30 would give us a lot of stable funding,” Berg said. “This ballot is important because it is statewide.”

But Prop 30 will not cover all the funds California community colleges have lost, which was $809 million. Lifelong learning and other noncredit classes will still be on the chopping block regardless of the election’s outcome, Mize said.

Measure A on the San Francisco ballot would give the college $14 million annually for eight years if voters approve it.

Lissette is currently a senior at San Francisco State's journalism program. She enjoys writing about various topics, including health, politics, and business.