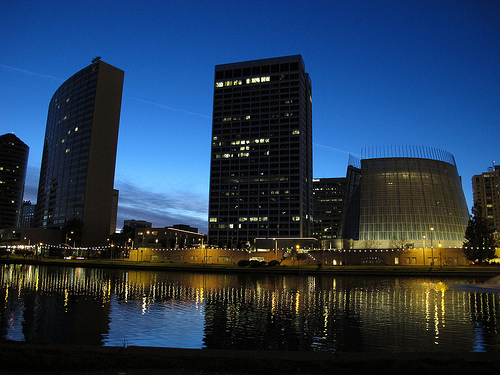 Interview by: Michael Krasny, edited by  Jaena Rae Cabrera
The following is a condensed transcript from “Oakland’s Black Flight,” a KQED “Forum” episode hosted by Michael Krasny. On July 7, he interviewed Angela Glover Blackwell, founder and CEO of PolicyLink; Allen Fernandez Smith, president and CEO of Urban Habitat; Malo Hutson, assistant professor of city and regional planning at UC Berkeley; and Margaret Gordon, Oakland Port commissioner, co-director of the West Oakland Environmental Indicators Project, about this decline and what it means for Oakland.

Oakland remains the largest African American city in California after Los Angeles. In the last decade, however, the city has had a net loss of 33,000, nearly a quarter of its African American residents. This decline is part of a larger trend seen across cities nationwide.

Michael Krasny: Who is leaving, why and where are they going?
Malo Hutson: What’s happening in Oakland is what is happening across the United States. Blacks are leaving for the suburbs. If you look at the data, it is working professional and working class blacks that are leaving major metropolitan areas. Thirty-three thousand have left Oakland in the last decade, and many of them are going to outlying areas such as Antioch, Brentwood, Oakley and other suburban areas.
Krasny: In Oakland specifically, you have a lot of whites moving into West Oakland and in East Oakland, you have a lot more Latinos moving in.
Hutson: Correct. As you’ve had roughly a quarter of blacks leave Oakland, you’ve had roughly an 8 percent rise in whites and Asians who have moved in the last decade and Latinos up 13 percent.
Krasny: Let’s get the reasons why. A lot of it has to do with affordable housing.
Allen Fernandez Smith: What we’ve been seeing is that affordable housing has been a big pull factor for people to leave Oakland. Affordable housing is one of those indicators that is important for our low-income communities and communities of color.
Krasny: And crime?
Smith: Crime is up there, too. One of the things we’re seeing with Oakland is that public safety is a huge indicator as to why people would leave. Everyone wants their families to be in a safe place, and unfortunately, sometimes it doesn’t happen in many of our Oakland neighborhoods.
Krasny: There’s kind of a reverse migration isn’t there? We’re seeing blacks from the North heading South again.
Angela Glover Blackwell: Black people have had a tough time in this country and they have had a particularly tough time in the downturn of this economy, and many African American families, particularly those with a few resources, a house they could get something out of, skills that allow them to have some mobility have just said “enough.” They have relatives and friends who have made that move and say “Come on down.”
Krasny: Why are a lot of people leaving now?
Margaret Gordon: There’s a lack of jobs, affordable housing, the crime, lack of education and resources. It’s been a combination of complex issues of disparity that nobody really addresses. This migration of African Americans out of the inner city has been happening for 30, 40 years now.
Krasny: There was supposed to be a renaissance in Oakland, are we seeing the decline of that now?
Hutson: On one level, we’ve seen people moving back to cities. You have two things happening: you have outgoing of blacks in the Bay Area, but you have an increase of other ethnic groups into major cities.
Krasny: Wealthy in the cities and poor on the outskirts, is that how things are divided now?
Blackwell: It is not a sustainable model. Oakland, even though it is losing a substantial portion of its African American population, 26 percent of the population is white, 27 is black, 25 is Latino, 17 percent is Asian. This is probably still the most integrated city in the nation. Let Oakland be the model where all can participate and prosper.
Krasny: Is there a lot more tension in the suburbs now?
Blackwell: We have been a nation where people who were poor and people who were middle class lived together. The interaction of people who were middle class with those who weren’t gave those who weren’t a chance to see what it was like to have a better life. This notion that somehow poor black children don’t want to do well in school and better their lives is a false notion. But if they don’t see that, if they don’t see the path and they are isolated in every way, it’s not likely to happen.
Krasny: Malo, is this not as racial as we are making it out to be?
Hutson: I think there is still the racial component, but if cities are going to continue to be successful, they need to figure out how to support the middle class. If you look at our current economy, the middle class is really suffering. If we are looking at raising taxes and having revenue to support our schools, support our police, then we have to create an environment where the middle class can live and support themselves.

This interview appeared as part of 2010 Census: Our Changing Communities on Forum at KQED.

This appeared in the fall print edition of the SF Public Press.