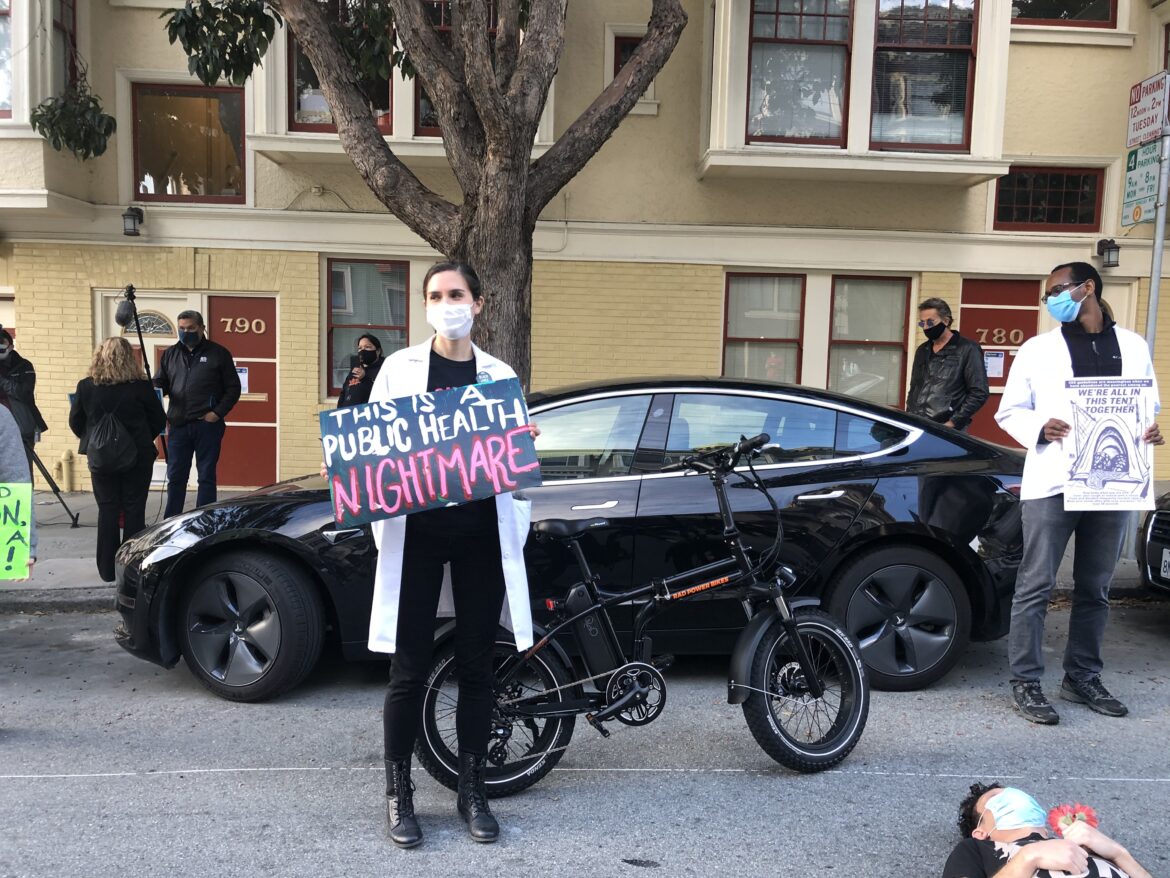 As cases of COVID-19 surge in San Francisco, advocates question whether the city can prevent another outbreak in homeless shelters. Between June 30 and July 31, confirmed cases among homeless people more than quadrupled from 16 to 78.

But as the delta variant of the coronavirus sweeps across the city, there is a growing shortage of safe places for homeless people to go.

Five shelter-in-place hotels, where people with medical vulnerabilities have been able to safely quarantine since the pandemic broke out, will shutter by the end of August. At the same time, the city’s highest-capacity shelter, where people sleep on cots or bunk beds in large rooms, has paused intakes for weeks due to positive tests from residents. And sweeps of homeless encampments have continued, despite guidance from the federal Centers for Disease Control and Prevention that “communities should allow people living unsheltered or in encampments to remain where they are unless individual housing options are available.”

“This far into the pandemic we shouldn’t be repeating early pandemic mistakes,” said Jennifer Friedenbach, executive director of the Coalition on Homelessness. “Especially with how contagious the delta variant is, we absolutely must ensure all San Franciscans can stay safe, avoid congregate living, and have the opportunity to shelter themselves.”

With 77% of its eligible population vaccinated, San Francisco has one of the highest vaccination rates in the country. However only 39% of homeless residents  are fully vaccinated, according to estimates from the city’s Department of Public Health. Forty-five percent of homeless individuals have received at least one dose.

In response to positive cases, city halts intakes at shelters

The city currently has 1,119 beds for adults and youth across the city, including navigation centers, according to the Department of Homelessness and Supportive Housing. In June, as the city relaxed its COVID-19 protocols, it closed Moscone West, a 150-bed emergency shelter opened in April 2020. That same month, San Francisco added more than 150 beds to other shelters.

The Department of Public Health refused multiple requests to disclose data on positive COVID-19 cases in two of the city’s largest group shelters over the past three months.

However, five of the 78 positive COVID-19 cases among homeless people in July occurred at Next Door, a large group shelter on Polk Street, said an employee who wasn’t authorized to speak to the media. New intakes at the shelter were paused for two weeks, pending new diagnoses, as city protocol dictates. As of Aug. 17, the shelter’s 181 available beds, representing just 54% of its pre-pandemic capacity, were still locked down.

MSC South, the site of a large COVID-19 outbreak in April 2020 in which 92 residents and staff tested positive, has 168 beds available, bringing it to 49% of its pre-pandemic capacity. It has also paused intakes after positive COVID-19 cases emerged at the shelter, the Department of Homelessness and Supportive Housing said this week.

The homelessness department said it defers to the Department of Public Health to determine what threshold to set in limiting shelter capacity, though no specifics were provided.

“This is a really scary time with the delta variant,” said the homelessness department’s Director Shireen McSpadden during an Aug. 2 Local Homeless Coordinating Board meeting. “The balance is really a challenge. The information changes weekly, so we have to remain nimble in our shelter reopening process.”

Other shelters across the state are dealing with larger outbreaks. On Aug. 13, 37 people tested positive for COVID-19 at a shelter in Venice, Calif., spurring a lockdown.

“Congregate shelter endangers the lives of our unhoused community members in the face of the delta variant, which is even more transmissible than the virus we dealt with last year and can spread even amongst vaccinated people,” said Dr. Rupa Marya, associate professor at the University of California, San Francisco.

That sentiment was echoed by Dr. Margot Kushel, director of the UCSF’s Benioff Homelessness and Housing Initiative, who has personally hit the streets to administer vaccines.

“The truth is that — despite efforts — a relatively small proportion of people experiencing homelessness are vaccinated,” she told the Public Press. “I do think that non-congregate shelter is a really important intervention. It has been throughout the pandemic and with the virulence of the delta variant is, arguably, more so now.”

Even as congregate shelters halt new admissions, other resources for homeless people to sleep indoors are disappearing. Shelter-in-place hotel rooms, which opened across the city in April 2020, have begun shutting down. The Diva Hotel closed Aug. 1 ahead of its conversion to permanent supportive housing, and more than 100 homeless residents are scheduled to be moved out of the Union Square Hotel, the Tilden, the Epik and the Chancellor by the end of the month.

Advocates for the homeless question why these closures are happening even as delta-variant cases surge and funding has been extended. On Tuesday, the Biden administration announced that it would extend some COVID-19 emergency funds through the end of the year, including resources for non-congregate shelter for homeless people.

On Tuesday, Friedenbach appealed to the city in a letter, asking for an extension of the program. “They could be moving people in hotels that qualify for housing into housing, and filling those empty beds with folks out on the streets — all covered by the federal government,” she told the Public Press.

Kushel noted that the city may feel a reluctance to bring more people into the hotels if they didn’t feel like they had the resources to permanently house everyone afterward — but believes the risk is worth the investment.

“I would hope that we don’t let perfect be the enemy of the good here,” she said. “Getting people into safety is important for all.”