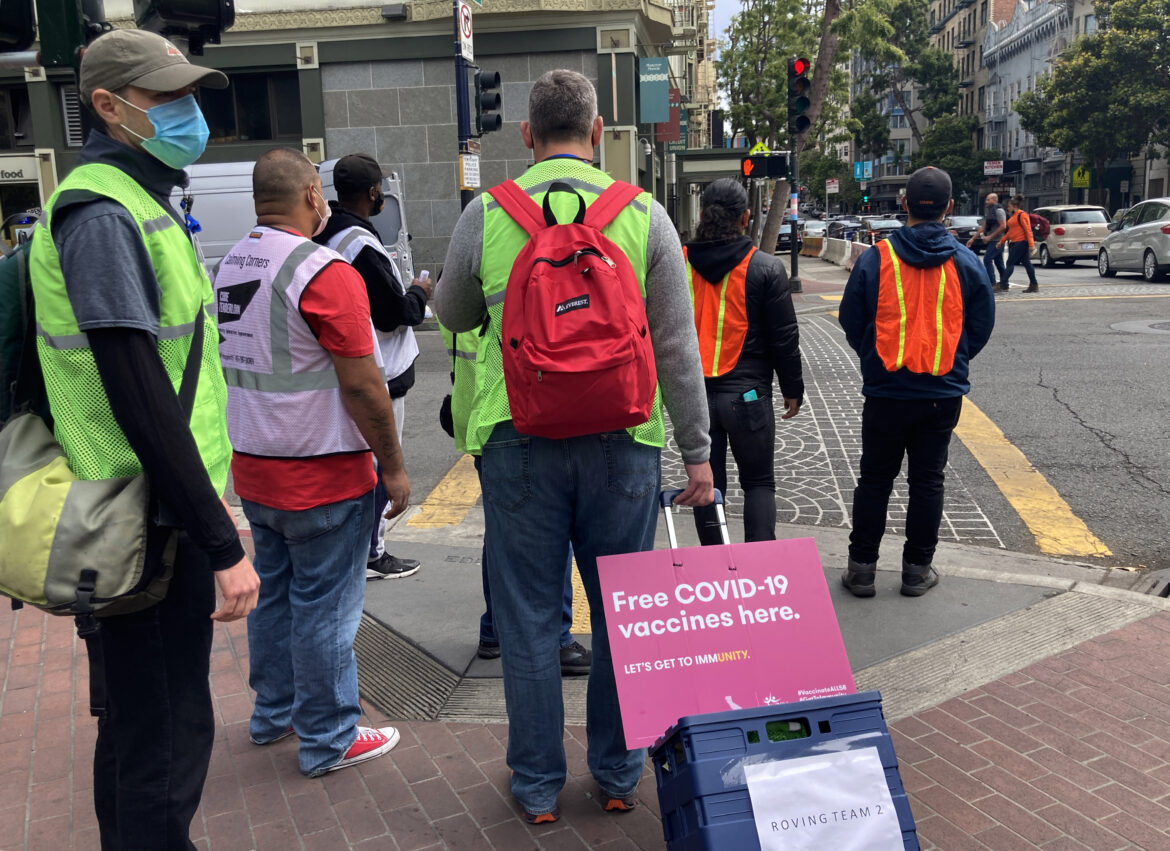 On a chilly summer afternoon in the Tenderloin, Donna Hilliard offered a person sitting on the sidewalk a coronavirus vaccine.

“Hey, how’s it going, honey? Have you been COVID vaccinated? We have it here,” Hilliard said.

“My name’s Donna, by the way. I don’t think I’ve seen you here before.”

The majority of San Francisco residents have gotten vaccinated against the coronavirus. But a lack of trust in the health care system or trouble making an appointment or going to a vaccination site may still pose barriers for some, especially people experiencing homelessness. Hilliard is the executive director of Code Tenderloin, an organization that offers a variety of services and classes to people in the Tenderloin struggling to stabilize their lives. During the pandemic, Code Tenderloin has distributed everything from water to masks to food. With the arrival of the vaccine, they have collaborated with health care providers from the University of California, San Francisco and the nonprofit service provider Glide to try to overcome those barriers by walking the streets, offering immunizations on the spot.

The person Hilliard had encountered didn’t seem interested, so Hilliard moved on.

Follow along with this outreach work on a recent episode of “Civic:”

That afternoon, Hiliard would encounter many others whom she already knew or who had already accepted a vaccine from the outreach workers. Some were eager, some needed convincing, and others will never take the vaccine. The key to making immunization attractive to those who can be convinced is approaching with respect, Hilliard said.

“It’s not about the marketing and the flyers that are put out there. It’s about being real and authentic to the person you’re talking to,” she said. “And don’t just be like, ‘You want to get vaccinated?’ and they say ‘no,’ and that’s it! Like, why? Ask why. Everyone has a ‘why.’ So it’s finding out that ‘why.’ And I’ll tell you, we’ve been able to get a lot more people vaccinated just by asking why.”

Code Tenderloin outreach workers also have experience with the conditions that Tenderloin dwellers they contact are living in.

“We represent prison background, we represent alcohol, all that stuff, anything that made up the community, we talk that language,” said Elgin Rose, senior program manager at Code Tenderloin. “I ask anybody, no matter what state of being, ‘Can I help get you vaccinated?’ Because most of the time people don’t really realize the value in it, or there’s other stuff going on, so: ‘Why would I get a vaccine today? I haven’t even eaten today, so why is that a priority again?’”

This is why UCSF health workers have asked Code Tenderloin to take the lead in the outreach work, said Dr. Margot Kushel, a physician and researcher who directs the UCSF Benioff Homelessness and Housing Initiative.

“I can’t emphasize enough how much our efforts were led by Code Tenderloin, who really in the Tenderloin is seen as a very trusted entity. They know the community. They’ve been there, they get it.”

Hear more about building trust to help get people vaccinated from Dr. Margot Kushel on a recent episode of “Civic:”

Not everyone who benefits from the roving vaccine teams is homeless, however. Some, from construction workers to shopkeepers, feel they can’t leave or take a day off to get vaccinated.

“We’ve been able to go into stores like some of these liquor stores, smoke shops, restaurants, and go in and bring the vaccination to them. And they’re like, so grateful and so happy because they really want it, they just couldn’t leave their store to go get it,” said Hilliard. “Sometimes we’ll go in and we’ll ask the person that’s at the front, and then they’ll bring out four or five family members.”

Another key is repeating the offer, Kushel said.

“One thing I really want to emphasize is, someone saying ‘no’ once does not in any way mean that they’re not going to say ‘yes’ the next week or two weeks later,” Kushel said. “So we just need to keep asking and offering and making this extremely accessible.”

That was the case for Tyrone Dotson, who accepted a shot when the Code Tenderloin team offered it.

“I didn’t know what I was going to do, you know? And I was booked,” said Dotson, who spends most of his time on the Tenderloin streets near Market Street. He said he had been hoping to get a shot since it first became available, but when it came to medical centers and making appointments, his experience was “waiting in line, waiting for them to call me. And they ain’t called me yet.”

Dotson said he was happy to finally have the shot. On the roughly three-hour outreach shift that found him, workers administered 23 vaccines.