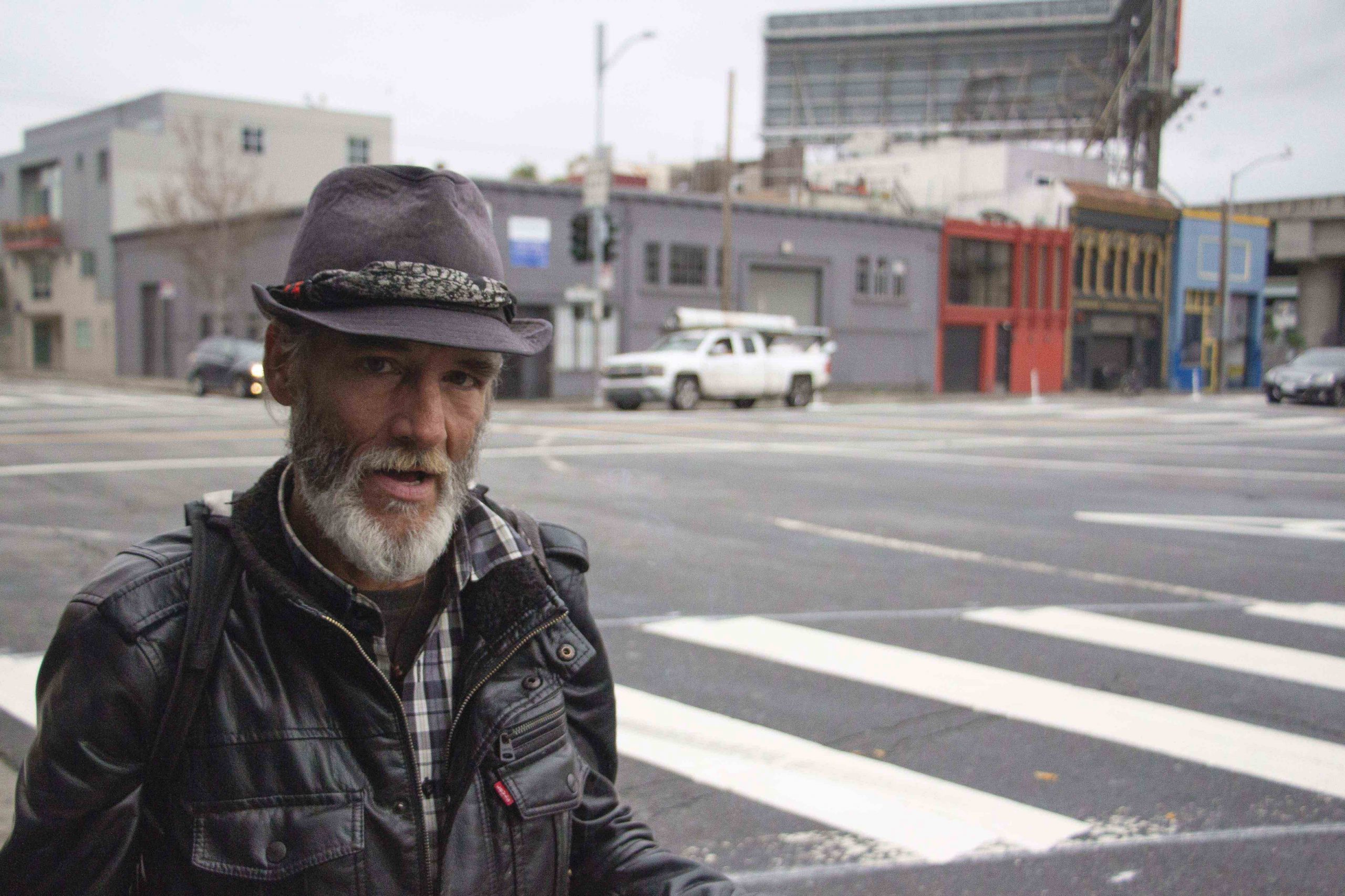 City Hall has announced plans to move people from the streets into shelters during the coronavirus pandemic — amid concerns from some homeless people, social workers and public health experts that shelter conditions may actually accelerate the virus’ spread. On March 18, Douglas Willis stood outside MSC South, San Francisco’s largest shelter, waiting to be admitted. Photo by Brian Howey / Public Press

Brian Howey, Reporter |
LikeTweet EmailPrint More
Standing outside San Francisco’s largest homeless shelter on a brisk and cloudy Wednesday morning, Douglas Willis said that he had been waiting on the street for hours to be admitted to the shelter, and not for the first time in the midst of the coronavirus pandemic. He and his partner, Katja Henschel, had waited in the rain twice in the last week, he added.

Staff at the shelter, called MSC South, had distributed hand sanitizer, but social distancing was impossible between the cramped beds of the “very crowded” shelter, he said. In addition, staff hadn’t informed residents of any plans for how to handle a situation where someone in the shelter tests positive for the virus, he said.

Willis said he fears Henschel — whom he hopes to marry soon — will not fare well if she catches the virus because she suffers from heart issues. “I am afraid,” Willis said. “I’m not panic-scared, but I am concerned. I’m concerned about catching anything.”

Willis and several other residents report that even with a stay-at-home order aimed at preventing the spread of the virus, emergency shelters have been slow to enact preventive measures and effectively share information about best health practices for those living in shelters.

In fact, the city’s plan to move people living on the street into emergency homeless shelters could increase the chances of an outbreak inside those facilities, say public health experts, social workers, and homeless shelter residents.

At MSC South, in the South of Market area, “you have 200 people bunked on a single floor with less than three feet between each bed,” said Chris Herring, a Ph.D. candidate in sociology at the University of California, Berkeley who has worked with homeless San Franciscans for several years. “There’s no way to social distance with their current space.”

Herring wrote a widely distributed social media post suggesting that healthy residents may be better off sleeping outdoors in a tent than in a shelter. The city should “distribute tents, offer those who are able and willing [the opportunity] to go on the street and camp, for the safety of others,” he said in a phone interview.

Rhorer said his agency’s top priority was to place unhoused people who had been exposed to or tested positive for COVID-19 in one of more than 500 rooms that officials planned to rent from hotels by the end of the week. Second priority would be to thin the city’s emergency shelter population and place those people in “congregate settings”: churches, schools, and other public buildings where the city can house the homeless and monitor their health.

One of the Department of Public Health’s biggest concerns is the coronavirus “ripping through” single occupancy hotels, where formerly unhoused people stay, and homeless shelters, Rhorer said at a San Francisco Board of Supervisors meeting Monday. “That threat, per the Department of Public Health, is more imminent than a threat of people being more dispersed on the street,” he said.

Despite that threat, the agency plans to act on its third priority, moving more homeless people into shelters.

The Department of Public Health did not reply to requests for comment in time for publication. Representatives for the Department of Homelessness and Supportive Housing said that the agency was stretched too thin during the crisis to respond immediately. The Department of Emergency Management recommended a visit to Thursday’s press conference for clarification.

Lack of training for shelter residents

A representative from MSC South said it had increased the number of cleanings and planned a meeting with officials to discuss additional training and information distribution for shelter residents.

“Two to three times per day, we wipe down the whole facility,” shelter representative Shari Wooldridge said. She added that staffers had posted signs instructing residents to wash their hands and residents had been instructed to stay as far from each other as possible. However, beds in the shelter are currently “a good two feet apart,” she estimated, much closer than social distancing recommendations call for. “We’d have to take beds out if we did six feet,” she added.

The Human Services Agency had not contacted her about moving vulnerable residents into newly acquired congregate settings, she said.

A resident of the Dolores Street shelter who asked not to be identified because the person didn’t want to compromise their ability to stay in the shelter by complaining publicly said shelter staff there had not provided any information about social distancing, hygiene or other public health best practices, nor had they received any information about whether the city plans to move them into a new shelter. Dinner tables had been moved several feet apart, the person noted, although each table still seats several people close to one another.

A health department poster listed information about the virus and hygiene practices in several languages, the resident said, but symptoms were not listed and staff had not discussed the information with residents. “I guess it’s one of those things that’s kind of understood,” the person said.

A Dolores Street shelter representative did not immediately return requests for comment.

“The congregate living space is basically an incubator for infection,” said Ben Baczkowski, an advocate at the Eviction Defense Collaborative, who spoke based on his experience working with shelters but not on the collaborative’s behalf. The collaborative works with residents and shelters to resolve disputes. The heightened potential in shelters to spread the virus made them comparable to refugee camps and detention centers, he said. He added that staffers had told him shelter inaction was a result of vague recommendations from the city on how to roll out preventive measures such as expanding the distance between beds.

“Without an alternative placement for people in the shelters, the best we can do is to sanitize and encourage people to use good health practices,” he said. “But that’s not enough.”

Baczkowski praised shelter staff and city outreach workers for doing all they could “at great personal risk to themselves,” but based on his knowledge of shelter policy and his own observations from working inside shelters, said the city wasn’t pushing fast enough to get people into hotel rooms.

Dr. Colette Auerswald, an associate professor at the UC Berkeley School of Public Health, said the city’s decision to procure hotels for sick and exposed patients was “absolutely appropriate,” and stressed the importance of keeping coronavirus-positive residents separate from healthy shelter residents.

Generally, having shelter is better for unhoused people, she said. But if procedures and conditions for shelter residents haven’t changed since this crisis began, the city is going to have a major issue on its hands, she warned.

“All of this falls apart unless we have staff training, unless clients are being educated, unless the resources and equipment are available,” Auerswald said. “We urgently need to be sure that staff know how to keep clients safe and to keep themselves safe.”

In a Wednesday coronavirus update, Gov. Gavin Newsom announced that as many as 60,000 homeless Californians could catch the virus, according to modeling that assumes a 56% infection rate.

District Six Supervisor Matt Haney, who has been vocal in his opinion that sheltering homeless people who live on the street should now be one of the city’s top priorities, wrote in a Twitter direct message that his focus was on getting hotel rooms secured for all of those who are unhoused and making sure the “still unhealthy” shelters become “much more prepared than they are now.”

The San Francisco chapter of the Democratic Socialists of America announced Thursday that it would begin distributing tents to unhoused people on the streets.