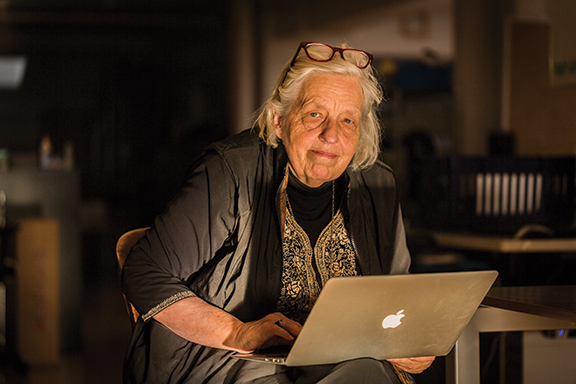 Under Sandy Close’s leadership, Pacific News Service practiced “journalism from the inside out” by bringing people from many cultures into the newsroom. The San Francisco-based news service and its successor, New America Media, closed on Nov. 30. Photo by Eric Kayne/California Health Care Foundation

When Sandy Close recruited a young African-American rapper to her news organization, Pacific News Service, his first assignment was to write about Cantopop, popular music that swept Hong Kong and overseas Chinese communities in the 1980s and ’90s.

She also asked a 16-year-old Afghan refugee to hang out with Salvadoran immigrants in San Francisco’s Dolores Park and write about why they joined gangs.

Close has made it her life’s work to find and amplify unique voices from different ethnic communities, especially those of the young. She’s especially fascinated by the complexity of relationships between people of different cultures.

For 48 years, Pacific News Service practiced “journalism from the inside out” by bringing people from many cultures into the newsroom. They debated the issues of the day in lively editorial meetings and then wrote about them in news features and essays that circulated to more than 100 newspapers.

On Nov. 30, Close shuttered the news service and its successor, New America Media, a multimedia ethnic news agency and coalition of ethnic media organizations founded in San Francisco in 1996. Their legacies will live on through the work of dozens of professional journalists who got their start with Close, and through the continued vitality of youth-run media organizations she helped spawn. Youth Radio, an Oakland-based production syndicate, trains reporters and brings their work to public radio listeners across the country. Youth-run publications Silicon Valley De-Bug and the Richmond Pulse, operating in print and as multimedia websites, cover their communities through the eyes and words of young people. The Beat Within gives voice to 5,000 incarcerated youths in juvenile halls across California.

The demise of Pacific News Service was due in part to its own success. As New America Media, it had grown greatly in recent years, bringing some 3,000 ethnic publications into its orbit by hosting forums and briefings on critical issues, conducting trainings and acting as a clearinghouse for shared news articles. At its peak, in 2012, New America Media had 90 employees in San Francisco, Los Angeles, New York and Washington, D.C. By the end, after losing several large grants, it was down to 15, all of whom have found new positions.

“If I’d been smarter on the financial management, maybe we could have avoided closing,” Close said in November, sitting in the organization’s San Francisco offices on Ninth Street, amid rows of empty desks and boxes ready to be packed.

Close was a genius, though, at fostering intellectual ferment and creative tension by bringing together people from disparate backgrounds and challenging them to think deeply and write clearly. In 1995 she received a MacArthur Foundation “genius” fellowship and used the $500,000 grant to fund a documentary on a Berkeley journalist and poet who was confined to an iron lung. “Breathing Lessons: The Life and Work of Mark O’Brien” won an Academy Award in 1997.

Close came to the news service a few years after her husband, Franz Schurmann, a sociologist and historian at UC Berkeley, and Orville Schell, a journalist and China scholar, founded the service in 1969 to produce deeper reporting on the war in Vietnam. By then, she had served as Hong Kong editor for the Far Eastern Economic Review and co-founded a newspaper in Oakland, The Flatlands, which focused on poverty, displacement and police brutality.

After the United States withdrew its military from Southeast Asia in 1975, Close turned her attention to the wars in Central America and to the ways that immigration was changing communities across California and the country.

She soon began recruiting young people, starting a Youth Voices page in the old Hearst-run San Francisco Examiner, and later a standalone publication called YO! — Youth Outlook. At the time, crack cocaine was ravaging inner cities and young black men were being labeled as predators.

“I wanted kids who had that stigma to realize they could also have a voice,” Close said.

In those days, Charles Jones sold drugs on Market Street and composed rap poetry. In 1995, a friend of his, a fellow dealer and writer, brought Jones to a news meeting. He sat in, then came to a few more. One day, he passed a gathering that turned out to be the funeral of a friend who’d been murdered. He attended the service and then went to the office. Close encouraged him to write about his feelings. His first article, “Eulogy for a lost friend,” was published in YO! and newspapers nationwide, including the San Francisco Chronicle.

In 2012, Jones wrote another story about the murder of a young man titled “Mourning a Hustler Who Was Also a Saint.” This time, it was about his brother.

For Jones, having his writing be both validated and challenged by Close and other women in positions of authority at the news service was transformative. “It changed me,” he said. “It bettered me as a person, not just a writer. I gained respect for women, gay people, transgender people.”

Today, Fariba Nawa, who interviewed gang members as a teenager in Dolores Park many years ago, is a widely published correspondent based in Istanbul. She lauds Close for her unwavering support and tough editing.

“The people Sandy supported and advised are still producing the kind of work she taught us to produce,” she said. “I have this inner voice in my head: ‘Would Sandy like this? Would Sandy approve?’”

As the end came to the organization she’d spent much of her life running, Close worked hard to make sure that people still working for her found new jobs and that the projects she’d helped launch would continue through other organizations. She’s also pleased that the hundreds of ethnic media organizations she worked with are looking for new ways to collaborate.

Editor’s note: On March 27, the Northern California Chapter of the Society of Professional Journalists presented Sandy Close with its Norwin S. Yoffie Award for Career Achievement at the James Madison Freedom of Information Awards dinner. Close’s award is named in memory of Norwin Yoffie, the former editor of the San Rafael Independent Journal, a co-founder of SPJ NorCal’s Freedom of Information Committee, and a staunch advocate for transparency. Find the complete list of winners here.