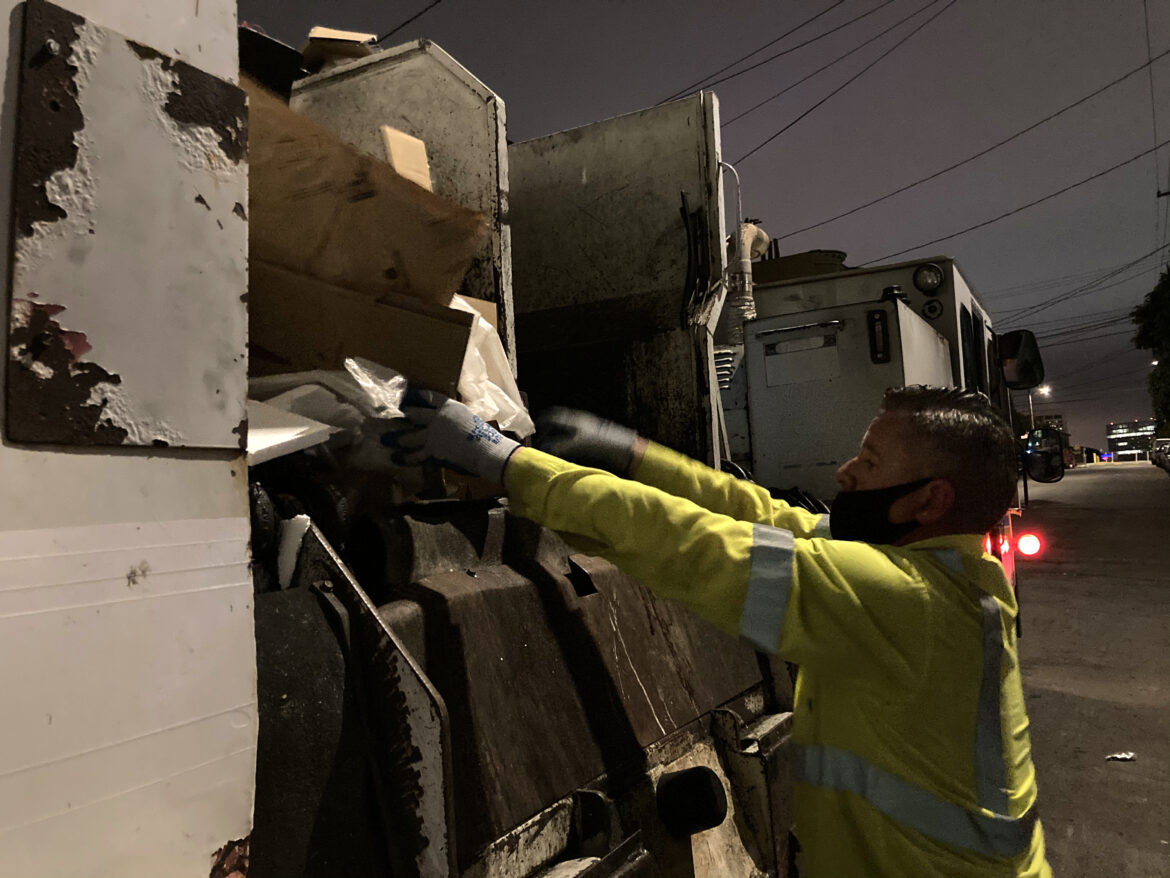 Recycling driver Gareth Willey ensures that cardboard is properly loaded into his truck.

With a holiday coming up that usually involves a lot of boxes, we thought this would be a good time to return to the topic of recycling. This article is adapted from a recent episode of our podcast “Civic,” which revisits material from two prior shows. Click the audio player below to hear the full story, and see the original stories here and here.

On a chilly and still dark spring morning, just before 5 a.m., Recology recycling driver Gareth Willey was working up a sweat. He is a recycling driver for Recology Sunset Scavenger and was coming to the end of his Tuesday route in a residential neighborhood. “Civic” was hitching a ride to get a sense for the job and how it has changed during the pandemic.

“It’s the cardboard that’s killing us,” Willey said. “It just makes this job so much more difficult.”

Some customers had their boxes broken down and neatly bundled, which helps, he said. But on some of his runs, he would open a door to a basement and find boxes piled high and would have to figure out a way to get all the material out to the street and into the truck.

On the flip side, so many people working from home meant traffic had reduced significantly. And crowded streets are a problem for the driver of a massive garbage truck.

“That’s one of the quieter streets, the one I met you up on. There is some traffic, especially on the side streets, but it’s not unbearable. But pretty much the rest of my route is — it’s like a war zone,” Willey said, on the way to the freeway. His route complete, he now needed to get to the recycling facility where he would empty the truck. The predawn streets were already clogged with commuters.

At the facility, truck after truck dumped collected material onto a tipping floor, where it was scooped into a machine that fed items into a system of conveyor belts three stories high. Human and machine sorters carefully picked through the material.

In recent years, the mills and foundries that receive recyclables from Recology have stopped accepting bales of material with more than 1% impurities. The sorting facility must work to a very high standard to prevent contaminants from being compressed into bales with recyclables.

Plastic bags are a contaminant. And despite their short useful lifetimes, they are stubbornly persistent in the environment and in the sorting facility — bags and films can wrap themselves around sorting equipment. Currently, as workers pull them from the recycling stream, plastic bags are sent to landfill. Often, they are soiled with food or other liquids, or used to hold other kinds of recyclables.

Nonetheless, the city asks that consumers place clean, dry and bundled plastic bags in blue bins. That’s because for a brief time, there was a buyer for them, and there could be a market for them again in the near future. If a buyer is found, residents should already be accustomed to placing their bags in the recycling, rather than in the trash where they have no chance of being diverted from landfill.