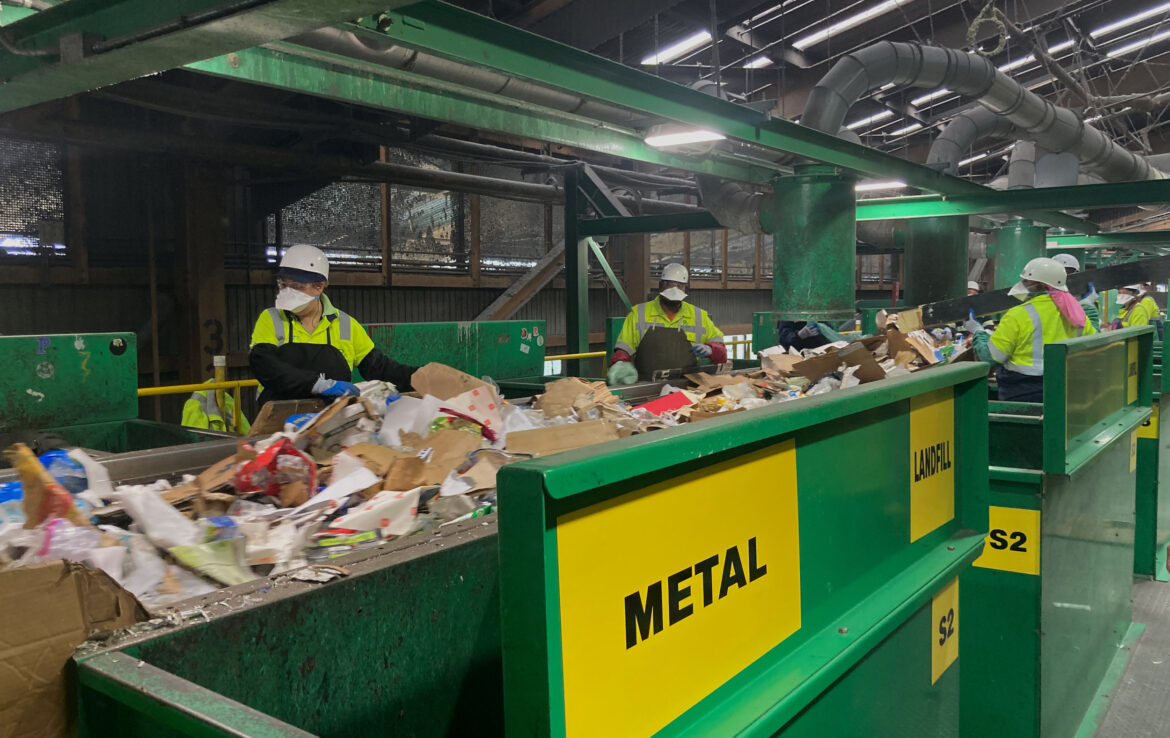 Workers at the initial sort deck inside Recology’s sorting facility at Pier 96 in San Francisco pluck items that cannot be recycled or pose a threat to equipment from a conveyor belt.

Before 2019, bales of recycling in the United States often had up to 5% impurities. China was the biggest receiver in the world of bales of recycled materials at the time, but announced it would no longer accept foreign waste.

“When you lose your biggest customer, in any endeavor, it really changes the whole playing field. And what happened was, that shifted a lot of power to paper mills and foundries and other factories that are part of the supply chain,” said Robert Reed, public relations manager for Recology’s recycling and composting programs in San Francisco. “If cities don’t meet the 1% standard, for less than 1% impurities in finished bales, then the paper mills and the other factories that receive baled recyclables will no longer buy them.”

Recology is meeting that standard at its San Francisco facility, where it sorts 500 tons of material a day into 14 different recyclables. That takes work, key parts of which are still done by people even as the company has invested millions into machinery to help. At the initial sort deck, workers stood on either side of a conveyor belt that moves a mix of materials along at about two feet per second. They pulled out unexpected items like foam floor tiles, an entire bicycle wheel, and a pair of jeans that could wrap itself around sorting equipment down the line. Some items placed in the bins are dangerous, like a large, splintered piece of wood and a twisted piece of metal.

Damon Wilson, a sorter, has seen some alarming discards make it to the sorting center, including trees, batteries and syringes. The former can start fires, and the latter pose a hazard to workers’ hands.

“A lot of coworkers have gotten pricked and stuck by it. And you never know what needle did it because there’s so many,” he said. “It’s a dangerous situation. But that’s something that we need help on from our community as well.”

It may take some sleuthing to figure out what goes where. Fabric, for example, shouldn’t go in the blue bin. Recology has done a few pilot programs, but fabric often consists of mixed types of fibers. It might have buttons, zippers, or other elements attached. It could be damp or otherwise contaminated. At the moment, it goes in the trash. Wire hangers from the dry cleaners should be collected and brought back to the business, Reed said. Shredded paper, recently deemed a contaminant by paper mills, must be collected and sealed (in a paper bag) before it can be recycled.

Plastic bags are also a contaminant. And despite their short useful lifetimes, they are stubbornly persistent in the environment and in the sorting facility — bags and films can wrap themselves around sorting equipment. One machine is shut down regularly so mechanics with box knives can cut plastic bags out of it. There are even efforts to remove them from bales of compressed recyclables.

Currently, as workers sort them out of the recycling stream, plastic bags are sent to landfill. If they are soiled with food or other liquids, or if they are used to hold other kinds of recyclables, they are trash. Nonetheless, the city asks that consumers place clean, dry and bundled plastic bags in blue bins. That’s because for a brief time, there was a buyer for them, and there could be a market for them again in the near future.

“It’s an evolving market out there,” said Jack Macy, general waste senior coordinator for the San Francisco Department of the Environment. “At this point, it’s the toughest material that we tell people to put in to be able to be recycled. But you know, we don’t want to change that message, given that the market’s continued to evolve.”

If a buyer is found, residents should already be accustomed to placing their bags in the recycling, rather than in the trash where they have no chance whatsoever of being diverted from landfill.