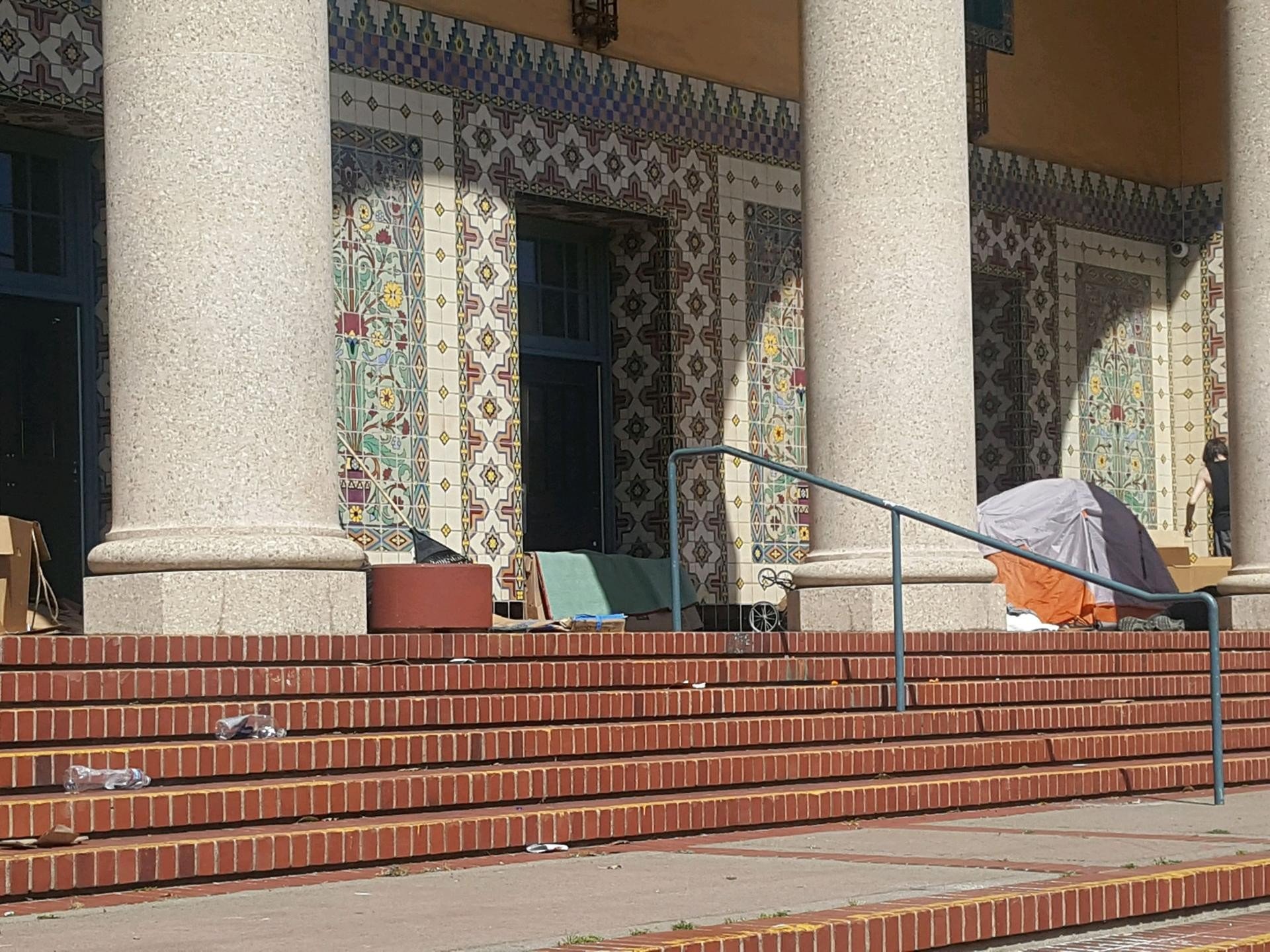 Tent dwellers camp on the steps of Everett Middle School in the Castro. In late April, San Francisco officials voted to create socially distanced encampments for homeless residents, and the school has become one of several sites in that program. Courtesy Carolyn Kenady

Brian Howey, Reporter |
LikeTweet EmailPrint More
Demand among homeless San Franciscans for the 40 slots the city is making available in its Haight-Ashbury safe camping site has outstripped supply, even as more than 1,000 hotel rooms and trailers meant for vulnerable residents sit empty.

Residents began moving into the site May 19, and at that point demand for spaces had already exceeded availability. Around 60 people have requested to stay at the site, which has space for only 40 tents, Mary Howe, director of the Homeless Youth Alliance, said in an email. The group is one of two nonprofits that run the city’s second sanctioned homeless camp with assistance from the city. As of Wednesday, the alliance had placed 19 people in 16 socially distanced tent spaces at the site, a parking lot at Haight and Stanyan streets.

Meanwhile, 46% of the of 2,373 hotel rooms and trailers acquired by the city for vulnerable residents, including unhoused people, remained empty as of Wednesday, the city’s data tracker showed.

“Having a safe place to be is an act that greatly improves a person’s well-being,”said Howe. But with the mismatch between supply and demand, she added, “People will still live outdoors.”

The first sanctioned camp, on Fulton Street near City Hall, holds 50 tents, and the city is looking at additional locations for future camps.

“I believe as a society we can do better,” Howe said of the city’s efforts to house homeless residents in hotel rooms. “We support housing as a solution to homelessness. Housing also provides dramatic protections to increase people’s physical and mental health as well as their overall well-being. There are also many factors currently at play in S.F. and nationwide that makes the safety of those living outdoors paramount.”

Officials with the city’s Human Services Agency and Department of Emergency Management did not respond by the time of publication to emails requesting comment.

Several district supervisors have repeatedly urged the city to provide more hotel rooms for vulnerable groups during the pandemic, particularly the unhoused, even passing emergency legislation in April requiring the city to acquire 8,250 hotel rooms to house unsheltered homeless residents. Mayor London Breed refused to sign the legislation, citing the high cost of the rooms and logistical challenges related to staffing them.

“No one should be surprised that during a pandemic that unhoused folks are rushing to be included” in hotel rooms and sanctioned encampments, said Jennifer Snyder, chief of staff for Supervisor Dean Preston, whose district includes the Haight. “The solution is working; we just need to ramp it up.”

Jennifer Friedenbach, director of the Coalition on Homelessness, pointed out that the number of homeless deaths in the city had tripled compared to last year, a development the coalition and other advocacy groups blamed on shelter-in-place orders they say have forced many onto the streets.

“We firmly believe that many of those deaths could have been prevented if folks had had access to those rooms,” she said of the hotel rooms acquired by the city. The sanctioned encampments “represent a step up for the unhoused community. Obviously, that’s second to the importance of hotel rooms.

The city’s placement of the Haight-Ashbury campsite sparked a federal lawsuit against the city initiated by the owners of neighboring businesses Amoeba Music and Escape From New York Pizza, who said the site violates the constitutional rights of the neighborhood’s housed residents by causing an increase in crime and disease in the area.

The Haight-Ashbury Merchants Association voted unanimously to support the city’s campsite plan. “Only 14 or 15” neighborhood business owners have publicly announced their position on the site, said Christin Evans, president of the association. The opinions of those that made their views public were “split somewhat evenly,” she said, noting that some business owners may have accepted the camp begrudgingly.

“There’s a difference between being unhappy about that choice and being resigned to it,” she said.