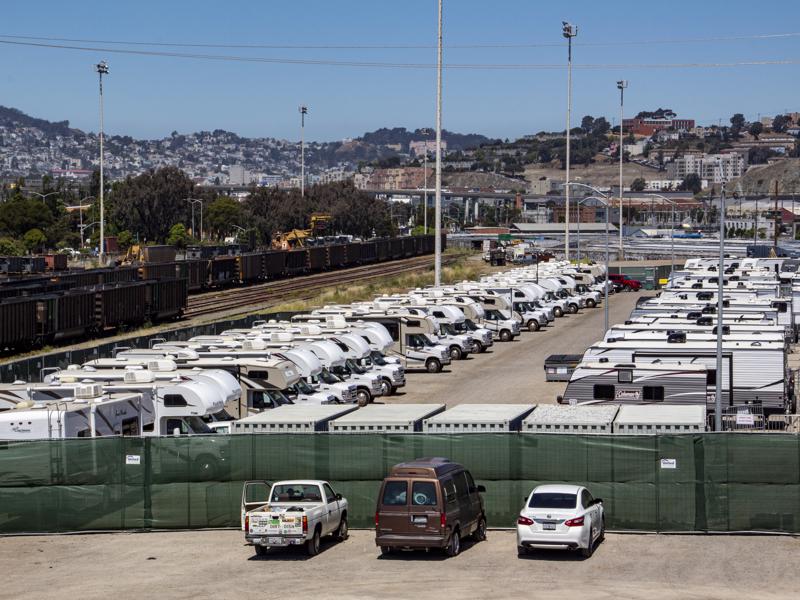 San Francisco has spent close to $500,000 on rented recreational vehicles that were meant to house the homeless during the coronavirus pandemic but have not been used. Brian Howey / San Francisco Public Press

Twenty-nine recreational vehicles leased by San Francisco to house homeless residents during the pandemic were never used for their intended purpose, an endeavor that may have cost the city as much as half a million dollars, a city official confirmed.

“There isn’t anyone in the RVs right now and we hadn’t moved anybody in,” said Human Services Agency spokeswoman Chandra Johnson.

The city leased the RVs in early March to house people who were unable to shelter in place on their own, such as unhoused residents. In mid-April, the Public Press revealed that the RVs had been sitting empty in a parking lot near Oracle Park for a month. At the time, Johnson said the delay was caused by bureaucratic hurdles, staffing issues and the challenge of finding an appropriate site for the camp.

In early May, human services, the Department of Homelessness and Supportive Housing and the Department of Public Health moved the 29 RVs and an additional 91 trailers provided by the California Office of Emergency Services to a site at Pier 94.

The agencies began relocating homeless people living on the streets of the city’s Bayview neighborhood into the trailers May 13. As of Thursday, the city had placed 97 people in 83 of the trailers, some of which housed couples who lived together before being placed there, but no one had been moved into the RVs, Johnson said.

The agencies wanted to avoid uprooting residents from the RVs when the city returned them this week, she said. The city plans to buy the same number of trailers to replace the RVs for “about a half million dollars,” an amount similar to what the city paid to rent the RVs, she said, adding that she could not clarify the exact price of the RVs or trailers.

If Johnson’s estimate is correct, the cost of renting the unused RVs is equivalent to that of renting 219 emergency hotel rooms for one month, according to a $76 per-night cost estimate from human services director Trent Rhorer in early May. The estimate does not account for refunds promised by the Federal Emergency Management Agency to cities that use the rooms to house vulnerable homeless people over the age of 65 or with underlying health conditions.

Rhorer and Mayor London Breed, projecting a $1 billion budget deficit, have repeatedly said that the cost of renting the hotel rooms kept the city from housing more of the city’s homeless and that the city should be careful not to overspend on the rooms unnecessarily — a mistake that could cost the city precious funding. “We don’t want to be renting 3,000 rooms that sit empty for a couple weeks,” Rhorer said in an April press conference. Just five weeks later, the San Francisco Chronicle reported that the city had for several weeks been spending more than $30,000 a day on hundreds of empty rooms.

Supervisor Matt Haney called the city’s failure to use the RVs “shocking” and “ridiculous.”

“The repeated instances of mismanagement are astounding,” he said. “It appears that they’re willing to waste money if it means doing things the way they want to do it, including leaving people on the streets.”

Haney, a vocal critic of what he has called a reactive plan by the city to house the homeless during the pandemic, is one of a handful of progressive supervisors who have urged Breed to take a proactive stance toward protecting the homeless by acquiring and filling more hotel rooms.

After the city returns the RVs, the three agencies running the site at Pier 94 will replace them with 29 trailers, Chandra Johnson said. People will be placed in all but five of the trailers at the site, the remainder of which will stay empty in case an occupied trailer requires repairs and the occupants need to switch, she said. She added that the city will allow people to stay at the site “throughout San Francisco’s declared health emergency.”

The camp consists of several neat rows of trailers. Mobile bathrooms with showers bookend the rows, and a shuttle service carries residents to city transit lines and a nearby pharmacy. Private security guards check the temperatures of visitors and city social workers are on hand to assist residents at all hours.

On May 27, Darnice Coleman stood waiting for the shuttle as she pulled a homemade mask over her face and shielded her eyes from the dust. She moved into the camp on day one, she said.

“It’s peaceful,” Coleman said of the camp. “Everybody respects each other here.” She used to live in a tent in the city’s Bayview neighborhood, Coleman said. Now, she lives in a vehicle in the camp, where she gets three meals a day and full-service restroom facilities, including showers.

“Everything is clean in there,” she said. “I’m feeling safe.”

Supervisor Shamann Walton, who represents the district where the trailers are located, wrote in an emailed statement that he sees the camp as a “great site” for housing the district’s homeless, but that 120 trailers was “not the complete answer to addressing homelessness.”

Walton’s reservations stem from a months-long standoff between the supervisors and Breed concerning the city’s strategy for protecting its homeless population during the health crisis.

As of publication time, the city had acquired 3,178 hotel rooms and trailers for the city’s homeless, front-line workers and other vulnerable populations. Only 1,483 were occupied.

On Wednesday, a month after the supervisors’ legislation would have provided the extra rooms, several supervisors, a pastor and a physician working in one of the hotels challenged Breed in a press conference to provide a plan to place more homeless residents in hotel rooms.

“We have a city covered by people living in human misery in almost every single neighborhood in San Francisco,” said supervisor Hillary Ronen. “We are sick of press releases and cleverly named programs or initiatives that do nothing. What we want and what we’re begging you for is for action, for change and for results. That’s what we haven’t seen from your administration.”

CORRECTION 5/29/2020 12:47 p.m. Appends additional categories to list of residents for whom city has set aside hotel rooms.